I'm me so you will either love or hate me. 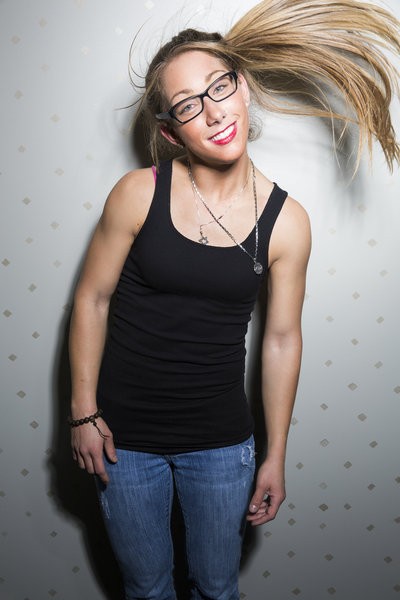 The Real World is back for its 30th season and now there are Skeletons in the closet. Seven strangers are still picked to live in a house but this time their past comes back to haunt them. This is a return to the Windy City for the Real World featuring a new cast, new location, and new attitude. The fourth wall is even broken down at times with cameras and producers revealed in a new way of filming the iconic television show. This season is gayer than ever as two of the male roomies have gay brothers who visit during the course of the run.

Jerry Nunn dropped in on the decked out house to interview the cast in the West Loop on Randolph Street with lesbian cast member Nicole Zanatta.

NZ: I never have been to Chicago before. There were a bunch of comparisons to New York.

JN: Was it hard to get on the show?

NZ: I am a triplet. I am 23 and an EMT. I work out and like to have a good time. I'm me so you will either love or hate me. That is it and what I brought to the table.

JN: I'm happy to see a lesbian on the show.

NZ: The hottest lesbian on the show, please!

JN: How was it interacting with everyone?

NZ: The guys I clicked with. They are the boys of the house and the ones I will be best friends with. The girls on the other hand were different because I don't do make up or necessarily know how to dress. A jeans and t-shirt is my perfect night. Did I connect with all of them on different levels? Yeah.

JN: People were nice to you?

NZ: Yeah, no one really judged. No one said, "This is the lesbian of the group." No one did that. Was it known that I am a lesbian? Of course it was. You could clearly see it as soon as I walked in.

JN: Did you take the group to the gay bars?

NZ: We did Boystown a few times.

JN: What is your type of girl?

NZ: Feminine. You have to be classy and know how to dress. I think that is attractive. You have to be able to carry on an intelligent conversation. The perfect wife-y type is someone that goes to the gym too or be willing to get out of their comfort zone and do something different. I'm looking for someone to have a good time with.

JN: Did you come into the house single?

NZ: I came into the house single and I left. Did I have a girlfriend? No, but there people I was seeing. As a lesbian we all know that our ex girlfriends are people we will always go back on.

JN: Was it hard to meet people in Chicago?

JN: Since we don't have a specific lesbian bar here did you meet women at the gay bars?

JN: Do you want to use the show as a platform in the LGBT community?

NZ: Yes, I think women should definitely come out. There is nothing to hide or be ashamed of. I am definitely willing to talk to people about it. It is important to be comfortable in your own skin. You have to be. If not then there is no way to inspire other people. You are not going to.

JN: When did you come out?

NZ: I came out at 16 years old actually with my first girlfriend. I came home with a gorgeous girl. She had a beautiful body and was older. My mom was very accepting as well as my whole family.

JN: Do you think it was easier to be out of the closet because being in New York?

NZ: Maybe. I can't really answer that because I haven't traveled much.

JN: Did you try the food in Chicago?

NZ: Are you kidding me? When I went out I went out! We did kayaking, we saw The Bean, and we went to Navy Pier. It was beautiful. Chicago was everything I wanted it to be.

NZ: It was a great experience and challenging as well. You put seven strangers into a house you are going to be faced with challenges, mentally, physically, and emotionally. You have no control over it.

JN: You have a strong personality.

NZ: I do and at first the cameras were awkward. I didn't care for that but this is what I signed up for. You gotta play ball!

JN: You have to want to do the Challenge show in the future.

NZ: I would love to do that. I hope to God they call me. I would go in a heartbeat! No one would be competition but myself.

JN: Have you always been good at sports?

NZ: Yes, my entire life. My mom always told me to go outside and play. With two sisters there was always something to do.

JN: Your sisters are not lesbians?

NZ: No, they are both straight and both engaged.

JN: Where do you meet girls?

NZ: I think the bar is great because you are drinking and cutting up. If you are walking down the street and don't say anything to someone you are attracted to then that is a missed opportunity. I think someone is attractive then I am going to say something.

Real World: Skeletons comes out of the closet every Tuesday at 9 p.m. Central. Visit http://www.mtv.com for more details.