Comic relief: Adam Guerino and Trannika Rex interview each other 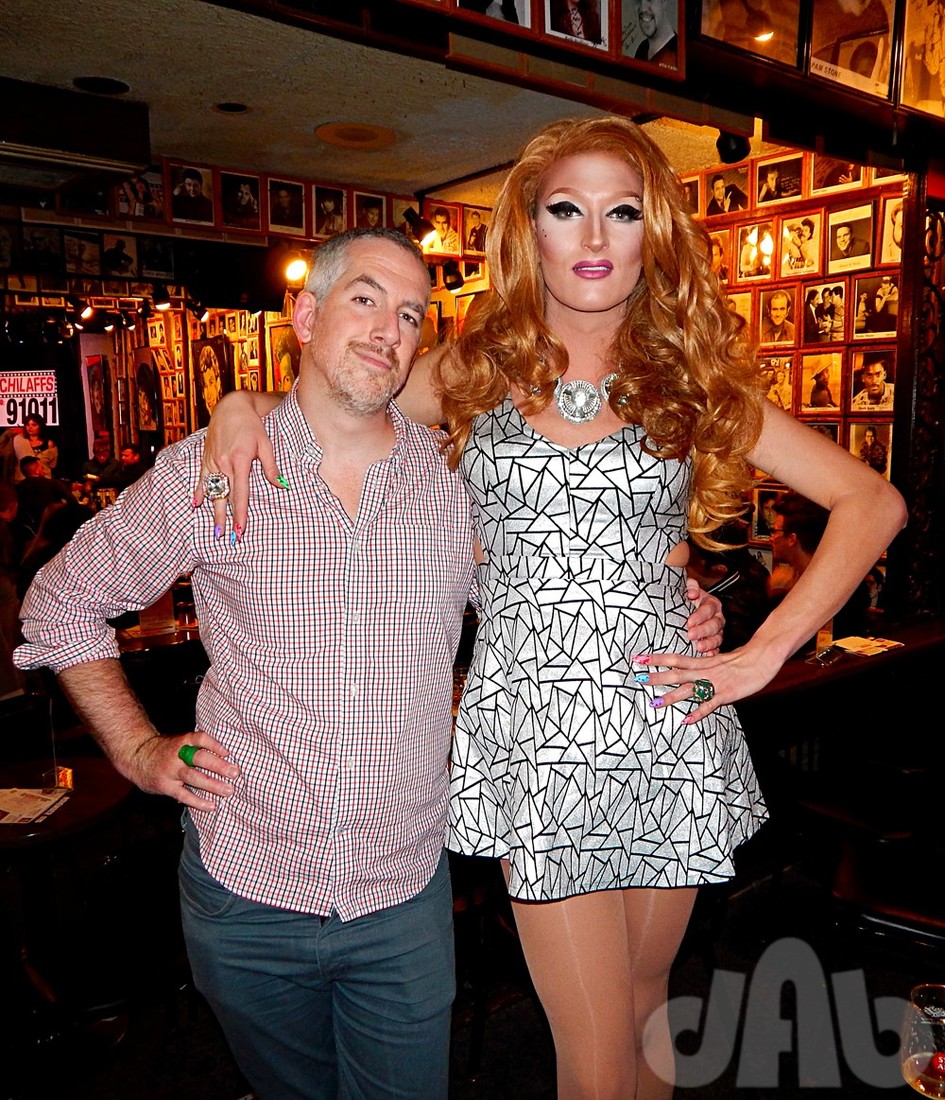 First, Guerino asks Trannika Rex a few questions about the name of the show and strangers sitting on her face. Rex is one of the biggest names in drag, running a weekly drag show (Berlin Drag Matinee on Saturdays) and a monthly drag show (Trannika's Most Wanted at Scarlet) while performing comedy and hosting across the city. Her name isn't the only thing that's big, at seven feet tall and a stage presence to match, Rex is unforgettable no matter how hard you try.

AG: (Adam Guerino) I can't take credit for the name Piss & Vinegar, it was your brilliant idea. No pun intended but how long have you been sitting on it?

TR: (Trannika Rex) Piss & Vinegar is characteristically crass and it's a southern thing my family would say. It's also not something that you would claim about yourself, it's more of something your parents would say about you after you wrecked your car for the second time while singing to Britney Spears loudly and aggressively tailgating a Honda Civic in the rain when you were sixteen.

AG: How long have you wanted to do comedy?

TR: I took stand up classes at my local theater in middle school. I wrote skits that me and other kids would perform at summer camp. I think the proper answer would have to be always. I could literally be on stage every night of my life and never get tired of watching people laugh. I really like making people laugh. I laugh when I make other people laugh. I'm an only child and my grandpa encouraged to write as much as I could and create characters so all of these one-liners and situations just roll around my head waiting for a chance to be used. I spend a lot of time making up situations and rehearsing them in the shower. I've always done that. Ok, the answer is always.

AG: Who is your favorite comedian to see?

TR: Bo Burnham is one of the most incredible comedians around right now. He's self aware, kind of gay, and he puts himself out there like no one else. The first time I watched his special I had to stop it because I was literally weeping tears of joy and laughter. When I watch him I feel genuinely proud of him. He's like 23! Locally, Rachel McCartney makes me laugh violently. Even when she's doing jokes I've heard before, the grace in her delivery is just so beautifully uncomfortable that I could watch it forever. She could tell Joe Rogan jokes and I would probably still be crying. The Puterbaugh sisters get a really hearty laugh out of me too. I like comedy that's approachable and feels natural. With them, they're completing each others sentences and you can just feel the insane, ridiculous, frustrating love they have for each other. There's something poetic about their screaming, babbling sets that give me the biggest smile on my face.

AG: How does your drag look change when you're doing it for comedy?

TR: My looks are usually at their most extreme. It's pretty (to me at least) but it's also comical. Everything is a little larger and brighter than usual. Approachable. I tried going a little more traditionally pretty at the last Queer Comedy show and I think it affected my set negatively. I mean it wasn't a bad set but I wasn't on fire. I said I thought that I left my jokes in my other hair. For Piss and Vinegar I'm gonna dress like an asshole, don't worry.

AG: This next question comes from a friend in Chicago. After he walked by Scarlet when you were hosting their booth for Market Days, he wondered if you yelled, "Sit on my face!" to every guy who walked by, or just the cute ones?

TR: I try not to yell it a lot... Only when I'm really feeling it. If I yelled that at him he must be hot. It's my highest compliment... I guess probably my only compliment. I'm my father's daughter.

And to switch it up, Trannika Rex interviews co-host Adam Guerino, who is the creator of Outloud Chicago which has installed queer inclusive programming like Queer Comedy at Zanies in Chicago for over 3 years as well as created a national contest and tour.

TR: (Trannika Rex) Hi Adam! How are you today? It's 4PM and I haven't gotten out of bed yet, thanks for asking. So let's get started, how long have you been doing standup?

AG: (Adam Guerino) Hey Trannika, It's 9 p.m. and I'm laying on a bear-skin rug with nothing on but the fireplace. I started doing standup about 8 years ago quite accidentally. Much like how I begged you to do a show with me, someone asked me to do their comedy night because, "Hey, you're funny."

TR: You are to the comedy scene why I am to the drag scene: the curator and MC. How did you start hosting all these things?

AG: Doing standup, I met other comedians that I adored and it wasn't even 6 months into performing that I started putting shows together. I don't know if it's nature or nurture but I just felt compelled to create the shows with the people I wanted to see. And I've found that it usually works best when someone hosts their own show from both technical to branding standpoints.

TR: If you had to watch one local comedian for the rest of your life, who would it be?

AG: Other than you? BUT SERIOUSLY. It's tough. There are very few comedians that I book that I'm not a huge fan of. I guess I feel a special fondness for Rachel McCartney, same as you, as well as Marla Depew. We went on The Rainbow Connection tour this Summer and they are excessively hilarious. It was just one big road trip from city to city filled with barrel laughs on the interstate, after the show and, of course, during their sets. And one of my all-time favorites who won't be local for long is Candy Lawrence. I saw her performing in her sketch group with Laura Lapkus (who is now on Orange Is The New Black) and begged her to do standup at my show. We've been doing standup together ever since and she's constantly an inspiration for hilarity and friendship.

TR: What is different about Piss & Vinegar compared to your other shows?

AG: Like other producers, I started producing comedy shows with just the enjoyment of booking comedians I knew and liked. Then I started looking at what kind of shows weren't being done and filling those voids. After a while, I began expanding the concepts to help with branding and audience building by making it easier for people to understand what the show is even if they didn't recognize the names. For the last five years, I've produced queer explicit shows either at gay bars or mainstream comedy clubs to support queer comedians and give a home to queer-inclusive audiences which has always included straight comedians and audiences but the branding helped the shows grow.

With Piss & Vinegar, I wanted to do a show with you. I like doing shows with you. I must be a glutton for punishment. When you and I brainstormed about the show, I figure we didn't need to make it queer oriented because a gay guy and a drag queen are hosting it at an anything-goes club--it's implied that it would be gay friendly. So it's different because 1) It's collaborative, based on our mutual interests and 2) There's no social or philosophical goal for "Why" we're doing the show, it's just an everyone-welcome, anything-goes comedy show that we love doing.

TR: Are you ready to answer a lot of hate mail now that you're working with me?

AG: "Ready?" Honey, we've been doing shows together for a while now, I've already gotten the mail. I even got a new stamp to use when people complain about you. It says, "Return To Hater."