Check out: Vera Farmiga on the success of Bates Motel

For me the name of the game is to present to you a woman who lives every day in the trenches of maternity. 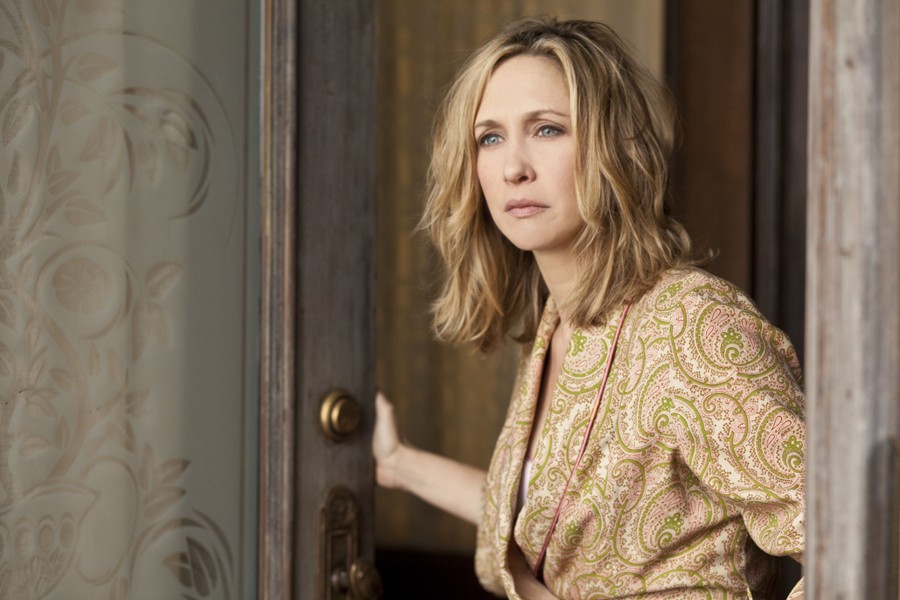 Actress Vera Farmiga has staked out a career that includes many unforgettable roles from The Departed to The Boy in the Striped Pajamas. Recognized by critics and fans alike, she was nominated for an Academy Award, Golden Globe, and Screen Actors Guild Award for the movie Up in the Air.

The Ukrainian from New Jersey scared audiences with films like Orphan and The Conjuring and now the 40-year-old star continues to scare fans on TV in A&E's Bates Motel, where she plays the iconic Norma Louise Bates. Farmiga's work was again recognized with a nomination for Primetime Emmy Award for Outstanding Lead Actress in a Drama Series for the first season of Bates Motel.

The second season of Bates Motel premiered last month and scored 3.07 million viewers, which marked a series high for the show. Jerry Nunn talks to Farmiga about the show's success.

JN: (Jerry Nunn) Hi, Vera. Congrats on season two of Bates Motel. Were you worried prior to season one about it being set in modern times?

VF: (Vera Farmiga) Yes. I'd be lying if I didn't have like some reservation about it when I was initially presented with the offer. I thought there is so many things that can go wrong. We're borrowing these characterizations or these plots points from the most successful horror film ever.

I think what assured me was when I saw Freddie's audition tape because it wowed me. I saw it. It became to me simply a story and is about this relationship between mother and son. I'm a mom of two toddlers. The story for me resonates.

JN: What mothering tips have you learned from Norma?

VF: I admire her tenacious love for her child. She goes to extreme lengths to give her child the life that she imagines for him. That is really valiant to me. I admire her generous heart. She's really disarmingly honesty. These are amazing qualities that she possesses.

The flip side of Norma Bates is that while her hardware is working, her software is a bit faulty. This is a story after all about family dysfunction. For me the name of the game is to present to you a woman who lives every day in the trenches of maternity.

JN: Will there possibly be a love interest this season?

VF: Yes, I mean obviously she's proved from first season that she's totally over anxious. She's too involved. I mean this is a woman who's been abused by her father, abused by her brother, discarded by demanding, unneeded by her older son.

She clings to the one man that has been her protector, her confidant, her consolation, the light in her life and it is Norman. She's too involved and unable to cut the cord.

The thing is that like women survivors of childhood sexual abuse, it's really complex. It impedes ability to trust especially if like Norma these demons are with them. These poisonous feelings that she has are embedded so deep in her psyche. She's never uprooted them. She has this vault, this sort of burial chamber, where she squashes all that sadness, stress and torment. She's got her own painful history also to contend with. She's got this rampart that she's built. It's like the walls of Constantinople. It's a lifetime of defensive walls that she has.

JN: Will we learn more about her background?

VF: Yes because I think what's happening is she's built this brick by brick. The ramparts are not so fortified anymore. She has the reason for moving out to White Pine Bay is to put as much real estate as possible between her and her past and these people that have been a part of this. All of this has developed sort of a really complicated psychological issues like depression that she squashes and low self-esteem, fear and guilt.

I feel like she's kind of driving the bus from the backseat is the way she is. I don't know how to explain it. Like the way she can function in society so far without not having dealt properly with it is driving this bus, or life, from that backseat.

I mean she shoves everything inside this vault and she just takes on this fresh and fabulous outlook on life.

For her I think the hotel success she equates to happiness, which is the one thing she's always struggled with achieving. She just throws herself into the hotel's success. That involves going out into the community and meeting people. She is trying to repair last season's word out in the street. There's already a negative association with her and what's happened at that hotel. So her mission at the start of season two is to sort of change that. That involves being more involved in the community. She develops friendships outside of her relationship with Norman.

JN: Do you like to know the storyline ahead of time or be surprised?

VF: I'm still figuring what it is that is part of my process. I've never had the luxury of a second season. I've done three series before and they all never had the opportunity to go beyond 13 episodes in the first season. So I know first season I did feel a little disabled. I wanted to sort of take it an episode at a time and not get ahead of myself. In hindsight in the experience of season one I felt sort of a big bomb land in the last episode. For me it was impossible to dig as deep initially with the root of this new character. I felt like Norman Bates was this like huge voluptuous shrub that I just had to trust in this kind of a shallow root system. I wanted to have the trajectory of second season. I wanted to have more answers at the start, which I was provided. So I think you're in for a better second season.

JN: What is attracting you to these scarier roles?

VF: Oh my God, you know, it's like my own beautiful internal logic about why I choose to participate. I think actually the projects choose us. There's this magnetism often times with dark subject matters.

Actually to be honest with you I find it dark stories uplifting. I think it's like during the darkest moments of our lives that we see the light. There's a lot of darkness in Bates Motel but again, there's a lot of joy. I choose to look at it through the lens of positivity.

I think our story is about dysfunction. It's dark. But it's a story about commitment, love, family, resilience and loyalty.

If you look at like the now close to 50 films that I've done. It's only like five of them that are actually like certified horror stories.

JN: Your sister Taissa is brilliant in American Horror Story.

VF: For her I'm bias. I'm practically her mother. She's just like this bright supernova that shines even brighter in the dark.

I just did Middleton which is where she and I play screwball mother and daughter in a romantic comedy. I think may be the most successful projects in my career have been psychological thrillers and horrors and sort of twisted, dark and offbeat.

Maybe it's because our childhoods were so straight and narrow and full of light, love and goodness that we veer toward them more.

I am attracted to the sordid and the wacky, the unorthodox but I love infusing it with lightness.

JN: This is a question from Twitter. Do you practice your screams or do they come naturally?

VF: Any extreme emotion I don't like rehearsing. Laughter is even harder to do than a scream for me. I'm a screamer by nature. My mom can tell you that I did a lot of screaming therapy as a child.

I don't practice it but I never quite know how it's going to come out and it never quite comes out the same way twice. It's like a jump off the high dive in the pool. You just go for it, drop your lower mandible and let it rip!

Bates Motel screams like a Psycho with new episodes on A&E Monday evenings at 8 p.m. CST. Visit AETV.com for complete listing and information.