For me, I actually enjoy listening to this album for the first time. 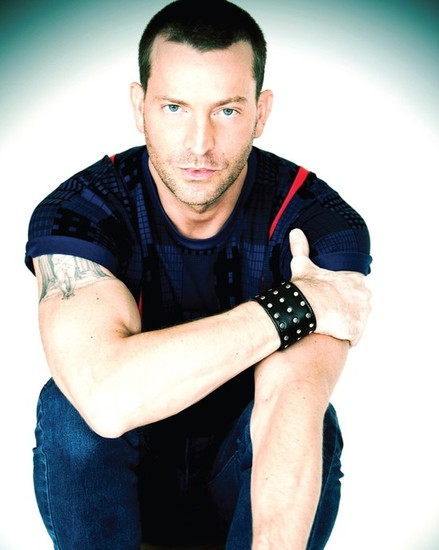 Paradise is here and it can be found on Imagine Paradise (Vision 9), the soulful new album by Tony Award-winning gay singer/songwriter Levi Kreis. The fan-funded recording features a dozen original Kreis compositions written for supporters who contributed at a specific level. The remaining financing fans are given their due on the album's front and back covers. A distinct move in a new direction for Kreis, the songs on Imagine Paradise take the best elements of retro R&B and dance and splash them with a fresh, funky and vivid new coat of paint. Just try to stand still when you hear "Any Way You Wanna," "Taking Back My Boogie," "So Much Better," "Love Revolution" and especially "It Ain't Over." The perfect soundtrack for your summer parties, the disc also includes ballads such as "What Love Is," an example of the kind of dramatic number on which Kreis established his devoted, supportive and generous following. I spoke with Levi shortly before the release of Imagine Paradise.

GS: (Gregg Shapiro) The last time we spoke, you were preparing to be Jerry Lee Lewis in the pre-Broadway production of Million Dollar Quartet. It's a part that earned you a Tony Award. Do you have a special of honor for your Tony statue?

LK: (Levi Kreis) [Laughs] It only just came out of the closet, Tony came out of the closet… I think some people would've approached that job from a very ambitious perspective. For me, my music has always been my job. This was an extra thing that I was grateful to have while I was going through a divorce, while I was getting sober, while, literally, every level of my life felt like it was falling apart. This was a great team of people to work with. When the Tony Award happened, I honestly felt like, "Holy shit, did I pull the wool over everybody's eyes?" I really felt like I wasn't worthy of it. I felt like, at that point, anything else that I did that people would find me out as a fraud. It really intimidated me. That's actually why I put it away. I came home that night and put in the closet, for real. I felt like it wasn't equal to it. Only recently did I take it out and put it up.

GS: That's good to hear, because you definitely deserved it.

GS: Did Jerry Lee Lewis ever come to see your portrayal of him?

LK: Jerry Lee Lewis not only came to see the show, he sat in with us on the encore. I got to play with him. It was the best experience of the whole thing. As a matter of fact, we got to spend a whole day together and the New York Times followed us around and wrote a whole story about it. He was very complimentary. I remember him saying, (in a thick drawl) "There's a lot of boys that tried to play me, but I tell you what, you're the only one that does it justice" -- which was a huge compliment.

GS: I'll say. Once you get that seal of approval…

LK: …you can't get any better than that [laughs].

GS: How would you best sum up the Million Dollar Quartet experience?

LK: Going back to how I described to you why it was hard for me to accept that kind of accolade, I have to say I can sum up the whole experience as a huge lesson to believe in myself. I still feel like I'm that awkward, six foot, 125 pound, swishy gay kid from Tennessee. No matter what we do or how we change our body or how many great friends we end up having, there's always a little bit of that that still lives in us. That forced me to look at myself and say, "You really do have something legitimate to offer this world and own it and use it. Quit doubting yourself."

GS: I would like to shift gears now and talk about your new CD Imagine Paradise, beginning with the CD cover on which you appear naked except of the names of your project backers written all over your body.

LK: I went through another concept for the album which was an illustration that sort of embodied all the images that, for me, was Paradise. I imagine my life with the palm trees, with this, with that. But then I was like, this really isn't about me. This is about the people who actually created this album by lending their stories and their life experiences for me. I went through 100 different ideas, but it was just one of those moments where it's like (sings like an angel) "Ahhhhhh," a big a-ha moment. This is it! What better way for me to honor them than to get all of them on my body and wear nothing but them. That's what the project is, it's nothing but them.

GS: Fan-funded CDs have become big news, especially after Amanda Palmer's million dollar Kickstarter example. Was it a good experience and is it something you would do again?

LK: It was a fantastic experience. Because of the way I approached it and the way my fans generally are, we cultivated an intimacy that I don't think we would've had the opportunity to cultivate had we not had that experience. I wouldn't do it again because I actually honor the concept of Kickstarter more from the perspective as a business loan. If you are actually able to get that kind of money, you want to look at how you are doing business and how you can impact the album in a way to then bring the funds to do the next one. I don't think artists should live off of Kickstarter. I think they need to take advantage of it and then find a way to make it a one-time investment for them. I think that what honors my fans more in the long run is if I can say thank you for supporting this, now watch what I can do with this to help cultivate my own business.

GS: Each of the 12 songs was written for a backer. Did they make specific requests as to the subject matter or did you have carte blanche?

LK: There was a certain incentive; whether you came in at $1000 or $2500 you would get your own personalized, custom written theme song. Once they made their pledge and the Kickstarter campaign was finalized -- some of them I yapped on the phone with for a few hours, others I just e-mailed; whatever their preference was. Some people had very little to say, some people had a whole lot to say. It was my job to take the core emotional experience of their life situation and liken it unto my core emotional experience of a situation.

GS: Imagine Paradise is your fifth full-length disc. In what ways would you say that you've evolved as both a songwriter and a performer?

LK: I look back on the albums of my past and I can't help but acknowledge that they were often created from an economical standpoint. For instance, (first album) One of the Ones, I had $200 in my pocket, I only had these eight songs left from the deal with Atlantic Records, and I literally went into a studio in New York City and asked the guy behind the front desk if he would please does let me go in and play one-time through the songs. That was the album. I look at Gospel… where we went from a $200 budget to a $3000 budget, which I thought was remarkable. But we're still in the living room, working with old equipment and it's just me and someone else. Along the way, I also think that what informed the albums was that I had an undue concern for what was hot at the time. For instance, The Gospel According to Levi was (recorded) around the time of Kelly Clarkson's big hit "Since U Been Gone" and you can hear whatever was hot in the day in that particular album. Why I love Imagine Paradise so much is that I finally let that go and decided that I wanted to do the music that I like to listen to. Some of my friends over the years have introduced me to the greatest music of the late 70s and early 80s, when the black and gay communities were creating these anthems of freedom. I'm coming out of the closet with that, that's what I listen to, that's what I have on repeat. I don't listen to my old albums because I never would listen to that style of music. This is actually the style of music I would listen to. For me, I actually enjoy listening to this album for the first time.

GS: I'm glad that you mentioned the "anthems of freedom" because "Love Revolution" is one of your most political numbers.

LK: I stay out of politics. This is actually the first time I have delved into it. I don't think I could've honored the story of Richard Friend, who inspired it, without speaking that. He was a political activist, he was reaching out to our HIV/AIDS victims at the height of ACT UP. He was building organizations. He was caring for people. For me, number one, it was about Richard. Number two, yes it was about the genre and the work does lend itself to that. But primarily it was to honor him in his journey. But then the result of what Richard has brought me is that I now feel comfortable talking about those kinds of issues that I never had before. As a matter of fact, "Love Revolution" is the second single. It looks like there will be a remix competition where 100% of the proceeds will be going to, I believe, Positively Living in Knoxville, Tennessee, which helps fund clothing and food for those who are living with HIV and AIDS. Because it's hit me in a personal way that has infused a passion about it that I can't not articulate.

GS: Gay singer/songwriter Sam Harris joins you as duet partner on the song "It Ain't Over." How did that come about?

LK: I wrote "It Ain't Over," had recorded it, it was done and it wasn't working. I sat there and said, "Why is this not finding the life that it needs?" I have been joking for a few months in the studio about how fun it would be to have a Barbra/Donna moment [laughs]. I had just finished working with Sam on the New Year's thing and I wondered if you'd be interested in making this duet. We rerecorded the tracks from square one, made it a duet and then it came to life. It's perfect now for what it is.

GS: With summer just around the corner, "It Ain't Over" sounds like it was custom-made for tea dance in Provincetown. What would it mean to you to be a dance divo?

LK: When I played this album for Larry Flick over at Sirius Radio, he said, "This is your coming out album! This is the gayest thing you've ever done!" [Laughs] I said, "Thank you!"