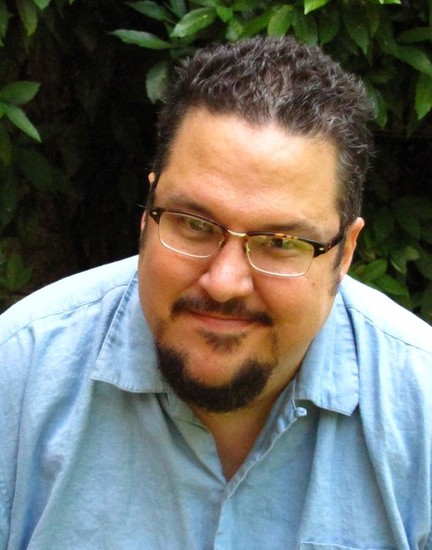 Speaking Wiri Wiri (Red Hen Press, 2013) by gay poet Dan Vera is the winner of the inaugural Letras Latinas/Red Hen Poetry Prize. The book, Vera's second full-length collection, consists of 45 poems in five distinct sections. Taken as a whole, without the "borders," if you will, there is a cohesive voice and message. Latino, queer, son of immigrants, fascinated with language and memory (two of the sections are "The Trouble With Memory" and "The Memory Of The Tongue"), Vera's book couldn't come at a better time, especially with immigration reform and LGBT issues on everyone's mind. Writing with authority, assurance and passion, Vera's Speaking Wiri Wiri earns him his rightful place alongside his poetry heroes, living and dead. I spoke with Vera shortly before the publication of his book. (Full disclosure: Dan Vera's press, Souvenir Spoon Books, published Gregg Shapiro's 2012 chapbook, GREGG SHAPIRO: 77.)

GS: (Gregg Shapiro) Dan, at what age did you seriously begin to write poetry and how did you come to it?

DV: (Dan Vera) I began writing poetry in college during the lead up to the first Iraq War. This would have been 1989. The country was gearing up for the war and although the news was filled with reports, including talk of the possibility of a draft, there seemed to be little conversation among my circle of friends about the impact the war could have on my generation. As it turned out, the war was short, but as the subsequent years have revealed, it proved to be a skirmish in a longer war that we are still involved in almost 25 years later. That region has defined our generation in a way. Back then poetry allowed me a way to express my own concerns about this war. I don't know why it was poetry, but it arose through poetry and when I shared it with friends they seemed to find a resonance with the fears and questions I was raising. I kept writing, mostly as a solitary act and didn't seriously begin to write poetry, to dedicate myself to it, to immerse myself in it, until many years later.

GS: Where does prose fit into your writing life?

DV: I've written some essays on gay identity and history which probably come out of my academic background in anthropology and history. Prose is certainly something I haven't ruled out in the future. In many ways I see my writing as storytelling and uncovering and retelling histories that are worthy of recording.

GS: Your first book of poems The Space Between Our Danger and Delight was published in 2008. How did the process of compiling that manuscript differ from the experience of creating the manuscript for your new book Speaking Wiri Wiri?

DV: They were radically different processes. Space Between consisted of poems that had been written over a long period of time – ten years, I imagine. For the longest time I just couldn't make sense of cohesion between those poems – there didn't see a thematic spine to the beast. My publisher and editor, Michael Gushue, really helped me discern a narrative arc in that collection of poems. Poems represent singular points in your life, compass points of where you are on the map of your life, what concerns you and what you see. Taken as a whole they don't immediately appear to have a connection with one another. The process of putting that manuscript together revealed the preoccupations that have compelled me to write and the kinds of poems I write. The minute that first book was published I was faced with the question of what I would write now that my cupboards were bare. How do you write a new book? I started to seriously think about my curiosities and passions. I started to compile news clippings and put down ideas I wanted to explore and questions I wanted to answer, about my life, about my family, about a certain lack of history. The bulk of the book was written over a month-long residency (at the Virginia Center for Creative Arts) in Southern Virginia. I brought with me ideas and images of historical figures and family members, ancestors and the living. They all went on the wall. And every day I walked into my writing studio and tried to write about these figures and tell their stories. It was the most intense month I've spent as a writer. The manuscript was culled from these poems. So, in a real way they represent where I was at that time and the people and histories I brought with me to that place. The book is filled with stories of people I have struggled to make sense of for a very long time.

GS: In your poem "The Interrogation of Poetry," from Speaking Wiri Wiri, you write about the poet Pablo Neruda. Who do you consider your poetry heroes?

DV: Well, Neruda is certainly one of them. I used to joke that my life was like the first 19 minutes of The Wizard of Oz until the day I picked up a volume of Neruda (it was William O'Daly's translations of Libro de Preguntas) and my life went Technicolor [laughs]. I'd been writing (for) a few years but that volume unlocked something inside of me somehow. My other poetry heroes would include Emily Dickinson for her persistence to write in solitude and her engagement with the world through her writing. There's something rather heroic about that. Now there are other poets whose work has inspired or influenced me from time to time and for a variety of reasons: Nemerov, Ginsberg, Doty, Seiferle, Nye. But my reading tastes are rather broad.

GS: Speaking Wiri Wiri is the inaugural winner of the Letras Latinas/Red Hen Poetry Prize. What does that honor mean to you?

DV: Certainly, there's a sense of validation with the prize. As a writer whose academic work has been in other fields, whose studies in poetry have been largely autonomous, it reassures me that I'm on the right path. But the honor comes with a great responsibility because I recognize the importance of this second book prize for Latina/Latino literature. My story is merely one of many in a larger project to open up what it means to be a member of this society. To the extent that I can be part of inviting other writers to be part of this much-needed conversation about identity and belonging, I'll be happy.

GS: Speaking Wiri Wiri is divided into five sections. The titles of the first three sections begin "The Trouble With…"

DV: The first three sections are titled "The Trouble With Language," "The Trouble With Borders" and "The Trouble With Memory." While I certainly didn't go into the writing of these poems with these ideas in mind, I started seeing some recurring elements as I put the completed manuscript together. Those titles are a blunt admission that we are never perfectly served by language, borders or memory, which seem to me to be porous and malleable by time and repetition. We cling to language and borders and memory in a vain attempt to give some control to our lives, to make sense of life – our identities are tied up with these matters. I just feel it's important to be reminded that language and borders and memory are fluid and liable to change. I love discovering these layers of meaning that serve as a trap-door for anyone trying to be rigid about identity: our own and others.

GS: Two dog poems, "Cadúco" and "My Double," close section three. Can you please say something about the role that dogs play in your life?

DV: To the extent that, aside from my husband, I spend the bulk of my time with dogs, these creatures that connect me in some way to a world outside of my human-centered experience of the world, they play a huge role in my life. We are crazy dog people [laughs]. There's no reason to be shy about that. I didn't grow up having dogs; I came to have dogs as an adult and as a writer. So dogs have been a source of contemplation for me about how we go about in the world. And having lost my first dog rather suddenly, the loss taught me invaluable lessons about mortality and about being present in the midst of suffering and being open about grief.

GS: The poem "Ambrosia on Four Legs" opens with an epigraph by gay, Cuban poet Richard Blanco. As a gay poet of Cuban heritage, please say something about the tradition of queer Cuban writers, which also includes Achy Obejas and the late Reinaldo Arenas.

DV: Those three poets have been sources of great pleasure and reassurance for me. Certainly as a Gay Cuban kid who grew up in South Texas, their being gay and Cuban meant a lot to me. I remember finding an immediate resonance with Obejas's We Came All the Way from Cuba So You Could Dress Like This? Here was a writer mediating these multiple identities. I came to Richard's work much later and found a kindred writer exploring mixed identity and sifting through family memory. Our similarities may be more aptly a part of the immigrant writers' tradition, certainly first-generation writers that are struggling to mediate these multiple identities here in the United States. As for Arenas, his memoir Before Night Falls served as a priceless testament of the repression faced by queer people like me in Cuba. It certainly wasn't new for those knowledgeable enough to remember Allen Ginsberg being kicked off the island for being a "perverse" influence on Cuba's young people. But to my mind, Arenas belongs to that rich tradition of Gay Cuban writers like Lezama Lima, Virgilio Piñera and Severo Sarduy. As in all cultures, gay people have been among the central pillars in Cuban culture. Unfortunately they've been largely sidelined or silenced in the last fifty years.

GS: What did you think of the poem that Blanco read at President Obama's inauguration in January 2013?

DV: I loved Blanco's ability to thread the personal with the aspirational in that poem. That's never been done in an inaugural poem and (it's) a hell of an accomplishment. He managed to find a way to be communal and meditative at the same time. I loved what Elizabeth Alexander, the last inaugural poet, said about creating a moment of quiet in the midst of the pomp and pageantry. Richard did that but he also found a way to express the myriad and the shared. Just lovely.

GS: Have you started writing or thinking about your next book?

DV: I've begun preliminary writing on some poems. I've been doing more research and reading and my interest seems to be centered on a lot of forgotten history. I'm interested in how Latino history is tied up with the tension between America democratic and imperial impulses. But I'm also conspiring on an anthology of "crush" poems with a poet friend. For now I'm just happy to have the opportunity to share these poems with new audiences.