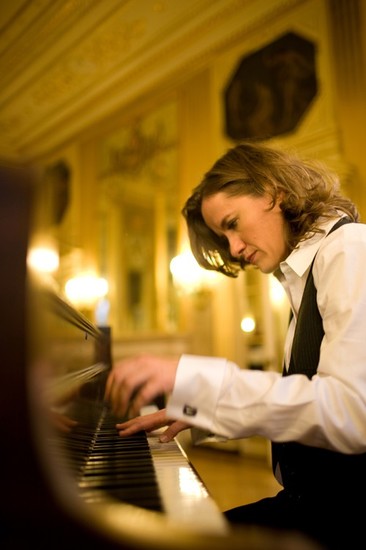 Local singer-songwriter Susan Werner is performing at the Auditorium Theatre of Roosevelt University this week. This is an up close and personal concert where the audience actually sits at tables onstage and the band plays from the seats.

Born and raised in Iowa, Susan has always danced to the beat of her own drum. She has crossed barriers not only being openly lesbian, but with her music as well bridging between folk, jazz, and cabaret.

Her last album Kicking the Beehive featured Vince Gill, Paul Franklin, and Keb' Mo. Her live set is not to be missed so buckle up for the ride this Saturday.

SW: (Susan Werner) I am good. It is a sunny day in Chicago, a little warm, but a nice time of year actually. I was in Andersonville a week ago. My partner and I were walking past Andies Restaurant and we asked if you were working. They told me you were working later that day.

JN: I work very sporadically there with all the events and writing I do.

SW: I was sorry to have missed you.

JN: Well, then I will have to make this show. Tell our readers about it.

SW: It really is a great show. It is the fourth time I have done this. What the Auditorium does is they do cabaret seating on the stage. There will be chairs, tables, and little candles on the stage. There will be bars on either side of the stage. You will be looking from the stage at the performers. Behind us are all the seats, the balconies, and the murals. It is seeing the hall in reverse. For people that have not seen this set up, it is the same view that Janis Joplin or Jimi Hendrix had when they played at the Auditorium. It is a great way to see the show and this particular corner of Chicago history.

JN: I saw you perform there last time.

JN: There were people lined up to see you.

SW: It is a great city and I happen to live here. You meet people in every aspect of your life. You go grocery shopping you meet people. It is a town where performers are just another kind of human being instead of being a celebrity of any sort. The connection is based in an every day kind of relationship, that suits me and the personality of the city.

JN: Are you going on to tour more after this gig?

SW: I record occasionally and perform constantly. I am gone every weekend playing shows. Last weekend it was Marquette, Michigan, then it is Chicago, then it's Wisconsin, then Nebraska. As a performer you are gone every weekend. What works out for me is that it gives a place to test drive material. I can write something on Tuesday, hammer at it on Wednesday, get it in shape on Thursday, then Friday night I am playing it in front of people. You can see how it works and if it communicates to people or not. In that way it is a stand up comics way of life. I personally like that kind of work. I like being scared that it won't work. I like the feeling of potential failure. It drives me to make a better show.

JN: Is it hard traveling when you have a partner?

SW: I think it is hard for anybody in a relationship to be gone a lot. Ideally you find a rhythm with it. Two essential elements to a successful relationship are time spent together and time spent apart! (laughs) The life of a songwriter guarantees time apart.

JN: You have a new DVD called Live at Stone Mountain?

SW: Yes, it hasn't even gone to the public yet. We will have it for sale at the show. Stone Mountain is in Maine. This is with my band who is just fabulous.

Trina Hamlin is on harmonica. She is amazing and a part time resident of Chicago. She should be on your radar. She is a great musical talent and no one is like her. She is a favorite of women's festivals across the country.

Gail Ann Dorsey is on bass. She is quite a celebrity. She was just out with Lenny Kravitz and Olivia Newton-John before that. She was David Bowie's bass player.

The fun of DVD is that it is not just music where they perform their own songs but we also do backstage footage. It is so much fun that we shouldn't be getting away with it!

JN: Are any of those musicians playing with you for Chicago show?

SW: Trina will be and also Natalia Zukerman will be with me as well. She is super smart and funny. She has toured the United States and Japan. I think many of your readers would appreciate her point of view. She will be doing her own show at Space on September 14th.

JN: What does she play?

SW: She plays bass and lap steel. Lap steel is a steel guitar instrument from the ‘30s. I will also have Andon Davis who plays guitar, and mandolin. People know him from cabaret shows at Davenports. The band will have something for everybody. There is zero chance for boredom that night.

JN: Are you playing new songs?

SW: Yes, from an upcoming project called Hayseed. It is all songs about farming, agriculture, and local growing. I am going back to the land, baby!

Look for Werner at Auditorium Theatre, 50 East Congress Parkway, on September 15 with tickets at auditoriumtheatre.org. Visit www.susanwerner.com for updates on Susan's music.