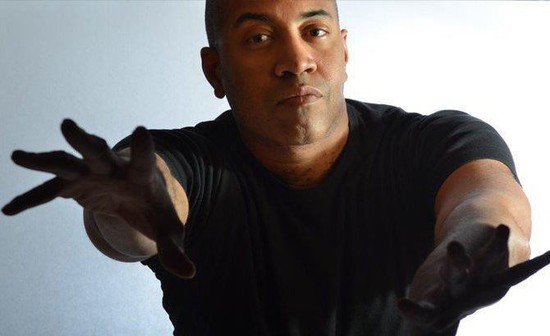 Chicago theater audiences have rarely been as lucky as they are in the case of Paul Oakley Stovall's brilliant play "Immediate Family," running through Aug. 5 at the Goodman Theater, 170 N. Dearborn in Chicago. In 2005, the play, at the time called "As Much As You Can," premiered at the Raven Theater, before being performed in a few other cities. Playwright Stovall, a performer himself, then went on to appear onstage in New York and in John Cameron Mitchell's movie "Shortbus." But now, with some revisions, including a new title, as well as a new cast, and direction by Phylicia Rashad, "As Much As You Can" is now known as "Immediate Family." The transformation is significant, and the play, a gay/African-American "August: Osage County" set in Chicago's Hyde Park neighborhood, ranks as one of the best of 2012, right alongside "Clybourne Park." I spoke with Paul Oakley Stovall about "Immediate Family" in June 2012.

GS: (Gregg Shapiro) There is a note "from the playwright" in the program for the Goodman Theatre production of "Immediate Family" in which you write about change. On the subject of change, why did you change the name of the play from "As Much As You Can" to "Immediate Family"?

POS: (Paul Oakley Stovall) The initial idea to change the name was not mine, and to be honest, I was resistant at first. As the revisions became more sweeping and the pace of the piece became much more urgent, the focus on the family intensified and the title change felt right.

POS: They have. My parents and brother saw it back in its first incarnation years ago with Dog and Pony and they attended the opening night at the Goodman.

GS: How much of Paul is in the gay lead character Jesse?

POS: Not as much as one would think. In the big picture, I find myself in all the characters, but I know what you mean. This particular story was sparked by the time I spent in Sweden. A man that I was dating wasn't quite ready to be fully himself let's say, and I found myself pretending to be just his friend. When I thought about sitting down to write this story, I obviously wasn't going to write it in Swedish about a whacky Swedish family, so I flipped it. So, I find more of myself in the character of Kristian, as far as the given circumstances of the play.

GS: Jesse has an amazing relationship with his lesbian best friend Nina (played by J. Nicole Brooks). Did you or do you have a best friend like Nina?

POS: I have and have had several Ninas in my life. J. Nicole Brooks is actually one of them for real, so it was quite easy in many respects to "put the words in her mouth". But Nina is ultimately a composite of everyone in my life who has been able to get close enough to me to feel like they could tell me anything...about myself.

GS: You address the subject of gay marriage in "Immediate Family." Civil unions were passed into law in Illinois in 2011 and now there is a push to make gay marriage law. Where do you stand on the subject?

POS: I stand firmly for marriage equality. Equality is the word. I'm not sure what "gay" marriage is. I'm fine with all religions. In fact, I find religion in general to be a fascinating invention of the human being. I don't, however, want anyone to ever force their beliefs on me. That's not cute....or fair...or legal.

GS: You mentioned religion which plays a prominent part in "Immediate Family." What role does religion or spirituality play in your life?

POS: Religion and spirituality play a very large role in my life. For me, religion means practice. One must ask oneself, what are things I practice? The things that I do over and over again? That is your religion. Do you spread and give love and understanding and kindness everywhere you go, with everyone you come in contact with? Do you make fairness and forgiveness your priority? Putting names on religions and thinking one is better than another is rather silly. We all live in the same world and we want the same things.

GS: The Bryants are highly competitive bid whist players. How are your bid whist skills?

POS: I'm at my peak, and if I weren't, I would never admit it in print [laughs]. But I've learned from the best – Ernest Perry Jr, Tonya Pinkins, E. Faye Butler, and of course my parents, to name a few.

GS: The Goodman production of "Immediate Family" has an "all-Chicago" cast, including actress Cynda Williams. How important was that for you?

POS: It wasn't a priority but I'm certainly pleased with how it affected the vibe. Several of the cast members grew up or currently live in the vicinity of the play's setting. They certainly bring an air of authenticity that is not easily put on the page.

GS: Phylicia Rashad directed this production of "Immediate Family." How did you come to work with her?

POS: I saw Phylicia burn up the stage in "August: Osage County" on Broadway. I went backstage afterward to say hi to Mariann Mayberry, Amy Morton, and some other Steppenwolfers. As I passed Phylicia's dressing room, I poked my head in and there were a bunch of New York actors in there that I knew. I slid in and stood to the side and waited for my chance to mumble, "Great job." I ended up saying, "I have a feeling we will work together some day." She hypnotized me with that regal gaze, said "OK", and I wandered off into Hell's Kitchen. Then, last July, I ran into Ifa Bayeza who was looking for a replacement actor for a workshop of her new musical, "Charleston Olio." I ended up filling in, and Phylicia was in the cast. Next thing I knew we were in Mississippi, working in a very close proximity. Afterward, I would send her the occasional email, and one day I got up the nerve to send the script of "Immediate Family," just to let her know that I'm a writer and, I don't know, I'm not sure what I was thinking. She read the script within a week and wrote me a lovely email back. Months later, as we neared pre-production at the Goodman, I felt that a change was needed, and I sought her out to see if she was interested in taking the reins. She had begun to flex her directing muscles, having been recently nominated in LA for her production of "A Raisin in the Sun." Lucky for me, it all worked out.

GS: "Clybourne Park," which won a Tony and a Pulitzer, and your play "Immediate Family," both deal closely with issues of class and race. What do you think that says about the current state of the culture?

POS: It's time. It's time to have these conversations. And not just about race and class, but about women's stories, about sexuality, gender issues, all of it. We've ALL been in the closet for too long in this country. Perhaps a certain president and his fabulous wife have nudged things forward in ways we didn't expect. And now is the time.

GS: Are there plans for a film adaptation of "Immediate Family," and if so, do you have a dream cast in mind?

POS: There are plans. The producers of this incarnation have also optioned the adapted screenplay, which I have completed with Laura Eason ("Sex with Strangers"). Laura and I also have about three viable television versions that we've done treatments for.

GS: Your new play – "Billie and Billy" – would that be Billie Holiday and Billy Strayhorn?

POS: It's not Holiday and Strayhorn but I'll get right on that!! [laughs]. The plot of Billie and Billy is a bit under wraps, but it deals with gender, personal power, the human instinct toward fight or flight, and how, as hard as we all try to be different, we are so so so much alike.

GS: In addition to being a playwright, you are also a performer. Are there any upcoming productions in which we can expect to see you, Paul?

POS: I'm acting/singing in workshops of two of Stew's ("Passing Strange") new projects. In one I'm playing the title character and the person he kills. It's called "Stagger Lee." The other is currently untitled. It's about...hmm...I'm actually not sure what it's about. But I do know that the workshop we recently did was one of the most personally inspiring artistic experiences I've ever had. I'm also focusing on my new cabaret act with Brad Simmons ("Lysistrata Jones") called "The Next Best Thing to Love." We'll play the new venue, 54Below in Manhattan, beneath Studio 54 on August 28th.