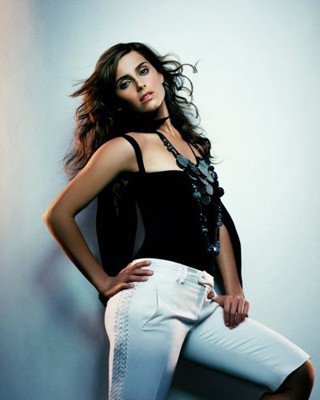 Grammy Award-winning recording artist Nelly Furtado, long a friend to the gay community, has had quite a year. In addition to promoting last year's Mi Plan, an all-Spanish language album marking her fourth studio release - and touring around the world, Furtado performed in the opening ceremonies of the Winter Olympic Games in Vancouver, held the reigns of her record label Nelstar and even acted in a film.

Ever a firecracker, Furtado stopped by the Windy City for the first time in several years for a performance at the Ravinia Festival this past weekend. The "Promiscuous" star delighted fans with a variety of songs including songs from Mi Plan, old favorites and even a few new songs she's "feeling out" for a new English language release expected sometime next year.

Just before her appearance at Ravinia, Furtado spoke in an exclusive interview with ChicagoPride.com about what's been keeping her busy and why she loves her LGBT fan base.

JE: (Joe Erbentraut) Nelly, hello! You are just getting back to the States from Europe, Poland specifically. How was playing there?

NF: (Nelly Furtado) It was good! I was in Warsaw last week for the Orange Warsaw Festival. Friday, I'll be in Chicago and I'm really excited about playing Ravinia. I haven't played a show in the U.S. for a really long time. Also Saturday, I'll be a special guest with [Brazilian performer] Ivete Sangalo for her debut at the Madison Square Garden. I'm looking forward to rehearsing for that show.

JE: What else have you been up to these days?

NF: I've been promoting my album - Mi Plan - which came out almost a year ago. It's all in Spanish and we did a South American tour this spring. We've got some more shows coming up in the U.S., a few things in Miami and Los Angeles. In Chicago, we'll be playing some songs from the Spanish album as well as songs from past albums. I'm also trying to work on an English album, but I haven't really focused my energy on that. We've played a few new songs in some recent shows to start and feel it out.

JE: And you're also busy with your recently-turned-seven-year-old daughter Nevis heading back to school. Do you have all her school supplies ready to go?

NF: Yes, I can't believe she's seven! It's pretty wild. And yes, I'm pretty organized, which you really have to be. It's rule number one!

JE: Your forthcoming album - Lifestyle - will be returning to the English language. How will that compare for you? Were there things you could get away with singing in Spanish that will be different for the new album?

NF: Mi Plan was really cool, working with Alex Cuba, who was my main co-writer on the album, completing my voice in Spanish. It felt like an explosion. I had these thoughts coming to me for lyrics, but I needed him to help the idea foment the way I wanted to show it. A lot of people also collaborated and were featured on the album, which makes it feel like a community effort. It was a really fun, soulful and joyful experience. It has felt so good through recording and promoting it, feeling the love outpouring from the Latin American fans around the world. Going back to English is fun and different. I haven't been recording songs in English for such a long time. I'm working with great people like Ryan Tedder and Saalam Remi, who's worked with Amy Winehouse, Jazmine Sullivan and all these great men and women. I've also had a ball messing around with some other people, like Mike Angelakos of Passion Pit wrote a really cool song with me. I'm having a really great time with it.

I recently covered a Rush song for a movie I made a cameo in - SCORE: A Hockey Musical - that will be opening the Toronto International Film Festival on Sept. 9. I appeared in the film and that song is used at the end of the movie. It's a Canadian epic. So who knows, maybe that song will be on an album, too? I'm just kind of brainstorming right now.

It's been a strange ride for me, with so many fans in Europe, Canada, the U.S. and Latin America all responding to my music and liking something different. I've dabbled in so many styles that it's impossible to be all of that all at the same time, and it makes it challenging to move forward quickly. I want to make sure I'm always creating something new that covers new terrain for myself to keep myself excited about what I'm doing. I am hearing from a lot of fans that they want to hear some of my b-sides and more acoustic stuff. I have so many songs that have never been released, but people have heard live or found them on the Internet. Now they have a bad mp3 file but they want the real thing recorded. So maybe there will be an acoustic album, followed by a smaller theater tour. I don't know. I'm just soaring along and doing my thing right now.

JE: Do you think acting is something we'll continue to see you doing more of?

NF: The acting thing scare the hell out of me. I do audition every once and a while and it's really frightening. I really admire actors and don't consider myself to be one. I feel like a hobbyist - it's just another one of my hobbies really. Maybe I'll be lucky enough to get a small part here or there, or even just to act in my own videos for fun.

JE: Another of your "hobbies" that's keeping you busy is your own record label, Nelstar. How does working with so many up-and-comers influence your own music?

NF: I live in a great music town - Toronto - and there's so much talent there it's overwhelming and mind-boggling. Every time I feel like moving, I realize I can't be away from all the growth and talent, new ideas and inspiration that surround you here. I love being around that fresh new talent and new blood. Dylan Murray, the artist opening for me here at Ravinia, is really interesting. He's sort of in the vein of singer-songwriters like Dave Matthews or Jack Johnson with a little Bob Marley thrown in. I think people will enjoy him.

JE: You mentioned earlier that your many different fan bases respond in varying ways to your music. What do you think it is that your large gay and lesbian fan base is especially drawn to?

NF: My gay and lesbian fans have been with me from the beginning - it's been apparent to me from the start. I think they might connect to the individualism and free-spirtedness that's in the songs, but I don't really know. A lot of my gay fans really like my early radio stuff, which I think are a lot about being true to yourself and not listening to what other people have to say about the choices in your life. Honestly, I'm not quite sure, but whatever it is, it's great!

JE: I know my personal mantra song that I loved putting on my iPod was "Maneater." What is it like for you when you hear your songs when you're out and about? Is that strange for you?

NF: I'm trying to remember! Maybe in an airport toilet? - Kidding... Grocery shopping is definitely the quencher. Karaoke is fun. Or driving, too, when you hear someone in the car next to you listening to your songs. I went on a trip to New York for my 30th birthday once and when we were shopping in SoHo and Greenwich, my throwback songs - from Woah, Nelly! - kept coming on within two minutes of walking into any store. I'm not sure if someone just saw me and pressed play but it was the weirdest thing.

JE: Ten years have passed since Woah, Nelly was released. Is it crazy to you to step back and look at all you've achieved in that time?

NF: It is kind of wild. In October, I'm receiving a star on Canada's Walk of Fame and you basically need to have a career for at least 10 years to be considered to that. My knee-jerk reaction to that was that I felt really old, because I've always pictured myself, at the age of 32 now, moving onto another art form of some sort by now. I'll always love music and will always make music, because it's a really great form of expression. We're so lucky as human beings to be able to express ourselves and share like that. But I think I can see myself moving onto other mediums within this decade. I can't premeditate what those mediums will be, so we'll just see what happens.

JE: One final question for you. Is there anything about yourself that is often misconceived or misunderstood?

NF: A lot of people think I speak Hindi, actually. I wish that I could, but then I'd feel like such a poseur. It's kind of funny when your biography is put out there and it becomes this mythology as people adapt it and make mistakes. Another one is that I can play 10 instruments. I have played two or maybe three instruments in my life, and it's funny to me that these mythologies can become facts in a way. It makes me wonder about some of the people I love - like Madonna. I'm sure her story has become so convoluted by now that I don't really know her story. I wonder what my legend or myth will be written 100 years from now. Will people still think I can play 10 instruments? It gets you thinking!