RuPaul’s Drag Race is one of my favorite shows. 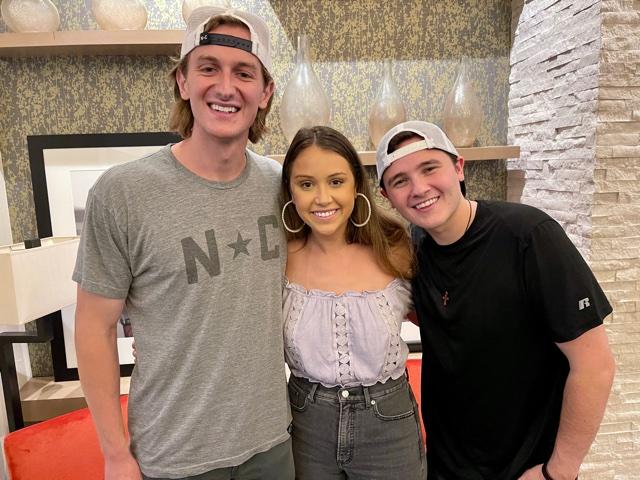 Waterloo, Illinois native Alexandra Kay started writing songs at an early age before auditioning for American Idol in 2011. Her fan base on social media quickly grew as she appeared on NBC’s The Voice and Netflix’s Westside.

She’s packing up some new songs and hitting the road with her In Real Life Tour this summer. Her talented friends, Cooper Alan and Thomas Mac are coming along for the ride. The trio sat down to talk about their projects before their Chop Shop concert in Chicago on July 13.

JN: (Jerry Nunn) So you are from Waterloo, Alexandra?

AK: (Alexandra Kay) I am and currently living in Nashville. I have a place back in Illinois where my fiancé spends most of his time. I travel back and forth quite often, so I can spend some time with him.

JN: I am from Nashville. How is it now?

AK: It is crazy. It’s like the pandemic is over and live music is back! There are lots of people. I don’t know about you guys, but I stay away from the Broadway area.

CA: I love Broadway. When you have friends in town, you have to show them around there.

JN: It’s like Nashvegas with all the bachelorette parties there.

AK: It is similar to Vegas in the way that you only need three days there. By the fourth day, you are hung over, need sleep and a lot of water.

CA: Outside of that, it’s a cool city.

JN: What are the challenges of being played on the radio there?

AK: It is very hard, especially since we are all independent artists. That is why we are doing this tour. We are doing everything on our terms. We are scratching and clawing, like everybody else. We hope radio is in our future, but right now we are playing to fans, which is why we are out on the road.

JN: Why is it called In Real Life Tour?

AK: Because we are all on TikTok. During the pandemic, we all saw a spike in our social media. We were able to connect with our fans on TikTok and Instagram. We posted videos of us singing and collaborating. Cooper’s thing is mashups!

CA: It was a really useless talent before TikTok, but I can throw a lot of songs together in 60 seconds.

JN: How do you decide what works?

CA: It all flows together. It is a surprise that Red Hot Chili Peppers can mix with George Strait and OutKast.

JN: We have had time indoors to put it all together.

AK: Yes. Thomas’ thing is parody stuff and he writes comedy music. He’s on all the time! He popped up on Tiktok doing satire.

I did a coffee segment where I sang a song every morning. Our social media shot up and we started releasing new music. This is an opportunity for people to see us In Real Life.

CA: We have been doing this for a long time, individually, but this time people can see us all together for the first time. People have been buying tickets to watch us play. It’s really cool!

JN: How did you three meet?

AK: Thomas Mac and I had the same booking agent. I went out to 28 cities on the Dive Bar Dreamer Tour and that is how we met and became friends. I rode his coattails on TikTok for a while!

CA: Some of us made The 615 House for TikTok and that is how Thomas and I met. He introduced me to Alexandra and we really clicked.

JN: I see the chemistry. As you rise to fame, I’m sure it’s good to find people you trust.

AK: We all connected, so it is nice to talk about the highs and lows, because they are going through it too. Your life is like a rollercoaster as an independent artist, so to find common ground with someone really helps.

JN: I was watching Westside and remembered I had interviewed your cast mate on the show Pia Toscano in the past.

AK: She is the sweetest, just as beautiful on the inside as the outside. She is one of the best vocalists of our generation. She’s like Celine Dion all over again.

AK: That is what we all had in common. She was on American Idol and had a record deal. That didn’t work out. I had a Facebook following at the time, had some viral videos and was assigned to a record deal. I lost that deal.

We had all seen a level of fame, but didn’t have it. It was real and raw. They didn’t edit anything out! [laughs]

I was the only country artist. Taz Zavala performed Latin music, Pia was pop, James Byous was rock and Leo Gallo was R&B. Everyone was from different worlds and we all became a family.

JN: How do you feel about reality shows and all the personal things they reveal?

AK: I knew what I was signing up for. I had been on television before and knew there was a chance they could twist my words or edit a certain way.

On Westside, people don’t see me in the beginning because I was genuinely happy to be there and there was no drama. I was moved out to LA for a show on Netflix, so I was on cloud nine the entire time. It was stressful, but you learn to be mic’ed up.

Everyone knows there are things you should and shouldn’t say. A lot of people don’t know this, but when I wanted to say something privately I would unplug my microphone. Within seconds, a production person came running to tell me to plug it back in. They could see the light when our mic was unplugged. They want to get it all.

JN: Even in the bathroom?

AK: Yes, we had to keep them plugged in when we used the bathroom. Don’t get me wrong, we worked with an incredible crew and I learned a lot.

JN: Westside addressed being homesick. Do you all get homesick on the road?

TM: I miss my nephew, nieces, brothers and sisters.

CA: It is tough not being at home, but my family is very supportive of what I do.

JN: Alexandra, you are about to be married. How do you plan a wedding away from home?

AK: As you saw on Westside, I lived in LA the first five months without him. We have done long distance a lot. He came out to a couple of the shows.

The wedding planning has been stressful, but my friends and family have helped me.

JN: What is one thing you have to have at your wedding?

AK: Besides Miller Lite? My friends and family is all I really need.

AK: I have a new single called “How Do We Go.” It is a heartbreaking song about handling a relationship when people are drifting apart.

My next single will be out in September. It is a drinking song called “Tallboys.”

CA: People have been liking it at the shows.

AK: It has been fun to play live. I can’t wait to release a party song after so many sad songs.

CA: I had a song come out two weeks ago of “Colt 45” by Afroman that came out 20 years ago. I released as a joke and it’s done pretty well.

AK: It has had over two million streams.

TM: I have an EP that just dropped called One Week and a Beach.

JN: You started with musicals, Alexandra?

JN: What is your favorite one?

AK: Hairspray. I also love Rent and The Color Purple.

CA: Momma Mia is the greatest musical of all time.

TM: Me and Coop can sing you the whole soundtrack.

JN: I should have brought some drag and you could have done the whole thing!

AK: RuPaul’s Drag Race is one of my favorite shows.

JN: Are you watching RuPaul’s Drag Race All Stars?

AK: No. I got into it late. I wanted something campy after watching Project Runway. I turned on season one of RuPaul and watched it all the way through. I became obsessed.

JN: Who is your favorite?

JN: Jinkx sings live songs from musicals like Hedwig and the Angry Inch, which brings us back to musicals, perfect!