Pump up the “Volume 1”: an interview with Mitch Grassi of Pentatonix 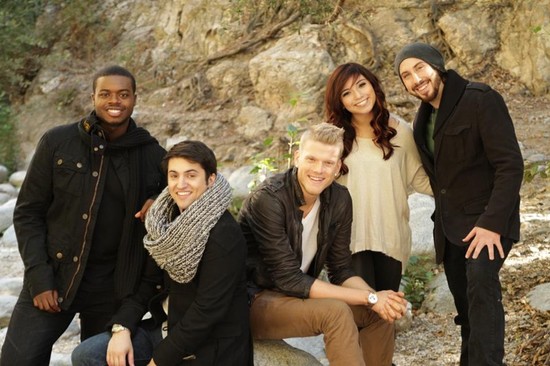 Mitch Grassi is the openly gay member of Pentatonix, an a cappella group that came to fame via its appearance on the NBC series "The Sing Off." Pentatonix, who released Volume 1 (Madison Gate), a six-song EP in 2012, including their cover of Gotye's "Somebody That I Used To Know," are back on the road on a multi-city US tour. (Pentatonix performs at the Riviera Theater in Uptown on March 2.)

GS: (Gregg Shapiro) Mitch, please say something about how your musical background led you to Pentatonix.

MG: (Mitch Grassi) Sure! Pentatonix started out as a trio with Kirstie (Maldonado), Scott (Hoying) and me, because we had been in choir for most of our high school careers. [Laughs] I guess that was a big influence. More than that, especially now, currently with the music we are doing, we all have different musical influences I would say that mine is a little bit more electronic. Scott's is a little more R&B. It's kind of a melting pot of different genres.

GS: A pentatone is defined as "a gapped scale with five notes; usually the fourth and seventh notes of the diatonic scale are omitted." Please say something about the choice of Pentatonix as the name of the group.

MG: The pentatonic scale is a scale that's very popular in R&B, soul and pop music. We use a lot of it in general and when we are writing music. It's a five note scale and we have five members, so we thought it was pretty appropriate.

GS: Do members of the group have assigned tasks? For example, are harmony or rhythm parts assigned to specific people or are the duties evenly distributed?

MG: That's an interesting question. I would say that Kevin (Olusola) and Avi (Kaplan) are the rhythm section and the rest of us are the vocalists. Sometimes we'll switch positions. I actually really do like doing rhythms, but it rarely happens because I can't get those low ends that Avi can usually get.

GS: Four of the six songs on the Volume 1 EP are covers. What is involved in the group's song selection process?

MG: We'll discuss our favorite songs of the time or songs that we always really wanted to do as a group. It was a bit difficult at first, because we had so many possibilities and options. In the end, I think we chose the right ones. It was just a matter of, can we arrange these songs for the group, will it sound good, are we going to have a good lead vocalist? There are a bunch of factors, basically.

GS: What was involved in the songwriting process of the two originals, "Show You How to Love" and "The Baddest Girl"?

MG: That was quite a process in itself, because we had never done that before. We knocked out the covers for the EP first and then we were like, "now what do we do?" (When it came to writing the songs) I think it was melody first. We had a friend named Ben Bram help us out with the arranging process. It was difficult. It was trial and error.

MG: We're hoping next spring at the latest.

GS: Is that also going to be in EP or will it be a full-length disc?

MG: We're still in the deciding process [laughs]. It would make sense if it was a second EP, but I think were ready to pop out an album.

GS: What are the advantages and disadvantages of being the gay member of Pentatonix?

MG: There are actually more advantages than disadvantages. I think it's a great thing. I love that our fans are so accepting of it. It's amazing; it makes me feel so close to them. Some people might say that being openly gay in the music business might deter you from having a career, but I don't think that's true. My career, as a queer person, has been pretty successful. We're still on our way up, but I think we've been doing an amazing job. I love the support. I'm proud.

GS: Pentatonix are embarking on a US tour. What can people expect from a Pentatonix show?

MG: If they've seen any of our earlier shows, they can expect more of a "show." We're putting together some different things, some treats hidden in there. We're going to change things up a little bit and make it more interesting. It's going to be a real show.