Best Friends Make The Climb Together

We talked about me learning how to strip dance. 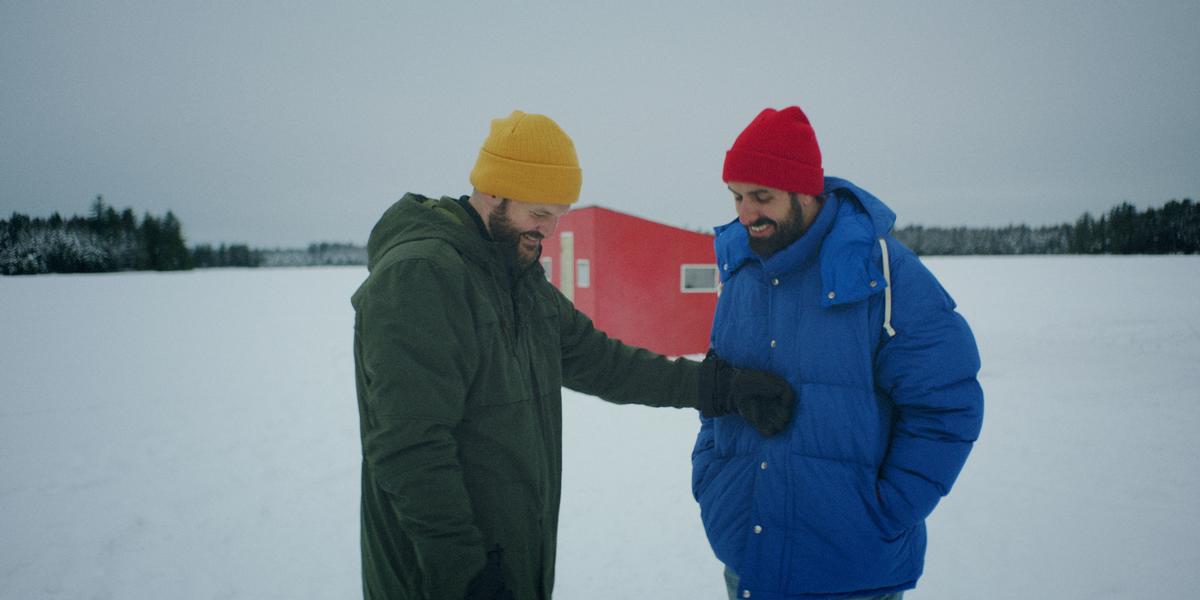 Michael Covino and Kyle Marvin talk about new movie together

Real life best friends Michael Covino and Kyle Marvin have made a movie together called The Climb. It’s an expanded project after the short did well at Sundance previously.

The storyline covers a relationship between two buddies over the course of many years.

Covino directs, produces and stars in the film and Marvin cowrote the screenplay with him along with also starring in the film.

The two stars visited Chicago in 2019 to discuss their movie together:

JN: (Jerry Nunn) You have known each for a while before this project?

KM: (Kyle Marvin) We have been friends for 10 years. We have worked together that entire time.  We did commercial production then started producing features.

JN: What led you to this film?

MC: (Michael Covin) We made a short and took it Sundance. The short is more or less the opening of the film. Leading up to the festival, we realized that there might be something with the characters and the world we created. We explored it more and really fleshed out the story. We got excited about it and found a partner to finance it. We filmed it the following year.

JN: Is that what led you to make the movie in segments?

MC: The elliptical style with the vignettes?

MC: That was a product of how we wanted to tell the story. We knew that we didn’t want to approach expanding the short into a feature in too traditional of a sense. We just stumbled upon this idea that felt right. It was living with these characters for brief moments, then jumping forward in time. We let the audience keep up in that way.

JN: Was there much improvisation?

KM: Well, there was in the fact that we wrote the movie and were also in it. While we were writing it, we put the scenes out like an acting class. We would experiment with the delivery and what we were saying. In that sense there was improv in the script, but as soon as we went into production, because of the technical nature of the filmmaking, everyone basically had to be right on script. Lines were cues for the lights and the cameras, so as we got more into production it became a more fixed script.

JN: Tell our readers about the plot and characters that you play.

MC: I play Mike. The movie opens with Kyle and I biking up a hill in Southern France. Kyle’s about to get married and he’s a bit out of shape. I reveal to him that I slept with his fiance. Kyle gets mad and starts chasing me. He can’t catch me because he’s out of shape. That sets up the dynamic that we follow over the next 10 or 12 years of their life. We watch these two characters try to overcome similar obstacles. The dynamics of the relationships stay more or less the same.

KM: My character is Kyle. He is someone who is very forgiving and understanding of other people. His best friend from childhood is Mike. He is troubled and has his own peculiarities. He loves him dearly and wants the best for him. Kyle is challenged at all times by Mike.

JN: Was this movie a chance to get some anger issues out?

KM: Both anger and pain.

JN: How was making the time lapses with beards and weight loss?

KM: We wanted to show as much as possible as far as time and the physical nature of the characters. My character was chubbier when the movie starts and loses weight as the story progresses. Mike is the opposite of that.

We put those demands on ourselves, in addition to the other things we were doing with the movie. We shaved our hair and trimmed our beards. We gained and lost weight. I gained 15 pounds before we started and lost 30 when we were filming. Mike did about the same the other direction. He gained while I was losing.

JN: How did you gain weight?

MC: I would eat peanut butter and jelly sandwiches.

MC: I don’t know. I was just trying to shove calories into my mouth at all times.

KM: We had a peanut butter and jelly personal assistant that would make sandwiches all the time. He would bring them in the middle of takes and make Mike eat them.

JN: I ate peanuts butter and jelly sandwiches when I ran the marathon.

JN: Was the Thanksgiving scene complicated to shoot?

MC: There were a lot of moving parts. It was a tough scene as far as being an ensemble. Everything was timed and choreographed in a specific way. When one person said something then the camera would have move to a certain place. It was a lot to work out technically.

We cast some amazing actors, so that made our jobs much easier. They hit their marks and said their lines.

JN: How was George Wendt?

JN: He’s quiet, but a very nice guy when I’ve been around him.

KM: Totally. His comedy was foundational, even from my comedy as a child. Watching Cheers and seeing how those characters fed off of each other’s lines was important to me. Having a person on set doing what he does best meant a lot to me.

JN: How was making a dance sequence in your underwear, Kyle?

KM: It was funny when we did that scene, it was a song that we both felt was the perfect one to strip to. We talked about me learning how to strip dance. We decided not to because the character wouldn’t. It was all off the cuff. It turned out wilder as the scene progressed.

JN: Did you wear the sock to cover up?

MC: It was all Kyle!

JN: What is your favorite holiday movie of all time?

KM: Mine are both weirdly the same…

JN: Is this your Planes, Trains & Automobiles?

MC: No, we will make a Planes, Trains & Automobiles, but this isn’t that movie at all.

JN: What would episode 10 be like if the segments continued in The Climb?

MC: We are going to make a sequel so you will find out eventually.

KM: We can’t give that away. You might have to wait awhile for that, but it will come.

JN: What would you like audiences to take away from The Climb?

KM: It’s a tricky thing to inject what we want people to take away. We tried to put out what was an interesting way to look at relationships, not just between men, but everyone. We explored it in a way that was funny with a real edge to it. Whatever people take away from that is great.

MC: It’s life. We have been to enough festivals where we have seen what people think. Cannes was my favorite film festival.

KM: We premiered the film there and that was definitely insane!