The Motels stay for a night in Chicago

The Motels only stay in hotels! 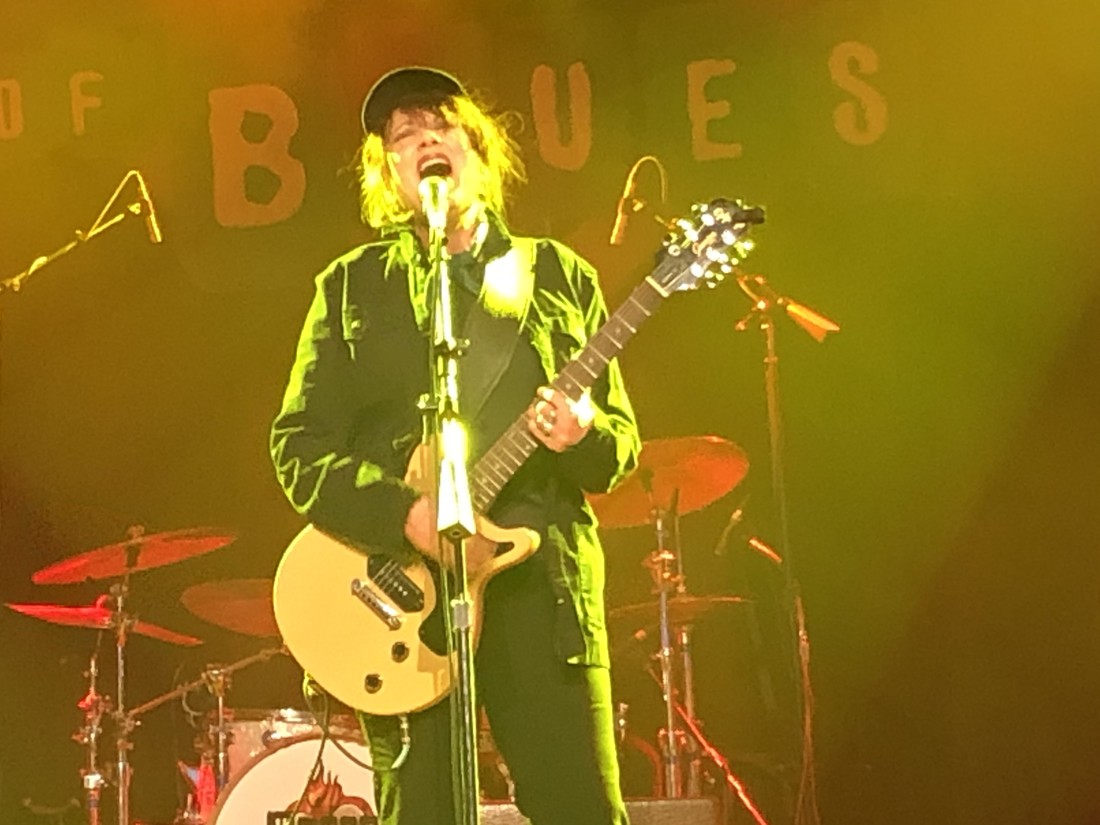 Backstage interview with The Motels

The Motels conquered the charts over the years with massive singles like “Only the Lonely” and “Suddenly Last Summer.” The lead singer Martha Davis not only brought a unique sound to the table, but a timeless voice that has sustained the group over the years in various incarnations.

Currently, The Motels have resurged in media after being featured on television shows such as American Horror Story: 1984 and Mr. Robot season four.

The present lineup is out on tour and Davis talked backstage at the House of Blues in Chicago about the group’s recent endeavors.

MD: (Martha Davis) Thank you! I have no clue what goes on with my voice.

JN: You don’t take care of it like drinking tea?

MD: No, I don’t warm up or anything. I quit smoking a few years ago. That was good and maybe a step in the right direction!

Possibly it’s my Welsh ancestors. The Welsh love to sing and so do I. I have no idea. I was never about being a singer. It’s great to be able to do, but it’s about writing for me. That’s my favorite thing.

JN: You didn’t want to be a singer growing up?

MD: No, but I do remember thinking that if Bob Dylan can sing his songs, then I can. The first time I heard him sing I thought it was a cat caught in a fence. It was not a voice that is pleasant to hear.

JN: You are from California. Are you still there?

JN: Are you an animal lover?

MD: Yes. I have a rescue duck named Wendell. Some of the alpacas I got from someone that moved.

MD: No. The girls are pretty good. I have three goats, four dogs and eight cats. I have many acres of land, so I have room.

JN: Your birthday is three days after mine.

MD: Oh, you are a Capricorn. I am right on the cusp.

JN: Did you ever think you would be touring this long?

MD: I don’t really think about it. It never occurred to me that I wouldn’t be. I stay excited because I love the next project, which we have already started the new album. It’s going to be awesome. I have totally envisioned it. It will be a two album set. It’s called Escape from Planet Earth. The first record is all songs and the second is all instrumental.

I have my own record company now, so I can do whatever I want. It’s called Remarkable Records and we have our first release that just came out.

JN: I thought you were releasing a jazz album.

MD: I’m trying to get that out this year, too. It is being mastered right now. I just have to get the artwork together. My idea for the artwork I am so happy about. I’m a big pun girl. The album is called I Have My Standards. The songs sound like standards, but are not. No one has heard the songs before, so they can’t be standards.

I wanted the cover art to be me holding two Standard Poodles on leashes. The problem is you can’t find poodles with that haircut anymore. I don’t know what I will do. I just want to get it out. It’s been 11 years now. It has some beautiful material on it.

There’s also a lot of product that needs to be released out on vinyl. I’m so happy that vinyl is back!

JN: Marty Jourard is from the original Motels?

MD: Not at the begninng, but he was in the original band that was signed to Capital. He was with us until 1986, then he came back in 2011. I have been with these other band member since 2003. Twice as long as the original Motels.

When have you met a band that has been together this long?

JN: Never. You just found a good batch of people?

MD: These guys are the best. We have so much fun.

JN: Is there something on tour that’s a must have item?

MD: We like to have food and sleep! I don’t lose it if I don’t have it, but Kombucha is a good thing.

We love to have meals together. We had a nice one last night.

JN: Do you have a favorite place to stay?

MD: We don’t stay in motels. The Motels only stay in hotels!

JN: Is there an eighties trend that you miss?

MD: The thing that was exciting about the eighties was MTV was a new thing and it was fabulous. People say they would watch it if it was in the old format of playing videos. Now it is Youtube and people pick and choose. I miss that a little bit.

Another I miss is the synthesizers being available to the general public. It was a new thing. It used to cost thousands of dollars. Because it was new, there was such a rush. You can’t redo that. I miss it, but it won’t come back. We need to invent something else new to take its place.

A lot of things happening in the eighties were due to those two things, MTV videos and electronic instruments. It was exciting.

When I hear bands trying to sound like eighties bands, I laugh, because the whole thing we were looking for was to not sound like anyone else.

JN: How has this eighties tour been?

MD: For a winter tour, it’s been lovely. These bands Bow Wow Wow and When in Rome are wonderful. They are great entertainers and wonderful people. The shows and venues have been great.

We are easy. We like to have fun and do a good job. We don’t demand or need a lot. We are not Taylor Swift, so there are times we can get basically abused. We have talked to the other bands about it and there’s crap that goes on around out there.

JN: Do you meet fans after the shows?

MD: Oh yeah. I am out there at least as long as the show or longer. I usually come home with at least one flu bug. i’m basically a walking Petri dish!

JN: Has one fan stood out to you?

MD: There have been fans that have become my best friends. I have several of those. One of my friends, Theresa, was fans of The Motels when she was 11 years old. She was in love with Marty. She is my best friend now. I met her because she wanted to write my bio.

JN: Have you had bands like Go-Gos that you have worked with and are friends with today?

MD: Most all of the experiences are good ones. If they are not, I don’t want to talk about them.

JN: People always ask me who I interview that are bad.

MD: People are wasting too much time on stuff that’s not good. Don’t give it the energy.

JN: So fans should go to the website for more information on new music?

MD: Yes. When the new record is released that information will be on there. We will sign the records after the shows eventually.

JN: Do you want to tour with more eighties bands like this in the future?

MD: This is fun. In a perfect world, I would like to do less eighties-centric things. This band, for the most part, was never together in the eighties. We are about the new music. I will never tire of playing the old stuff. Those will always be there, but we have a lot of great new material.

We did a show in Punta Cana where we got in trouble for playing the new songs. They told us not to come back with new songs.

JN: Well, it’s hard to balance a set list sometimes. I’ve talked to many bands about this.

MD: I know people want to hear the old stuff and we play songs like “Suddenly Last Summer” and “Take the L.” We also want to play the new music, too!