The Alarm rocks out for a good cause

People are free to be who they are and be with the people they love. 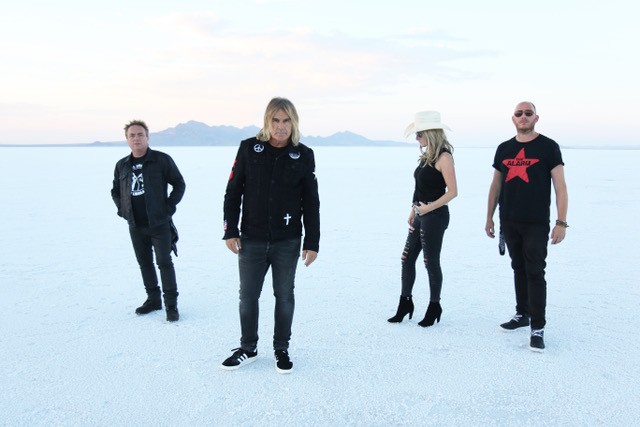 Welsh rock band The Alarm were formed way back in the day and were originally called The Toilets with Mike Peters, who fronted both bands.

They opened for iconic musicians such as U2 and Bob Dylan. The song “Sixty Eight Guns” brought them to the top of the charts and “Rain in the Summertime” continued that trend.

Peters talked backstage on a recent stop while toruing with Modern English and Gene Loves Jezebel in Chicago at the House of Blues.

JN: (Jerry Nunn) I’ve been listening to your music since high school.

JN: You have been in The Alarm since the beginning. What happened to the other band members?

MP: They are all scattered around. We are still good friends. We played in San Francisco just recently with Nigel Twist. He’s a defense investigator there for the district attorney’s office. He came onstage and played a few songs.

Dave Sharp just played on the new album and is in the UK now. Eddie MacDonald, our ol’ bass player, went with us to see Bob Dylan in Hyde Park, London.

The Alarm is one big family. We have our moments like any family does, but the good outweighs the bad. We are a band that might go away, but never leave!

JN: Where are you based out of these days?

MP: I am still in Rhyl, Wales. I have never strayed too far from the tree. My boys go to Welsh language school and speak it.

Wales has afforded me a lot of silence to be creative. When we lived in London, we would rehearse and Motorhead would be next door and we couldn’t hear ourselves think!

For me, Wales is very important to bring up my family there and stay grounded in life.

JN: I just met your son, does he want to be in the music business?

MP: I think he does, but everyone needs a lucky break. We try to give the kids a good education and teach them what music is all about. They see the reality because we bring them out on the road. They help the tour manager and the road crew. I have two sons, Dylan and Evan, 12 and 15. They are here tonight and working hard. Evan has gotten into the Ramones lately.

JN: Did you ever meet the Ramones?

MP: I never met them, but Joey Ramone came to see The Alarm once in the Beacon Theatre in New York. I could see him from the stage because he was so tall. He couldn’t stay until the end of the show.

Joey was diagnosed with the same form of Lymphoma cancer that I was. I survived that and was able to pay my respects to a great man when I played his birthday bash in Harlem Irving Plaza in 2006.

JN: How was touring with U2?

MP: They are such a great band. They took it seriously. They weren’t there to party. When they came offstage they would prepare for the next show. They would look after their band unity and stuck together.

That rubbed off on me particularly. I really admired that they immersed themselves in U2 and their audience. That is what they lived for on the road.

JN: What is it like on the current tour with Modern English and Gene Loves Jezebel?

MP: We go back a long way, so it is really communal. Gene Love Jezebel are from the south of Wales. I met Robbie Grey from Modern English in 1984 when we toured together.

We kept in touch and I always admired how they kept making music. Here we all are and sharing this tour together!

JN: Is your latest song “Brighter Than the Sun?”

MP: It’s off my new album Sigma that has just gone into the UK charts at number one. It’s a great record to play live and is inclusive for everybody. The record Equals just came out a year ago, so it’s quite quick for people, but is built on the same story. Both records have fantastic reviews.

“Brighter Than the Sun” epitomizes what we are trying to get across. People are free to be who they are and be with the people they love. That is what our message is all about.

The Alarm has a tour emcee and he carries the conversations from social media onto the stage. When we turn off the lights at the end of the night, the gig keeps going. It doesn’t stop!

It keeps going online. We feed all the conversations with podcasts and blogs. We really show people what it is like to be in a band.

We can amplify people’s stories on how they have made it through certain challenges. I think we have all lived a lot together as a community. We are still a band, so there’s a lot to contribute to society.

We did Vans Warped Tour in 2017 and got right in the midst of all the young bands. They were very intrigued by our longevity. The Alarm were from a generation where people bought records, so there’s a physical tie to a lot of people. It creates a really strong relationship.

JN: That is good advice for other bands to really work with their social media.

MP: It’s a lot of work to maintain. We have become like a broadcast network. The old school music industry isn’t there for bands like The Alarm. It’s there for superstar hits and pop radio.

I would rather be in a band with sustainability. Our success is longevity.

JN: How long has it been?

MP: I started the group in 1976. The Alarm biography says we started in 1981, but that was to hide a multitude of sins. We were still learning how to be good. We learned from mistake after mistake. We erased our past and here we are!

JN: The song “Rain in the Summertime” still holds up well today.

MP: A lot of the credit has to go to our producer John Porter. He produced “How Soon Is Now?” by The Smiths. They are quite similar records in a way with that really driving beat. They still sound modern.

To be honest, I didn’t think too much about the song when we made it. John Porter asked if we had anything else and that was the song. He reworked the arrangement. When he played it from a computer in the studio, we were impressed.

JN: Are there any songs you are tired of playing?

MP: No. They are like our family. Once they are recored and released, then they have a life of their own. I think it is our responsibility to stand by our songs. Just like kids, you can’t let go of them!

JN: Is it hard to balance the old songs with the new?

MP: Yes. We have so many records that we can’t fit them all into one night. That would be impossible.

We do an acoustic set before the concert for fans. We will do requests and mix it up. It’s been a cool thing we have done on this tour. People can sign up on the website to come in an hour before the show. It’s a nice intimate time with fans.

MP: When the tour finishes we go to Iceland for a cancer charity called Love Hope Strength Foundation. We have run that since 2007. We have done concerts on mountains like Mount Everest and Mount Kilimanjaro. This helps in parts of the world that don’t have medical access.

People can donate at LoveHopeStrength.org.

We also do bone marrow drives at concerts in America and the UK. We work with bands and sign people up for blood stem cell registry. If people need a transplant for a blood disease they can find a match. We have found over 4,000 life saving partnerships and registered over 250,000 people. We work with Rammstein and Kenny Chesney.

We do music festivals like Lollapalooza and signed up over 1,500 people there this last time. We turned Lollapalooza into a life saving event. We have a booth there and the fans have stepped up. They give a cheek swab and are put on a list.

JN: Does it hurt to donate bone marrow?

MP: Not anymore. It used to, but now it is a blood donation. it might be sore afterwards, but not painful at the time. It’s a longer than usual blood draw. We give people some drugs before the blood draw to release blood into the blood stream from the bone marrow. They take the blood out of the system and siphon out the stem cells and then put the blood back in the other arm. After that, it can be passed on to worth recipients. It’s anonymous and we say “potentially life saving” because we don’t know the outcome.

JN: What amazing work you are you doing.

MP I was awarded a MBE by Prince Charles at the beginning of this year on behalf of the charity. This has been quite a life!