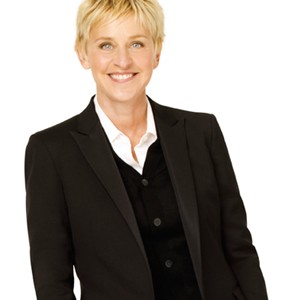 Whether she is hosting her Emmy winning daytime talk show, hosting the Academy Awards or swimming the ocean in Finding Nemo, Ellen DeGeneres has become one of the most beloved celebrities of our time and who has broken barriers for generations to come. Ellen will be at the Chicago Theatre on June 17th to tape her third variety special, Ellen’s Bigger, Longer and Wider Show, as TBS presents A Very Funny Festival Just For Laughs in Chicago, and will air on TBS Saturday, June 27 at 9:00, 8:00 Central. Ellen is one of the most affable people I have ever interviewed and truly appreciate the opportunity and time she has taken out of her busy schedule.

Q: What makes you most excited about coming back to the Chicago to tape your special?

Ellen: Well I love Chicago, and if it – if it weren’t for the weather, I'd live there. It’s a little too cold for me, and that’s the only thing that keeps me from buying something there, because I really do think it’s a gorgeous city and the people are lovely. And so I'm excited to be there just for that reason. And you know I've performed many times in the Chicago theater, so it’s fun to go back to that theater that – I kind of started there, I think my first HBO special, Women of the Night was there. So that’ll be fun.

Q: What can your fans expect to see from your new TBS special?

Ellen: I don’t know until we do it, that’s the fun about doing a live show. I'm doing a magic trick on the streets with David Blaine that I have not been told about, I don’t know what I'm doing with him. I met David at a party that he was doing crazy, crazy card tricks and illusions like in front of my face, and I didn’t know how he was doing it.

So I'm excited about that. I'm also excited about Kanye and comedian Joe Wong, (Rollo-Bollo), which is this balancing act that’s insane to watch. Nick Cannon’s DJing, so the whole show’s going to be great.

Q: Since this is your third variety show, what are your thoughts on the format itself and why do you think some recent celebrities have failed launching their own variety show. And were you nervous ever to go into the variety format?

But this is something I've wanted to do. I mean I grew up watching you know Rowan and Martin’s Comedy Hour, and Carol Burnett, and you know Sonny and Cher, and Donny and Marie. I loved those shows. So it’s just something I've always been drawn to, and it kind of has something for everybody, and now it seems like you know a lot of people are doing it, and you know who’s to say why anything works when one person does it, and same exact format, and it doesn’t work for somebody else?

I really couldn’t tell you, but we’ve been fortunate that whatever we’re doing is working, so I'm very grateful for that, and I just – I have fun doing it, it’s just something different to do than my show every single day.

Q: You mentioned some of the guests who will be appearing on the show. Was there a process that you went through that you would say was different than how you select guests for your talk show?

Ellen: Oh, absolutely. I mean you need a bigger stage for most – I mean not that – Kanye West is great on our show when he – when he’s on, but most of these – well I shouldn’t say that, because Joe Wong is doing stand-up, he can do it on our show. But for the you know the past variety shows we’ve done, we choose bigger acts that do you know like the last one we did, those – the acrobats that were stacking chairs you know about 60 feet in the air, and you just want a bigger stage, and a bigger performance.

So – and you know we’ve looked at – I can’t even tell you, you know, thousands of tapes from all over the world to try to get you know we have this woman, (Layne Cramer), who’s a contortionist, who we had on the show, who is crazy, I mean you know I do yoga every day, but she’s pretty impressive. She’s – she does more than downward dog, I'll tell you that, that’s all I'll tell you about her.

But you know I think that it’s a different kind of – when we did the outdoor show recently for my talk show, we had these – you know these people that were balancing a woman on a beam and throwing her up in the air, because we were outside. So whenever there’s a bigger stage, we just look for bigger acts, and people that are – that weigh more – people that are – that are much heavier.

Q: I grew up in a generation with Ed Sullivan and Flip Wilson, and actually Carol Burnett has become quite a good friend of mine and mentor.

I was just wondering how all those variety shows influence you, with stand-up, and influenced you as a host?

Ellen: Probably tremendously. I mean I didn’t know that, I'm sure at the time, I mean I watched Johnny Carson every single night, and was just in love with him, and had no idea that that would be something I would do later in life. So I'm sure watching you know those shows, it seeped in, and put that bug in me to end up doing this for a living.

That, and my parents’ only vacation, they took us to Warner Brothers Studios, our only vacation as a child, I was – I was on a train going to California to see the set of Gilligan’s Island, I think that tells you where my parents said hey, this would be fun to do for a living, kids.

Q: When you do stand-up, it’s just you up there on the stage, it’s a solo gig. While in the variety show format, you share the stage with a bunch of people. So what are some of the joys of each format for you, and will your stand-up fans still get their Ellen fix from the variety show?

Ellen: Yes you know I keep – I'm asked obviously a lot to do standup again, or go to Vegas, or – and it’s for some reason, it’s something I'm not really ready to go back to, I don’t want to say never, but I did it for so long, and I was so happy to move into another venue, another format, and I love doing the talk show, because I get to come out and do a monologue, and then talk to people, and still get to be funny whenever I feel like it, or serious, if there was no pressure in that.

And the variety show is just you know I get to come out at the same thing, I'll do a monologue, I'll probably do 5, 10 minutes up front of standup, and then I'll you know interact in between each act.

So they will, and someday I may go back to doing another standup gig once in a while, I don’t know. I mean it’s just – I think you have to really – I just – I keep setting the bar higher and higher for myself, and I think I'm more critical of the quality of work and what I do, and I try to pick very carefully what I do so that I can do it as best I can. So – but I think they will get their fix, and I – and I enjoy all the formats, and everything that I get to do.

Q: You finally landed George Clooney on your daytime talk show this year after a campaign for him.

Who is next on “Ellen’s Most Wanted Guest List”?

Ellen: Wow, I think we had been set Julianna Margulies, but I think that’s – I don’t know – I don’t – I don’t know, we keep talking about who’s next. Well the next thing you know we set that – we were – the quest for getting on the cover of “O”, and then that happened.

I really – that happened too fast for me, I really planned on milking that thing for about 3 or 4 years. So now that’s happening, and I got to – I got to come up with – maybe Fish and Game? I don’t know what I'm going to look for to be on the cover of. But I don’t know what the next quest is, but certainly when we start season 7, we’ll let you know.

Q: I know you were a big Adam Lambert fan. I saw the interview he did last week and it was great.

What do you think about the whole Rolling Stone and the 20/20 interviews that are coming up now?

Ellen: I knew early on that he was doing Rolling Stone” and coming out in “Rolling Stone. Well obviously you're talking to somebody who is a big believer in being truthful, just because it’s the healthiest thing that you can do for yourself, and it’s not trying to be anything other than honest. And you know also as a – as a byproduct of that, you’re helping other people that are struggling, and you know we’ve seen recently in the press how many kids have killed themselves because of being bullied at school, and teased. And so whenever there’s somebody that is successful and talented and happy and openly gay, I think that sends a really positive message for all these kids out there that are struggling.

And adults, I mean you know in this business alone, there are so many closeted people still, so I'm proud of him, and I'm you know I'm happy for anyone who has the guts to actually tell the world who they are, and not fear that they’re going to lose their career, or alienate anybody.

Q: Are you planning any of your signature dance moves in the variety show?

Ellen: I think I'll probably dance, I think – you know I don’t know what would happen to me if I broke a hip, I think the show would be over, I don’t know if I ever will stop dancing, because I can't, it’s – even if I didn’t want to dance anymore, I have to dance. So it’s just funny the places that people will – I mean I literally will be in a doctor’s office, and somebody will say you’re not dancing, like I'm supposed to dance anywhere that I am. So yes, I'm sure I'll dance.

Q: Thank you for all you do for our community; you are one incredible inspiration to us.

Ellen: Well thank you very much and thanks for our interest in it, I appreciate it.

Special Acknowledgment to Alissa Norby and Laura Silverman for making this interview happen.