Flip Out Over G Flip: New artist drops an album this month

My parents call me G and my friends call me Flip. 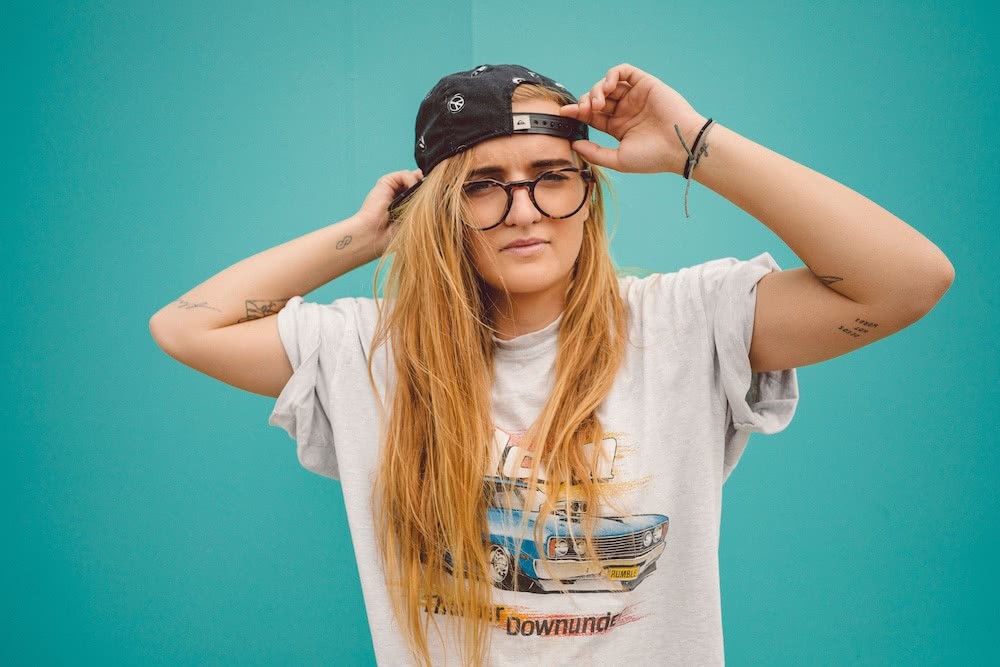 Why should you flip over G Flip? Well, because Georgia Flipo is an outstanding singer and a part of our LGBT  community.

She flew over from Australia to play Lollapalooza recently and promote her new album About Us that debuts on August 30. Her current single is titled “Stupid.”

G sat down to talk about her plans for the future during the iconic music festival while in Chicago.

JN: (Jerry Nunn) Where did the name G Flip come from?

GF: (G Flip) My family was always called Flip our whole lives. I was G Flip, but with my accent it sounds like I’m saying J Flip.

JN: Do your parents call you Georgia?

GF: My parents call me G and my friends call me Flip. It felt natural, because that’s what people call me. It wasn’t hard.

JN: There are so many great artists coming out of Australia.

GF: Australia is on fire at the moment. There’s something in the water, man!

JN: I talked to Rufus Du Sol yesterday from Australia.

GF: I just flew in last night so I missed them. Dean Lewis is also here. There are a few Aussies here. It’s awesome!

I’m friends with Dean, but our sets clash on Sunday. It’s okay. I will get to see him another time.

JN: Talk about your song “Drink Too Much.”

GF: You know when you get dumped and you want to go out and party? Maybe make out with someone and get over it? The song was inspired by that kind of feeling and secretly not being okay.

I wrote it when I was dumped and partying. The lyrics actually talk about how bad I feel trying to get over it.

JN: You were dumped by a girl?

GF: Yes, I got dumped by a girl. She destroyed my heart!

JN: How do identify?

JN: It’s great to have openly queer artists at Lollapalooza like yourself and King Princess.

GF: I went to her concert in Melbourne and the LGBT love there was real.

JN: How is the gay scene in Australia?

GF: It’s pretty cool. I feel like I have working so much the past few years that I really haven’t been amongst it all. I used to go out every Thursday to Thursgay and Friday night is Mother, a gay girl night. I used to get down at those parties.

I’m overseas so much now that I haven’t been there. We had Pride and a big festival in Melbourne to celebrate it all.

JN: You are still based in Australia?

GF: Yes, still in Australia, but I feel like I live out of a suitcase.

JN: The flight is long right?

GF: I came here when I was six years old, because my uncle lives here. I don’t really remember it, but I do remember making a Build-A-Bear. They only have them here and not in Australia. I built a karate teddy bear and I still have it.

JN: You are here for a few days. How do you plan your live show?

GF: I play a lot of drums and sing the majority of the set. I run around, which is awesome. I spent most of my life behind the drum kit. Before I went solo, I was always playing drums in bands. I was a session drummer. It feels great to not have to sit down.

I play bass on a song and use a headset for a mic so I can run around even more!

JN: That must be freeing.

GF: Yes. There’s so much you can do with your body when you have a headset.

JN: That’s why Janet Jackson did it back in the day.

JN: I really liked your voice when I first heard it.

GF: Thats good. What if you had hated it?

JN: Then I would move on to another artist. When did you realize you could first sing?

GF: I think I was always secretly singing as a kid. I would make up my own melody and sing different choruses. I never liked singing in front of other people. The first time I sang in front of people was only for close friends at about age 16. I did backup vocals for bands at that time.

It was never confidently. It was only a year ago that I got confident.

JN: What are the challenges of your music being played over here?

GF: In Australia, I get a lot of support from the local radio stations, especially one of the biggest stations called Triple J. They play me a lot, which is so lovely of them. Their logo is a drum, so I love them even more.

Over here, I’m still fresh. I released my first song just over a year ago. Hopefully, I can get my music heard in the US. It’s way bigger. The music scene in Australia is relatively quite small. Here it’s ginormous, but so far people have messaged me that they like my stuff.

I don’t know who will be in the audience here at Lolla, because I feel like no one really knows me. I hopefully will gain new fans.

JN: I will be there.

GF: As long as I have you there then that’s all I need.

JN: [laughs] You are playing The Bottom Lounge tonight?

GF: Yes. My uncle is coming so I am so excited. My uncle is the first person to call me G. I was about three or four years old. The whole family called me G after that.

JN: Do you go back to Australia after Lolla?

GF: I’m going back to New York for a couple of days, then I stay in LA to write more songs. I’m excited because it’s hot here and I can wear shorts and a t-shirt. It’s the reverse in Australia right now. It’s winter. I don’t like cold weather.

JN: You came at a great time. What’s your plan for the rest of the year?

GF: I’m releasing an album at the end of this month. My album drops August 30, boom!

GF: About Us, because it’s about me and my girlfriend. We have been off and on for about five years. I wrote all of these songs in a year and that year was such a rollercoaster. I actually put the songs in track order of how the rollercoaster went. You can see how we ended up if you listen from top to bottom.

GF: It follows the story of our relationship.

GF: It’s very personal, a diary of the relationship.

JN: This seems very brave of you.

GF: I feel I talk so much and just tell everyone everything. I don’t really have any secrets. To me, it was chill and I had to ask my girlfriend if I could release these songs. She was cool with it.

JN: How did you meet her?

GF: We met in Singapore when I was playing drums in a band. She was working as a singer and dancer at Universal Studio Singapore. We live five minutes away from each other, but we met in Singapore. We never ran into each other even though we had similar friends and went to the same parties. She worked at the Macca’s, that’s what we call McDonald’s, where I would go for a cheesieburger. She must have seen me, but we never met until I was walking down the street in Singapore. I messaged her because I was going to Singapore and we had friends in common. I thought we could have a drink together since we were the same age. As soon as I saw her I thought I was in love. This was back in 2015, so a while ago.

We are still going strong. We had our turmoil and some epic fails.

JN: That’s like any relationship. It’s work. Where can people find the new music?

GF: Many of the songs are streaming now so Spotify, Apple and Amazon. The album will be there on August 30. Just stay by the radio until a song comes on!