I’ve never admitted that to anybody! 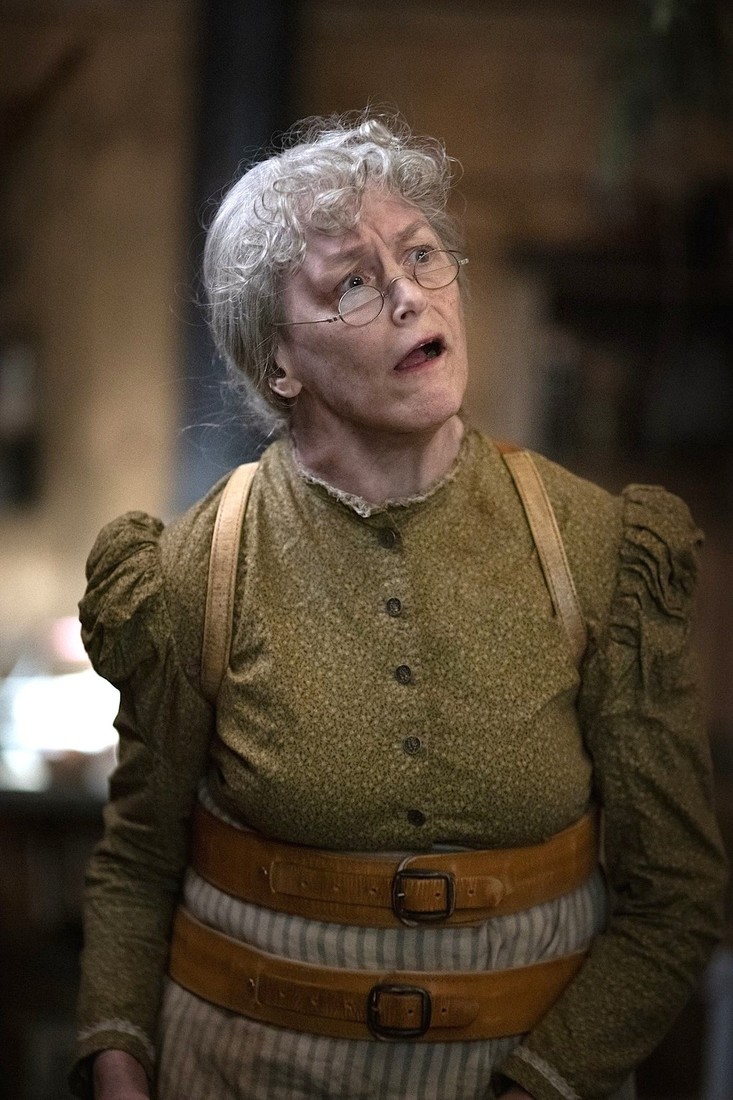 Actress Geri Jewell joked her way into our hearts on the sitcom The Facts of Life as Blair’s cousin Geri Tyler. The part made her the first person with a visible disability to have a recurring role on a prime-time series.

She wrote a biography I’m Walking as Straight as I can describing the experience. It covered her having cerebral palsy and being a lesbian. She has spoken three times at The White House over the years.

Other television roles followed with Glee and Strong Medicine. HBO”s western Deadwood had her playing a character named Jewel Caulfield that was tailor made for her. After the series ended, a movie was made to tie up all the loosed ends.

Jewell talks about her journey on Deadwood in this exclusive interview that took place in California.

JN: (Jerry Nunn) You are originally from New York?

GJ: (Geri Jewell) Yes, Buffalo. My parents left Buffalo when I was 18 months old because UCLA was the most progressive hospital for babies with birth defects. They picked up their whole life and bright me out here to be diagnosed.

JN: You went to school in New York and did stand-up. That led to Facts of Life?

GJ: Pretty much. I was flunking anatomy and physiology in school. I was frustrated and wanted to be a comedic actress like Carol Burnett. I went to school with a blind comic named Alex Valdez, who encouraged me to try stand-up.

I started at The Comedy Store. My first night they thought I was a guy. You can relate to this, Jerry, because we have the same name. It was my first time, so I didn’t even know how to correct him. I made a joke about coming out of the closet with cerebral palsy instead. I got a standing ovation for that routine. I still have a cassette tape from that night. That was October 1978.

Norman Lear saw me perform in 1980. He came up to be me after the show and said, “You are really funny, kid, but you are way before your time.” I said, “Well, wait a couple of months!” He actually waited three months before casting me in The Facts of Life.

JN: They wrote the part for you?

GJ: Yes. The jokes from the first episode were mine from The Comedy Store. I’ve never admitted that to anybody! I should have got paid for that, huh?

JN: Absolutely! Did you keep your t-shirt from The Facts of Life?

GJ: One is in The Hollywood Museum. I have the original t-shirt in storage that I used when I was performing in stand-up. I washed it a million times, so the letters are falling off, but it says “I don’t have cerebral palsey, I’m drunk!” It had food stains on it and they wanted to use it for Facts of Life, so wardrobe bought me a new one. When I saw it I started laughing because I had never spelled cerebral palsy right on the original shirt. I have cerebral palsy and couldn’t even spell it! I put an e between the s and y. I didn’t even know until I got on the series.

JN: Jo had a big lesbian following on the show. Did you ever have a crush on her?

GJ: No, but I did like some of her clothes. I never had a crush on any of those girls. I was roommates with Lisa Whelchel.

JN: I asked Lisa one time if she was surprised when you came out and she said no.

GJ: She knew when I was roommates with her. She wasn’t real comfortable with it, but she knew about it.

JN: How were you cast on Deadwood in the first place?

GJ: I got with the show initially after having spinal cord surgery in 1999 on my neck. I thought my career was over, because I couldn’t move my head. For chronic pain, I get botox injected into my neck every three months. I went to a Santa Monica pharmacy to pick up botox. I was in pain and wore pajama bottoms there. I didn’t want to be recognized, but the man in front of me knew who I was. It was David Milch, who asked me to be on a series. I thought he wanted me to be on NYPD Blue, so told him I would make a real shitty cop!

He explained it was for a new western on HBO. I looked up with my titanium neck and thought,  “God has a quirky sense of humor. I have cerebral palsy, can barely move and now I have to ride a horse!”

He wrote his number on a prescription pad and told me to call him. He was a man of his word and I was the first person cast on Deadwood.

JN: How was reuniting with the Deadwood cast?

GJ: It was a dream come true. It was cancelled abruptly and I hoped for a movie. I was losing my mobility so decided to have surgery but wanted to heal fast in case they made the movie that year. I was still in a wheelchair and in rehab when a script was mailed to me.

I wasn’t ready yet and just bawled. I had looked forward to that. I called and left a message for David telling him my situation and he had my blessing to recast it. He called the next day saying, “There’s only one Jewel and it’s you. I don’t care if I have to hire a driver or make the set wheelchair accessible. I don’t care what it takes, you are going to do it.” I said, “Thank you for believing in me” and I just cried. Both times I met him was right after surgery. It’s almost like he’s an angel in my path.

I look at life like a pilot light. Life can get really tough sometimes and some people let that pilot light go out. They become hopeless and don’t know where to turn. They give up. If you always keep that pilot light lit, there will be people in your life that will make the flame higher. It’s up to you to believe in yourself in the first place. I’ve almost given up several times, but never completely. If I had, then I wouldn’t have opted for that surgery. That’s the irony of it.

JN: Was there complications on set because of the surgery?

GJ: The surgeon wouldn’t let me out of the back brace after the surgery. The wardrobe designer for Deadwood made my dress bigger to wear over the back brace. Props designed an  eighteen-hundreds back brace that they actually wore back then. I wore that over the real brace so I double braced for Deadwood!

JN: Talk about the Carol of the Bells feature film.

GJ: That is coming up in the holiday season. I have a small role with one scene. I play a nun.

GJ: I am working in the scene with RJ Mitte from Breaking Bad. We know each other in real life, so it was cool to finally have something to do together. It wasn’t written to be a nun, but I wanted it to be that way. Joey Travolta said okay. It was on my bucket list to play a nun. I will wear the habit and no one will know that I have cerebral palsy. I don’t know if I pulled it off, but we will see.

They allowed me to name the character Sister Gloria, after my real sister, who passed away two years ago. I lost her to lung cancer. I can pay tribute to her with it.

GJ: Oh, it is. It’s a beautiful script with good people in it like Donna Mills and Lee Purcell.

JN: Many people must have reached out to you about having cerebral palsy. Does one stand out?

GJ: So many people have. You know what’s interesting? I never fully realized the impact I had with Facts of Life until the ‘90s when I started doing the college circuit in stand-up comedy. People came up to me and said Cousin Geri changed their life. Some people admitted to me that they were suicidal for being gay, having a disability or being bullied. When they saw me on Facts of Life it gave them hope.

When I came out of the closet in 2011 with my book I’m Walking as Straight as I Can, I got over 35,000 hits on my website within one week. I was surprised how many people with disabilities that were gay telling me thank you for having a voice for them.

I’m overwhelmed to know I can help people and not even know it.

JN: Is there anything you want to accomplish, but haven’t?

GJ: I am going to add more chapters to my book with new pictures. I love that book, but a lot of life has happened since it was published. Instead of writing a new one, I want to add to this one. That’s what I am working on now.