I feel like a lot of my fans are LGBTQ and most of my friends are in LA. 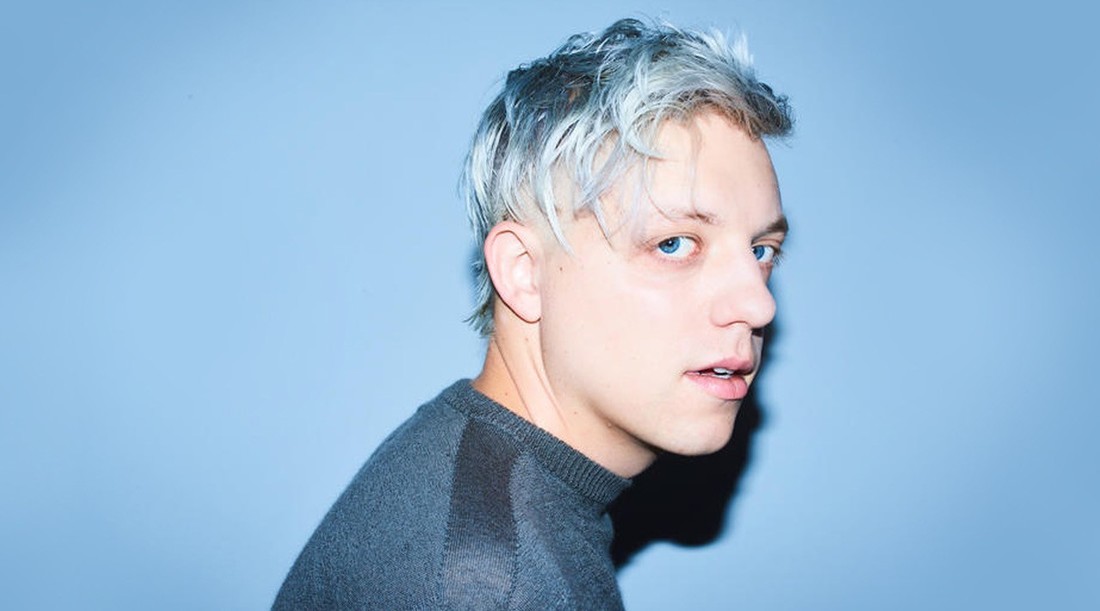 Musician Robert DeLong hails from Bothell, Washington with a huge background in percussion. He combines genres creating a unique that have landed him on the charts with the popular “Long Way Down.”

He talked backstage before a recent Chicago performance at Concord Music Hall.

JN: This is the first day of the tour?

RD: Yes, day one. I have been doing some interviews, then came here for the sound check and we are ready to play the show. It’s been a long day already.

JN: Have you spent much time in Chicago?

RD: I have spent a lot of time in Chicago over the years. I have taken a few days off and have friends here. It’s a great city. There’s nothing better than Chicago in the summer. It’s a little rough right now [laughs]

RD: Yes, this past summer. I did Lolla years ago.

JN: Your dad was a drummer and you started that way?

RD: Right. I still have his 68 Ludwig at my house. That was how I got into music initially was through my dad and listening to music. With him being a drummer it was the natural thing to start with. It was around age 10 that I took lessons and got into it.

JN: Do you think your brain was made to make music through genetics?

RD: I always think about that. I think my brain works well with music, but from an early age I was into computers and programming. I think those two things together lead me here, doing music production and a wild, live electronic performance.

RD: When I play the show, I sing, play guitar, drums, percussion, keys and a lot of weird electronic performance stuff, everything from playing with laser harps to modern joysticks to drum pads.

JN: Do you know any artists that have done anything like you?

RD: Not really. I know some that do things adjacent to it, but I think that’s the cool thing about electronic performance. It allows for so many ways of expressing the music that people have made.

In my mind as a drummer, I wanted to find a visual and interactive way to perform the music I was making albeit electronic.

JN: Is there one instrument you would like to learn to play but haven’t yet?

RD: All of them! I wish I were better at guitar. I think upright bass would be super cool. It’s such a beautiful instrument.

JN: I play the spoons.

JN: Are fans face painting at the show tonight?

RD: We are not doing the face painting. I’m living in a post face world. I’m sorry.

JN: So that is in the past?

RD: Yes, that is the past. I’m moving onto other things.

JN: Is the orange X gone too?

RD: That was a symbol associated with my first record Just Movement. It shows up, don’t worry. It’s floating around. You will see it in the visuals at different points.

JN: The face painting brought the crowds together to bond them?

RD: Yes. We offered it as a free thing for people in the crowd. At one point it became logistically impossible to put it together all of the time. It is up to the fans to do it themselves.

JN: So they can keep going with it?

JN: You aren’t going to kick them out for face painting?

JN: How has “Long Way Down” changed your life?

RD: “Long Way Down” was definitely a big shift. That song got a lot of radio play in America. It has opened a lot of doors to places I have never been, like Buffalo or Kansas City where the song did really well and those are suddenly staple cities. It opened doors for touring especially.

JN: Is there a song you particularly like to play live now.

RD: I am always excited to play newer material. On the last tour I started playing “Beginning of the End,” which is on my EP that I released in October. That one is fun to play because it’s new.

“Favorite Color Is Blue” is always fun to play because it’s a fan favorite at this point. My songs are like my children. I love to play them all!

JN: K.Flay, who sang with you on that song, is such a great person. How was it working with her?

RD: Amazing. She’s great. I loved working on music with her. I feel like we have very distinct and different skill sets. That makes it very easy to work together because we do very different things.

JN: Are you always tinkering with new gadgets?

RD: Yes. I am always tinkering with something in some way. At some point, I have to accept the things I have and tour with them. You can only carry so many cases on the road!

JN: Have you noticed a connection with LGBT fans? I know your opener morgxn will bringing in some of the community.

RD: Yes, absolutely. I feel like a lot of my fans are LGBTQ and most of my friends are in LA. I think anyone who listens to my lyrics would not be an asshole hopefully.

JN: I’m sure it’s a diverse crowd with all of the shows.

RD: Yes. It’s a very interesting demo breakdown. It really depends on area. I will always have a few 50 year olds in the audience and if it’s an all ages show, then some kids.

JN: What is your plan for the rest of the year?

RD: I put out my EP See You In the Future and will follow it up with new music at the end of March. I have a ton of material that I am sifting through right now and finding the right time to put it out there. There are some secret collaborations in the works too.

JN: I always want to know who they are and no one can tell me.

RD: It’s not until it’s signed.

JN: What about morgxn?

RD: I don’t know. We just met a little while ago, but I am sure we will connect on the road and we will see.

JN; What would you want to tell people about you as an artist that don’t know who you are?

RD: My genre is indie, hyper future pop. If you are into something that touches on both popular music and catchy melodies, dance rhythms and smack you in the face electronics with pensive and thoughtful lyrics that’s Robert DeLong.

JN: What does your dad say about your career now?

RD: He loves it. To be fair, he’s an accountant now. His firm manages the business side of my career, which is good, but also a little terrifying. He’s always pushing me to get back on the road and make money!