We haven’t really seen anyone that mirrored us. 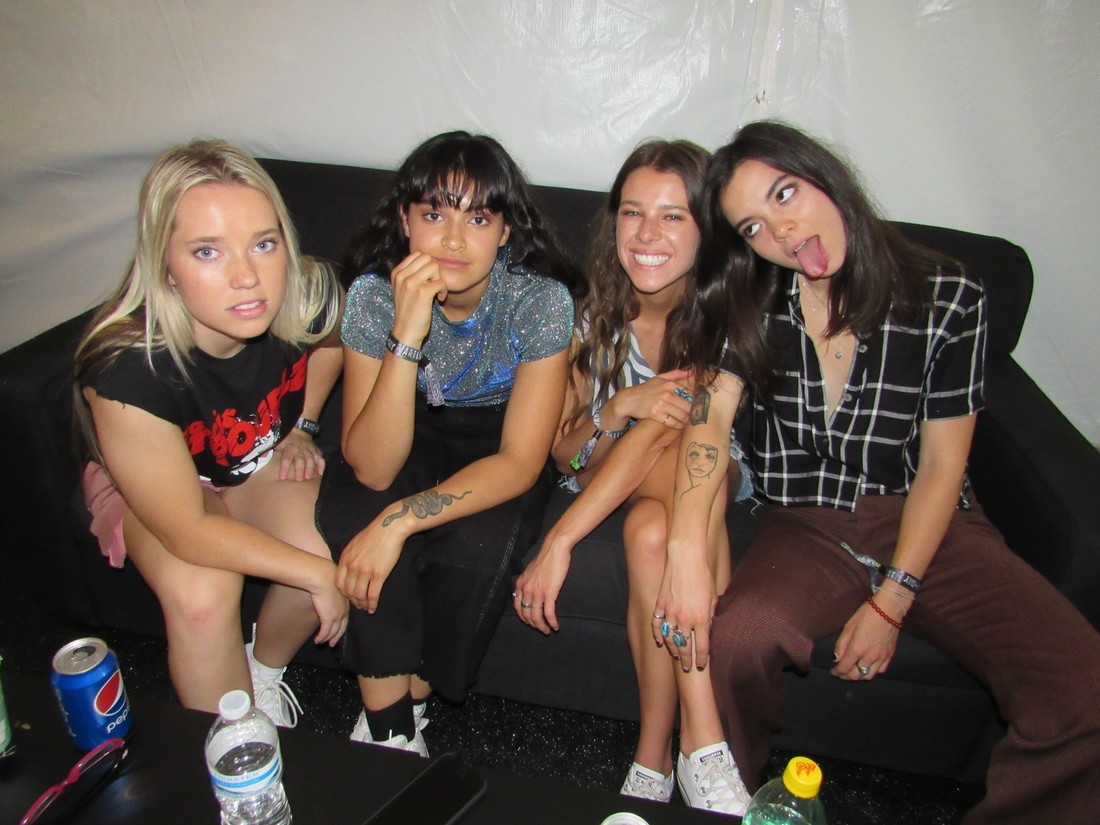 The Aces are an all girl rock band from Provo, Utah. Formerly known as The Blue Aces, the current lineup is composed of guitarist Katie Henderson, bassist McKenna Petty and sisters drummer Alisa Ramirez and singer Cristal Ramirez.

The group met in high school and have made a debut album titled When My Heart Felt Volcanic. This led them to go on tour with 5 Seconds of Summer. They talked about it while in Chicago.

AR: (Alisa Ramirez) It is one of our favorite places to come.

JN: What is so great about Detroit?

AR: It is the energy and the people are really nice.

JN: So everyone is from Utah. Have you heard about the LGBT Love Loud Festival?

JN: Have you ever been?

MP: (McKenna Petty) We have heard about it, but never been.

JN: Is the community in Utah very conservative like people say?

AR: It is conservative where we are from.

JN: So one lesbian member of the band and two sisters. Are you twins?

JN: I saw a joke about that.

MP: There are so many inside jokes.

JN: You met in school?

MP: Crystal and I met in kindergarten. Katie I met in junior high.

JN: I wonder how many people still talk to their kindergarten friends?

AR: I don’t have any friends from high school. The only friends I have from school are these two. We are best friends.

JN: Were you all on the same page about what music you wanted to make?

AR: That was a big journey. When we were kids I don’t think anyone really cared about genre. We were just making music that sounded real garage band like and rocking. We were four kids on instruments. As we got older we took that big journey a couple of years ago. We had to figure out our sound and what kind of music to make.

JN: The concept of the video with the movie Heathers attracted me. Did you watch the movie?

CR: Alisa has directed a lot of our videos. She had this idea for “Volcanic Love” to do movies with relationships. Heathers was one she suggested.

AR: I knew that was one we are doing.

CR: I have watched it multiple times. It was so ahead of its time! They have to do a remake of it.

MP: They are having some problems with that.

KH: It shows a high school.

CR: With a bomb going off…

KH: That is why there’s problems.

MP: They have to be sensitive about that.

JN: Is there a prankster in the group?

AR: They will be waiting for us in an airport line and we will text, “Just woke up.” I am just kidding and trying to freak them out.

CR: Alisa is the prankster in the band. We are going somewhere international and Katie had all this gear. We decided to text them. We live an hour from the airport.

MP: One time in high school, Crystal, you wrote gross boy’s names all over my face in Sharpie when I was sleeping.

CR: I grew up with brothers that were very mischievous. To survive you had to do things like that.

AR: I sued to get their underwear and put garbage on it, like eggs and ketchup. Then I would tape it to their door. When they opened their door it would smack them in the face!

JN: Is there a diva or someone high maintenance?

CR: Mckenna you are!

MP: I will fight for our rights…

CR: If things like your clothes aren’t perfect then you get more anxious.

AR: Yes, if everything is not right and something goes wrong then it is hard to relax.

JN: I can tell you are all really good friends.

KH: We know each other so well.

CR: Everyone has their moments where they are stressed out. It is all very good to know what each other needs in moments of stress. We all need different reactions when we are stressed out. Our personalities are so different. That is how our friendship is and why the band works so well. We are very in tune with each other’s needs in different situations. We are able to cater to that.

JN: Do you feel like you are similar to other girl bands like The Go-Go’s or The Bangles?

CR: We didn’t really grow up in that era. They weren’t relevant when we were kids.

MP: Those bands were for our parents.

CR: They are iconic though.

CR: There weren’t really that many back then.

AR: We are just a little too young for that.

CR: I think that’s the big reason we try so hard. We haven’t really seen anyone that mirrored us.

AR: We were too young to recognize that as an issue. Our motivation were the bands on the Disney Channel or Nickelodeon. They were the boy version and we could be the girl version. We didn’t think how shitty it was that there was no girls. We just saw a hole in the industry that needed to be filled.

JN: Was the idea behind the video for “Last One” to just have fun?

AR: That is the oldest song on the record.

CR: That was written about four years ago. That was one of our first songs. We didn’t even know if we would use it. It didn’t sound like The Aces. It sounded too poppy. The demo of it is not what it is now. We Ace-a-fied it.

There is an underlying tone of sadness in it that we love to play with. It’s a pop song with a heartbreaking part to it. It is a promise to yourself that this is the last one.

JN: What are you doing in the future?