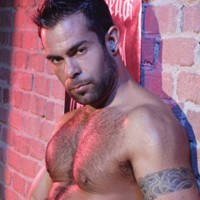 SC: I had a few offers before I was ready. Then last summer, I met Chris Ward, who made me an offer I could not refuse: A starring role in Mirage aside Jake Deckard. I had been a fan of Jake’s, and we filmed my first scene on location in Hawaii. Would you say no? Like a dream come true really … and recently, I signed an exclusive deal with Stallion. So my best work is yet to come.

TC: How many films have you done so far?

SC: Ten. A lot that is coming out this year. Highlights include Lords of the Jungle and Mirage for my company, Raging Stallion. The opening scene H20 for Titan with Francois Sagat. Communion for Hot House and an over the top group scene for Chi Chi’s long-awaited Link V. And I just got back from Europe filming a scene on a catamaran off the coast of Gran Canaria for a movie called Out On Vacation.

TC: What was your first day on the movie set like?

SC: Surreal, amazing! We were in the jungle on the big island of Hawaii. Its was hot, but my scene partner was hotter, Blake Nolan. I was more excited than nervous and really turned on. I realized then I was a performer; it came natural to me.

TC: First time having sex - was it a boy or a girl?

SC: A guy. I have always known what I wanted. I didn’t waste time going after it. I came out when I was 14 and never looked back.

SC: Just my mother and father do. My mom was worried. She was under the misconception that its sex, drugs and rock ’n’ roll. She didn’t realize this is a serious business. And my dad just thinks I’m a stud! [Laughing]

SC: Some were 100 percent supportive, and others expressed concern - “Don’t forget about who you are, you have a day job!” If anything, I guess I make interesting cocktail party conversation and idle gossip. [Laughing]

TC: Is there a difference between Steve Cruz sex and sex at home?

SC: Yes and no. The sex I have in front of the camera is more of a performance, but its still a part of who I am. The performance makes it fun! The sex I have off-camera is hot for different reasons. When it’s good, it’s not a performance. The sex is more about being connected and intimate. That’s what I strive for, a right balance of wild animal intensity and human connection.

TC: What movies do you have coming out soon?

SC: My big movie of the year is out in June, Mirage from Raging Stallion. I play a lead role with Jake Deckard. It’s the follow-up to Arabesque. Its quite an amazing film, with loads and loads (pun intended) of hot desert sex, six hours!

I also have great scenes in Hot House’s Communion and Titan’s H20. Later this year, look for Link V from All Worlds.

SC: I would kill to work with Francesco D’Macho, Damien Crosse and Tyler Riggs. I recently signed an amazing deal with Raging Stallion, so I know these guys are no longer accessible to me professionally - but, hell, a guy can dream! Yeah guys … I’m a huge fan of your, uh, work!

TC: You’re coming to Chicago for the Grabbys this year, so I have to ask for all the men in Chicago, have you ever slept with a fan?

SC: No, but I have a boner for a guy that started my Houston fan club. He’s really hot. The club sent me a circle jerk photo of their equipment. My Houston fans are hung like horses! Randy, if you’re reading this, I’m a big fan of yours. Anytime, any place, buddy! Send me more nasty pics, bro.