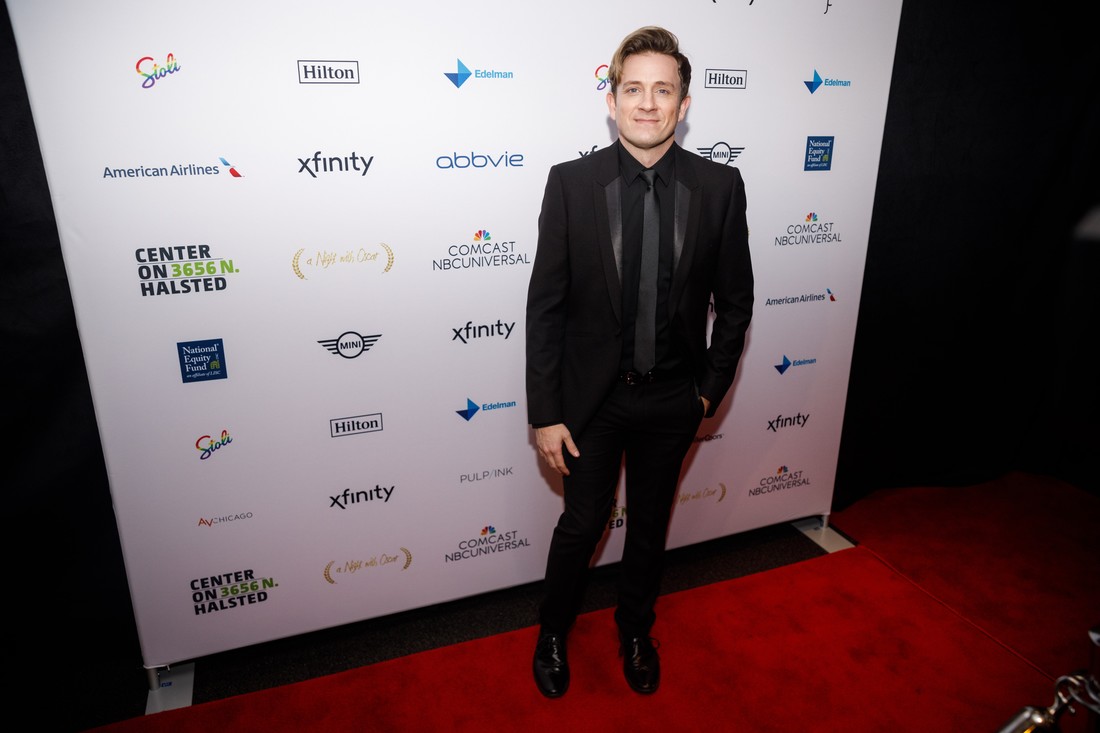 Out actor Tom Lenk will forever be known for playing Andrew Wells on the television series Buffy the Vampire Slayer. He went on to be on the spin-off Angel afterwards and more television followed with NBC’s Joey, House, Six Feet Under, and How I Met Your Mother.

On the big screen he landed parts in the films Date Movie, The Number 23, and Transformers.

Theater credits include Grease and Rock of Ages.

Lenk sat down for a chat at the Xfinity Studio store on a recent trip to the Windy City.

JN: (Jerry Nunn) Did you always want to act while growing up in California?

TL: (Tom Lenk) I was always acting as a kid. I was just far enough from LA that my parents wouldn’t drive me to auditions. I ended up running a children’s theater company. At 16 I was directing Annie. I cast a then unknown Amanda Bynes, who was five at the time.

My high school didn’t have a drama department so I became the drama teacher. I directed Music Man as my first musical.

I went to school at UCLA and began to audition for things. I got on TV doing commercials.

JN: Was it small parts up until Buffy?

TL: Yes. Buffy was the big thing that launched my career. Since then I have done a Broadway musical in New York. creating a role in Rock of Ages. I also did a regional play of Buyer & Cellar in Pittsburg. It was such a passion project for me. Only a few people have seen it though since it was regional.

Of all the things I have worked hard on, Instagram is the thing that has taken off now. I barely have to try and hundreds of thousand of people see it. Work smarter, not harder or less work, and more werk!

JN: When did you officially come out of the closet?

TL: I came out sometime after Buffy. I was out in my life, but had to come out officially in the press to be out. I remember cast members of Buffy being careful about asking me who I was dating. They would ask my type trying to figure out if I was gay or not. I appreciate people were thoughtful about that.

Things are just easier now. Back then I wanted to have access to all types of characters so I could play straight or gay. It was a different time. Thank god it is not like that anymore.

TL: It was. I had to remember who I told and didn’t. I am happy to be part that.

JN: What did you get out of the Buffy experience?

TL: I got amazing friends with the cast and crew. I had a great relationship with Joss Whedon and worked on his other show Angel, then Cabin in the Woods and Shakespeare’s Much Ado About Nothing.

JN: Do you have a favorite movie you have performed in?

TL: I have a new one that has not come out yet, Girls Will Be Girls 2. The original was campy and pre Drag Race. The new one will hopefully be finished this year. I play the new girl in the house. We made it in 2011 so drag has changed. It was super low budget.

I borrowed a wig from Willam Belli from Drag Race. It was real human hair so I had to curl it. I had to pad. I felt what women go through on a daily basis all at once, in a short time.

JN: Talk about the new show Tilda Swinton Answer an Ad on Craigslist.

TL: My friend wrote a play and asked me to read it. By page three I was in! Immediately I  wanted to do it at the Celebration Theatre in LA. After doing it there, we now have a little mini Off Broadway run in a few weeks to see what happens.

I play Tilda Swinton and bleached my hair for the part. It is a hilarious play and also very moving. It’s Our Town meets Christmas Carol meets Mary Poppins. It is about Tilda Swinton flying in to help a gay man and his life. It is weird. I could honestly do it every night for years. I would pay to do it!

Maybe someone in Chicago could bring it to their theater company…

JN: I saw you on the TV showTransparent. How was working with Judith Light?

TL: Talk about one of the very first allies of the gay community. During the AIDS epidemic she was one of the first famous straight people to speak up for our community. As a kid I would watch Who’s the Boss?

When I booked the role I got to go on a cruise to Mexico to film it. I had never been on a cruise before so I put the patch on, which gave me incredibly blurry vision. When they filmed it I wound up playing the piano. I had to learn the song last minute. I couldn’t read my lines or the notes to play the Alanis Morissette song. I got to play the song on a boat with Judith Light so it was amazing.

Everyone should study her on the red carpet. She does full on poses. I have her on my Instagram.

JN: Who is your favorite celebrity to dress up as on Instagram?

TL: I just did Laura Dern for the first time at the Calvin Klein show. I was waiting for the right moment.

I had been waiting to do Diane Keaton so just did her.

JN: Who helps you make the garments?

TL: I make them all.

TL: No, but I am a mean hot glue machine! Basically, I live my life at the Project Runway unconventional materials challenge.

JN: I saw you sell glue sticks on your website so someone can use that for an outfit.

TL: Yes, and there are lapel pins that are all glue themed!