Feast of Fools interview with ChicagoPride.com 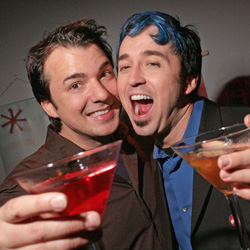 It’s almost like the Public Broadcasting Service (PBS) for the internet savvy sect. “Cash in the mail,” “Feast of Fools” internet radio variety show co-host Marc Felion notes as he sorts listener contributions. To keep the independently produced and award-winning gay-themed podcast in operation, dedicated listeners have been known to send in financial donations. “This guy sends us $10 a month,” adds Felion removing a money order from an envelope with no return address. “I don’t even know who he is.” The listener never officially introduced himself.

Stemming from an eclectically colorful live stage production, featured in venues from the Bailiwick to the Vietnamese Banquet Hall, the ever-evolving Chicago-based theater ensemble transitioned into a wide-spread internet radio phenomenon almost three years ago—and was awarded the People’s Choice Podcasting Award for Best LGBT Podcast in 2006, the first year that category was put in the running. This year, “Feast of Fools” is nominated for two podcasting awards in the LGBT category as well as for People’s Choice for Best Podcast, the Podcasting Awards’ highest commendation. This year marks the first time a gay-themed production was nominated for Best Podcast.

On the show, hosts Felion and “Feast of Fools” founder Fausto Fernós are frequently joined by regular guests Sal E, Amanda Steinstein and the frying pan-wielding Miss Ronnie for roundtable discussions, celebrity interviews, cocktail recipes, and “how to” sessions for drag queens—like how to lip sync and put on makeup. An assortment of the socially taboo, disenfranchised, indie, urban, underground glam and even at times awkward, “Feast of Fools” is an impressive menagerie of progressive thought and gay sensibility all referenced and addressed merely as a matter or course.

JF: (Jason P. Freeman) So why the change from a live show to an internet podcast?

FOF: (Fausto Fernós) I was tired of doing things that were ephemeral. Once you saw it, it died. It only lived in people’s minds, like fireworks. It’s beautiful, but the next day [you probably can’t remember the specific colors or presentations.]

JF: So how does the spirit of the original live show play itself out in the podcast?

FOF: (Fernós) it’s in everything that we do. It’s the content and the people that are in it and it’s the mindset that the podcast has. I think a lot of gay podcasts are the way they are because of the live show that the Feast of Fools was. It’s rare to say that a genre of media is influenced by a theater company, but in this case I would be inclined to say that it is.

JF: And you’re up for two awards this year: Best GLBT Show and People’s Choice for best podcast.

FOF: (Marc Felion) Yeah, we’re up against the “Catholic Insider.”

(Fernós) Which is the Vatican’s “unofficial” podcast.

(Felion) It’s pretty amazing that we’re the only gay podcast in the running.

JF: Why do you feel podcasting has become such popular media?

FOF: (Fernós) Podcasting is just a more intimate form of media. It takes any form of audio or video experience and consumes it onto your iPod or computer … Podcasting is definitely a response to the homogeneity of mainstream media. Although, I would argue that if you compare the audience sizes of the more popular podcasts, they run head-to-head with any radio or television shows. Some of the cable broadcasts have much smaller audiences than some podcasts. It isn’t really factual to consider it an underground or indie medium.

(Felion) It’s like this: Anybody can play baseball, but how many players go the world series?

JF: "Feast of Fools" is an ever-changing, ever-moving production. Where would you like to see the show go in the future?

FOF: (Fernós) To the moon, baby! I’d love to see a bigger audience. We’ll never give up the podcast, but there’s no reason why it can’t be a television program.

JF: Why should listeners vote for Feast of Fools for Podcast of the year?

FOF: (Fernós) Because Brokeback Mountain lost the Oscar for Best Feature, and the gays have to make up for that. We have to avenge Jake Gyllenhaul. Jake Gyllenhaul is at home crying right now—and no one wants to me cry sitting in the audience if [Feast of Fools] loses.

(Felion) And we’re up against the Catholic Church. If you don’t vote for us, the Pope wins.

Voting for the People’s Choice Podcasting Awards close Saturday, August 11. Vote for the “Feast of Fools” everyday at www.podcastawards.com to circumvent the religious right agenda!

“Feast of Fools” is available for subscription off iTunes, or can be downloaded directly form the show’s Web site, www.feastoffools.net.