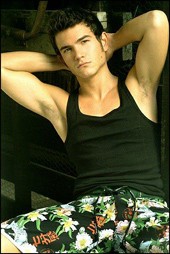 Crystal Lake native Jim Verraros was the first openly gay American Idol contestant and since continues on a path to success as both an actor and singer.

In 2005, Verraros released his first internationally-released album, Rollercoaster, produced and co-written by Los Angeles-based singer/songwriter Gabe Lopez. The album included the Top 25 Billboard Dance Chart hit "You Turn It On."

As an actor, Verraros has found a vehicle in the Eating Out movie franchise. Verraros starred in the hit indie-flick Eating Out, in which he contributed three songs to the soundtrack. He returns to his role as Kyle in Eating Out 2: Sloppy Seconds.

Like its predecessor, Eating Out 2 adds a gay perspectives to the classic American teen sex comedy. Eating Out is the first American gay movie to produce a sequel.

EO2 opens Reeling: The Chicago Gay and Lesbian International Film Festival on November 2nd when Verraros will be joined by EO2 director and Illinois native Phillip Bartell for a special appearance before and after the movie. (Event Details)

CP: (ChicagoPride.com) How do you feel about E02 headlining the Reeling Film Festival in your hometown?

JV: (Jim Verraros) It is exciting. Not to mention, this is a sequel (the first gay sequel ever) so you want it to be better than the first installment. I guess I'm my own worst critic, so I'll sit back and watch it and see all these things I could've done so much better, but then I have to remember to listen to the audience's reactions. And if they're laughing and having a good time, then we've delivered.

CP: What was your most rewarding moments in reprising your role In E02. Did you learn anything new?

JV: If anything, from the first film, I wanted to come prepared and have my lines memorized early, so that I could focus on bettering my performance. I also wanted to let go a little more. I think I was so focused on how I looked or came off in the first film because it was my FIRST FILM EVER! But, this time around I definitely felt so much more at home and I knew Kyle's role better, too. I just had fun with Kyle and his antics.

CP: What are some of the differences in direction style between Philip Bartell in EO2 and Q. Allan Brocka, director of the first installment?

JV: Well, I'm sure they both felt incredibly pressured to deliver something in the short filming time of just ten days on both films. I can't even imagine what kind of stress they were experiencing. Both Phillip and Allan did amazing jobs directing us, and I think they have more in common than differences in direction.

CP: Though Kyle may be more aggressive in skirting after the eye candy in this film, his irksome insecurity hasn't changed. It doesn't seem like Kyle has grown at all.

JV: I think Kyle has grown SO much in this installment. I don't think Kyle would have EVER pursued a character like Troy if he didn't feel like he had a chance. That's what's different this time around. Kyle's definitely still the underdog, but he's starting to gain more confidence.

CP: Any future thoughts for the characters of EO2. You think they'll be a third helping?

JV: A third helping? God, who knows? I guess that would have to depend on the financial success of this sequel.

CP: What about you personally? What have you got on the plate in the coming months?

JV: I'm almost done with my next album, and can currently be seen every Saturday on WGN at 5pm on "American Idol Rewind." And I just launched my brand new website, www.jimverraros.com, so be sure to check that out. As far as any other film projects, who knows. I'd of course love to work more from this film, but nothing substantial just yet. I just hope to continue to do more independant film, and keep cranking out more tunes.