My career in Spanish is my bread and butter right now 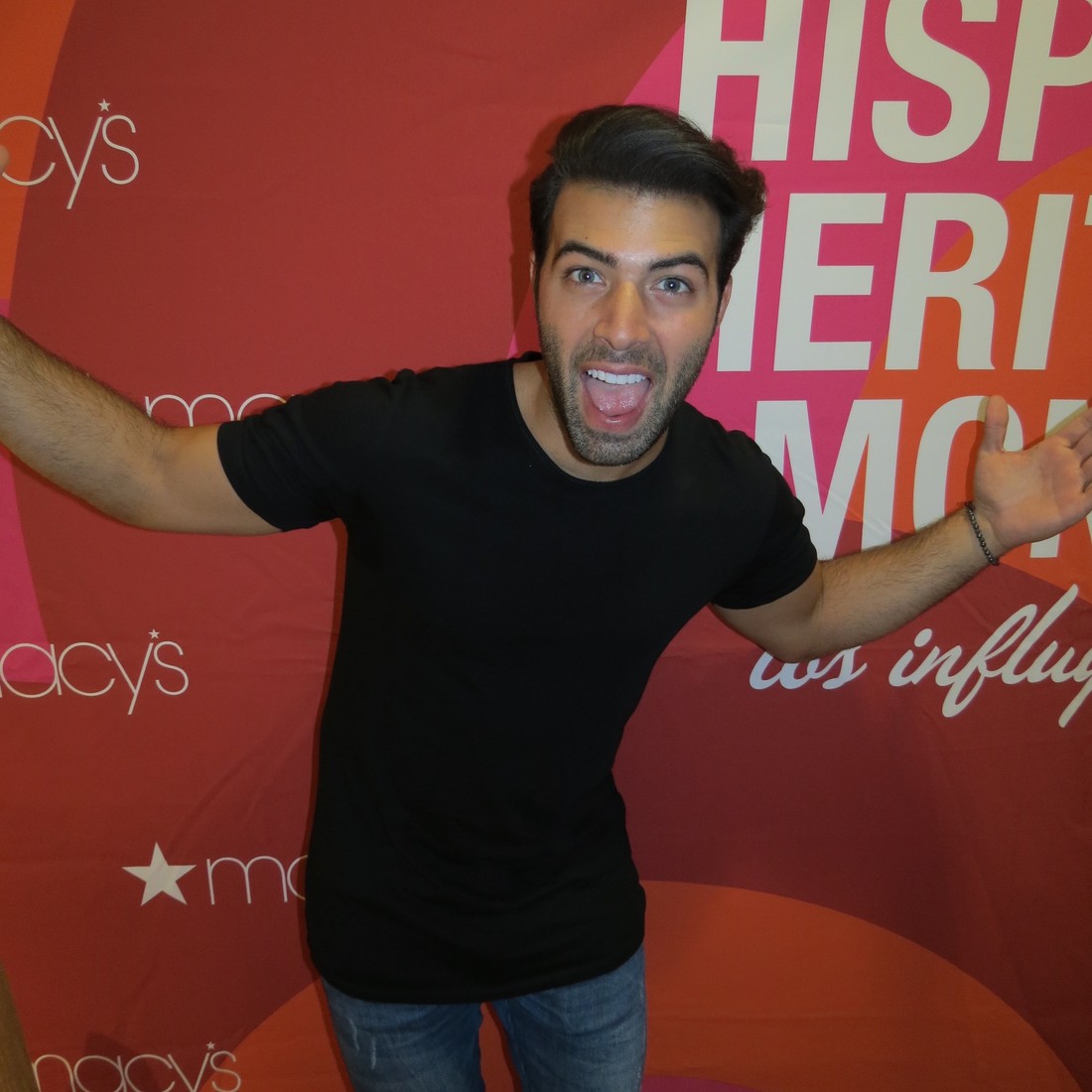 Jencarlos Canela brought the Miami heat to Chicago this past week at Macy’s Hispanic Heritage event.

The Cuban singer started in Latin soap operas. Mas Sabe el Diablo went from TV to a movie it was so popular. He won awards for Pasion Prohiba and put out albums along the way while acting.

Canela portrayed Jesus Christ in the musical The Passion on television and played Xavier on the series Telenovela with Eva Longoria.

He sat down for a quick chat at Macy’s to discuss his new song “Pa Que Me Invitan.”

JN: (Jerry Nunn) Hi, Jencarlos. What do you friends call you?

JC: Yes, it does. I was just talking about that. My friends mess with me all the time and call me Jencarlos Cinnamon.

When my dad became a US citizen he said my last name is Cinnamon now!

JN: Since this is a Hispanic Heritage event, how do you balance old school Cuban ways with current times?

JC: As Cubans our tradition is family values. We are a very tight family. We are unified and a big family. I think that is something that has crossed over into this new generation. I see it in my cousins. They take road trips together all the time. For us, cousins are like brothers. I have carried that along with us. We have held onto that.

One thing is the grudge of my parents and grandparents having to go through so much of the regimen that is still in Cuba today. That is responsible for so many deaths. Families have been torn apart. We have people in jail because they think differently or speak up about what their political views are. It is not allowed in Cuba. Still there is repression and a lack of freedom of speech. I think this new generation wants peace and heal these wounds. I can say right now that I feel their pain but you can never really feel it unless it happens to you. I can’t imagine what they went through.

I am grateful to my parents for taking that leap and risking their lives to come to this country. My dad had to cross those 90 miles in that sea. He made it. Thanks to that we are here in the best country in the world. I love my red, white, and blue, and I love my stars, and stripes. I am a hundred percent American and a hundred percent Latino. That is part of this new generation as well. I am extremely proud of my heritage. That is the reason we are doing this with Macy’s this month.

JN: I spoke to Gloria Estefan about Cuba in the past.

JC: She is one of my heroines. I love her to death. She has been such a huge supporter of my career, along with Emilio. We are great friends.

JN: Did you go see their musical?

JC: I was just at Macy’s in New York doing the event there. I was going to see On Your Feet. I unfortunately had two friends that passed away that same week. I had to leave New York for the burials. I went to Miami then flew back to New York to do two shows, then came here.

JN: How was the experience of The Passion?

JC: Oh my god, it was one of the most amazing experiences of my life. It was so awesome. There are talks about a US tour coming up. We are in the works of that. I loved it.

I love music and it is primarily what I do. When I can do that and acting it is a yes from me.

JN: I watched the video for “Pa Que Me Invitan.” Who was that little old lady in the rainbow swimsuit?

JC: That lady was a trip. She was turned up harder than us! We were partying and drinking, then this lady was going in. She was twerking and grinding like she was 15. It was crazy.

JN: Would you like to do English crossover songs?

JC: Oh yeah. My career in Spanish is my bread and butter right now. I was born and raised in this country though. I actually sang in English before I did in Spanish. My dad was being my manager and spoke primarily in Spanish. That is the world where he was looking for opportunity for me. Thankfully some doors opened when many closed. The rest is history.

We have a partnership with Republic Records and we are working on the English album as we speak.

JN: I liked the guest stars you used. Bob Marley’s son was in one of your songs, correct?

JC: I always try to integrate the English language into my Spanish stuff. It comes natural. Sometimes I will talk and the Spanglish is inevitable for me. I like to bring that into my music.

I love reggae music. The song is called “Bajito.” I invited Ky-Mani Marley to be on the record with me. People thought it wouldn’t work. It just went diamond and is five times platinum. That doesn’t happen anymore. We are grateful for it.

JN: Will there be more on Telenovela?

JC: It was a one season thing. It didn’t get picked up again. It was an amazing experience.

JN: A lot of people may not know Eva Longoria is very political.

JC: She is very political and incredibly smart. We actually had dinner with Senator Tim Kaine who will hopefully be the next vice president of the United States of America. I feel that both candidates are not the most popular or most loved in this country, but one of them is going to be president. I don’t want to focus on one candidate but the team they have assembled around them to lead this country is important. I feel Hilary’s team is way more prepared for the role to be in oval office.

JC: I am touring. I have concert coming up Oct. 27 in Puerto Rico. There is a huge concert coming in New York, and another in Miami. The next tour starts again in February of next year. This single is doing incredibly well. We are crashing parties everywhere. The single is about turning up and partying so we have just been showing up at clubs and even in people’s backyards. At the end of the video is a phone number you can call and leave the date of your party with your information and I might show up.

JN: You can crash my Halloween party!

JC: I would love to.

JN: Do people tell you that you look like a Cuban Jonas Brother?

JC: No, you are the first. You should see my brother. He’s a straight up actor!