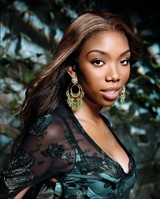 Music superstar, actress and performer Brandy is celebrating her first decade of hit-making with the release of THE BEST OF BRANDY, a first-of-its-kind, 18-track retrospective drawn from the L.A. resident’s four best-selling albums for Atlantic Records. The package includes 16 Top 20 Pop and R&B charted singles, a remix of the 1994 R&B chart-topper “I Wanna Be Down” (featuring Queen Latifah, YoYo and MC Lyte) and a cover of the Phil Collins classic “Another Day In Paradise,” a duet with brother Ray J, previously only available in Europe. In addition to five #1 R&B and two #1 Pop hits, THE BEST OF BRANDY also includes a duet with producer and hitmaker in his own right Kanye West, the 1998 #1 crossover duet with Monica (“The Boy Is Mine”) and production by Mike City, Kenneth ‘Babyface’ Edmonds, David Foster, Rodney Jerkins, Quincy Jones, and Timbaland among others.

Known for her leading role in the top-rated sitcom Moesha, the Mississippi-born entertainer – who is currently developing a TV series with Fox and Touchstone Television – first hit the charts in 1994 with the gold single “I Wanna Be Down,” produced by Keith Crouch. Drawn from her self-titled quadruple-platinum Atlantic debut, that first hit was followed by the million-selling single “Baby,” and Brandy subsequently scored another gold single in 1995 with “Brokenhearted” (featuring Wanya Morris from Boyz II Men), and started 1996 with another million-seller with “Sittin’ Up In My Room,” produced by Babyface and featured on the soundtrack of the blockbuster movie Waiting To Exhale, starring Whitney Houston.

By the time Atlantic Records released Brandy’s 1998’s sophomore album Never Say Never, the singer’s starring role on Moesha (which ended its successful five-year run in 2001) along with key appearances starring in the Disney television adaptation of Cinderella in 1997 and the 1998 movie I Still Know What You Did Last Summer had catapulted Brandy into the upper echelon of young across-the-board entertainers. The key single from the album, “The Boy Is Mine,” a duet with singer Monica, became a double-platinum best-seller and helped propel Never Say Never to over six million sales worldwide. Subsequent hits have included “Have You Ever?” (1999), written by Diane Warren and produced by David Foster; “Full Moon” (2002), written and produced by Mike City; “Who Is She 2 U” (2004), produced by Timbaland; and “Talk About Our Love” (2004), Brandy’s Top 5 Pop and R&B duet with Kanye West.

In the interview for ChicagoPride.com, the singer talks to her gay fans about her musical past, her spiritual present, and her future acting roles.

CP: How does it feel, personally and musically, to be compiling all of these songs on one album?

Brandy: When they told me they wanted to do the BEST OF BRANDY, I was like, “Oh my God, I can’t believe I’m already doing an album like that.”

I didn’t realize how long I’d been in the game. Of course, you know how long in your mind, but you don’t feel it, and you don’t realize it until something like this comes along. I just thought it was a great idea--to put 18 songs together of the best of everything that I’ve done made me feel really good. And also, it is giving me a reason to move on from everything I’ve done. I’m excited about putting it out and also putting it behind me.

CP: When you look at the track listing, can you see how much you’ve changed from song to song and album to album?

Brandy: With each album, I was a different person. On the songs from the first album, I was really young and vulnerable. I didn’t really know a lot—all I wanted to do was basically sing. You can just tell that it’s a person singing from a genuine place, and also a place of basically no experience. I was singing about being attracted to the opposite sex, but I had no experience behind it. And then when you get into the songs on NEVER SAY NEVER, the songs started to get a little deeper. I was about 17 or 18, and I was starting to experience how it felt to be in love, going through the different emotions of growing up. I felt like I had the pressures of the world on me, but I also felt on top of the world. With FULL MOON, I had gone through a lot of big changes personally, particularly having a baby. And with AFRODISIAC, I was falling in love and feeling really good about myself, really confident. On the BEST OF BRANDY, you kind of get a chance to witness a young girl coming of age and growing up and making so many different mistakes. You really get to know me as a person and everything that I’ve gone through. That’s what I’m most proud of, because you know, a lot of people are in it just to be in it, but I’m in it because it means a lot to me.

CP: Do you have any regrets about the past?

Brandy: I know that I’ve made some mistakes in my life, and I don’t want to repeat them, but at the same time, I wouldn’t know that they were mistakes if I didn’t make them. I just feel like with life comes challenges, and you have to see it as a learning experience and move on. You can’t spend time regretting. I mean, life is basically right now anyway.

CP: Now, let’s talk about your fans, specifically your gay fan base. Does it seem to you that you have a lot of gay fans?

Brandy: Yes, it does. It’s funny, recently I was in a parking lot, and one of my gay fans came to the car and knocked on the window. He said, “Oh my God, Brandy, you’re so beautiful, I want to be straight!” It was the funniest thing. I knew that he was just playing with me, but that was his way of saying I was beautiful to him, and I was really flattered by that.

CP: A lot of gay men seem to like glamorous, larger-than-life singers. Do you have an idea why?

Brandy: I do get that sense, I don’t know why that is. I mean, I like glamorous divas too!

CP: Do you have an opinion about gay marriage?

Brandy: I just think that love is free, that’s what I think. I feel like if people want to be committed to each other, I don’t think there should be any problem with that. I don’t judge people on what they do. I just know that love is free, and anybody can feel it, whether it be with someone of the same sex or the opposite sex.

CP: I imagine, that being in show business since you were young, you have been around gay people for a long time. Do you have a lot of gay friends?

Brandy: I do. And I love them—it’s no different. I don’t even like to categorize anybody, saying they’re this way or that. If I have a great chemistry with someone, that’s what’s important.

CP: Do you have definition of moral values that you live by?

Brandy: Well, of course, there are a lot of things I wouldn’t do and a lot of things I would do, but what I wouldn’t do is what I wouldn’t do—I don’t want to put that on anybody else. That’s just me, but everybody is different. But for the most part, I just try to live in the moment. That’s what I’m trying to do now. That’s like the hardest thing, because the mind always wants to think—to live in the past or be in the future. The mind doesn’t want to stay in the moment, but I’m practicing that right now.

CP: How would you react if your daughter or a future child told you they were gay?

Brandy: I don’t know because that hasn’t happened yet. But my reaction wouldn’t be judgmental, I know that. I would just be there for them with whatever they need from me, whenever they need it.

CP: You’ve done a lot of acting in your career. Would you ever play a lesbian in a movie or television show?

Brandy: There was this documentary called “The Execution of Wanda Jean,” and I just thought her story was so great. She was a murderer who changed her life in jail. And she was a lesbian, and she had murdered her lover. And I was so touched by her story, I thought, I would want to play her in a movie, if that ever happens. I really feel like I could give so much to that role if they ever made of movie of her story.

CP: What’s next for you musically?

Brandy: I really don’t know. All I know is that whatever I do, I want it to be amazing, I want it to be heartfelt. But I really don’t know. I feel like I’m in one of the best positions in my life—I’m just off a major label, and I have the choice of going back to another major or to do everything independently, my own way. I’m really taking my time because I don’t want to make the wrong decision. At this point in my music career, I can’t make any bad decisions. I have to make all the right decisions. I just have to be patient.

CP: What about your acting career?

Brandy: I have a television show I’m working on. I’m acting as a producer right now, developing the show with Touchstone, and we’re getting it ready to go for Fox. Hopefully, that will happen the beginning of next year.

CP: In closing, anything you want to say to your gay fans?