Staying power: an interview with Jon Ginoli of Pansy Division

I’ve had a lot of crappy New Year’s Eves when I was single. 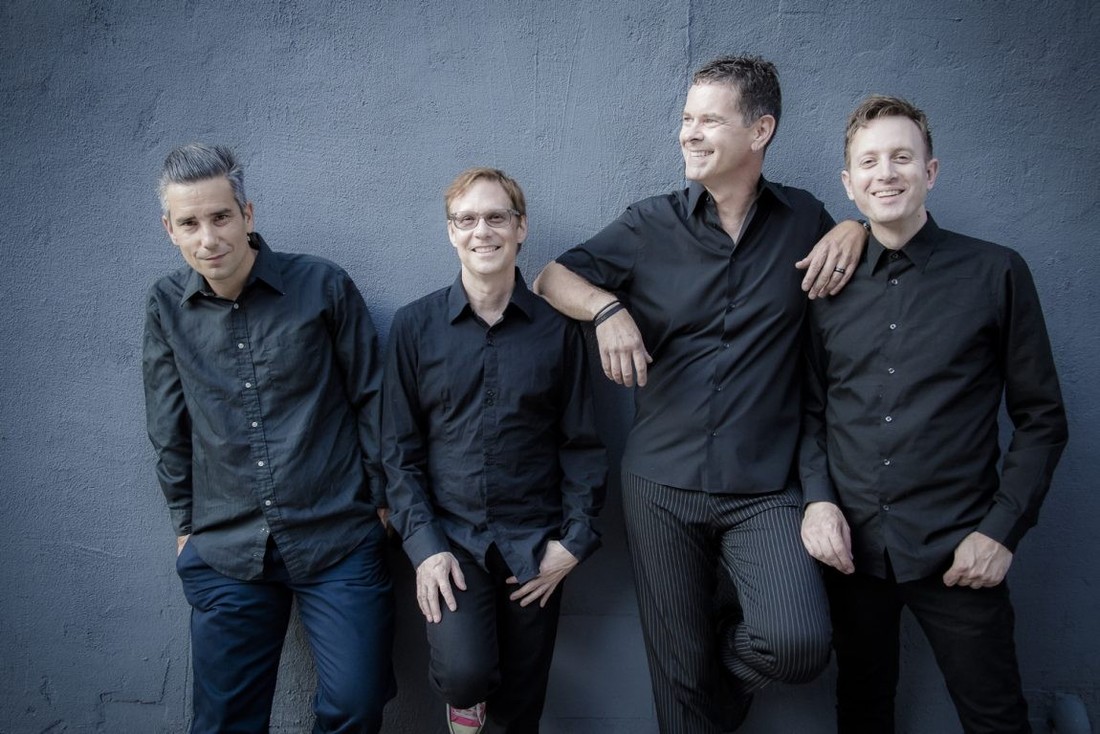 Longevity in punk rock can be something of a challenge, so imagine how difficult it must be for a queer punk band such as Pansy Division. Remarkably, original founding members Jon Ginoli and Chris Freeman are still at it, along with longtime member Luis Illades and relatively new member Joel Reader. Refining the sound fans have come to love over the years, trailblazers Pansy Division returns with its ninth studio album Quite Contrary (Alternative Tentacles). Even with the band’s “geographical dispersion,” as Ginoli calls it, and the seven years between albums, Pansy Division will still rock your socks off (and just about anything else you are wearing). Jon was kind enough to get up early to do this interview in September 2016.

Gregg Shapiro: Jon, I’d like to begin by talking about the Quite Contrary CD cover on which Marcus Ewert and Moon Trent, the cover models from 1996’s Wish I’d Taken Pictures are reunited. How did this concept come about?

Jon Ginoli:  I had a concept for the album before we recorded it. It’s our 25th anniversary, so I thought it was a milestone. What do we do with an album cover that denotes a milestone? Thinking back, I was looking at the old album covers and I thought it would be interesting to see what the models look like now. That was a good metaphor for the passage of time and the fact that we’ve evolved and changed. I talked to both Moon and Marcus about it more than a year before we did the album cover. The original Wish I’d Taken Pictures album cover was racy. We took a bunch of different kinds of photos, some of which were racy and some not. The Wish I’d Taken Pictures album cover was sexy, but also intimate. We thought at this point the intimacy was more important. In the early days of doing our albums we had cute young guys on the cover and we thought, “Oh, we could just do that again. Or we could get people our age, as we’ve certainly gotten older. Let’s see how that looks.” We thought it looked great! It was my idea to bring it back to these locations with the same models, using the same photographer, 20 years later. Lo and behold he has not repainted. Or at least if he has repainted the room where we took the original photos, he painted it the same way as 20 years before.

GS: You were even able to use the same pajamas.

JG: I couldn’t remember whose those were. They were the photographer’s. We had the whole thing set up and I hadn’t thought about the pajamas. I showed up to the photo shoot and there they are. I don’t think they’re the most particularly beautiful pajamas, but there’s continuity there.

GS: Speaking of covers, I really love Pansy Division’s rendition of Pet Shop Boys’ “It’s A Sin,” which brings out the rock edge of the song. Why did the band choose to cover that song?

JG:  It was kind of a happy accident. The band’s been around 25 years. Chris and I have been around all of that time. Luis has been around for 20 of those years. Joel, our lead guitar player, joined in 2004. We’d been a trio for the first six or seven years. Then Patrick Goodwin joined and he was our lead guitar play from `97 to `04, but he couldn’t tour anymore. He had work. Joel filled in once. He was in two other bands with Luis. We were playing this show and Joel offered to fill in. He learned a set of our songs very quickly. We barely had a chance to rehearse and it went great. We just kept playing with him because he loved our band. But he was straight. The idea was to have Pansy Division be an all-gay band. After a certain point, and we’d been together for about 13 years, we thought having an ally in the band who knows our music and loves our band, is just as good as having a gay band member. So, we’re ¾ gay [laughs]. He knows what he’s in for. He joined the band and we hadn’t made a record in a while. This is the second record he’s on with us. (On 2009’s That’s So Gay) he wrote and sang a great song called “Some of My Best Friends.” After he’d been in the band for a while he said he’d like something else to sing. It was his idea to do the (Pet Shop Boys) song. It’s actually funny because if you’d asked me what Pet Shop Boys songs Pansy Division should do, I would have said “Rent,” which is one of the most barbed Pet Shop Boys songs. The thing is, we used to do a lot of covers in our early days. We stopped because we didn’t want to be known for that. It’s fun to do them but we had a lot of our own songs to do. We hadn’t recorded a cover (song) for an album since Wish I’d Taken Pictures. Joel suggested “It’s A Sin” and it sounded great. People loved it live. We thought, “Let’s just do it.” It’s one I wouldn’t have thought of. I’m not a huge Pet Shop Boys fan. I like their writing. I’m just not an electronic music fan so much, but Chris is really into them. We’re fans to some extent. To me, we’ve improved upon the original just because I like the style of music we do, as opposed to the style of music they do. I think it works.

GS: “Kiss Me At Midnight (New Year’s Eve)” is a nice addition to songs about New Year’s Eve, a holiday that is celebrated and derided in equal measure. What’s your honest opinion of New Year’s Eve?

JG: I’ve had a lot of crappy New Year’s Eves when I was single. Actually, I had some crappy one when I was in a relationship [laughs] for a long time. I had a boyfriend for 11 years and he hated New Year’s Eve. He refused to go out. He’d say, “I’m tired. I want to go to bed.” It was 11:00 on New Years’ Eve [laughs]! It’s one of those reminders that you’re single on New Year’s Eve. “Hey, do you have somebody to kiss on New Year’s Eve?” Well, no. Once I did [laughs], it was somebody who didn’t want to go out. What really got me thinking about the song was one year when I did have a date on New Year’s, I thought, “Wow! That was great! I should do that again.” Of course, the next year I didn’t, so I wrote the song after that. I thought it would be the sequel to Pansy Division’s popular Christmas song, “Homo Christmas,” but no, it ended up being a completely different thing.

GS: Pansy Division addresses 21st century gay etiquette on “Too Much to Ask” and “You’re On the Phone.”

JG:  Joel had “You’re On the Phone” partly written. I asked if he would write some lyrics to make it more topical. I said, “You can’t be too critical because everybody’s on their phone. It’s just a matter of extent.” We’re trying to write something with up-to-the-minute subject matter without being over-the-top about it. One of the things in the song is the spoken word exchange between Chris as the caller and a phone operator. It’s an homage to those early `60s girl-group songs that we love. “Too Much to Ask” is one of my favorite songs on the record. Usually, when Pansy Division ends up with a serious topic, we try to satirize or make fun of it. In this case, I was just too pissed off. It’s probably one of the angriest songs we’ve done. Like I said, I had a boyfriend for a very long time and when we broke up, it was 2010. I had gone through the beginning of the 21st century when everybody was on online (hookup) websites and apps. I’d never done any of that. But I heard about it all the time from friends of mine. When I realized we were breaking up and I was going to be single, I thought, “Good. I’m really looking forward to these apps and websites because people are always talking about them.” I think my experience with them has been pretty typical in that they are frustrating. The disposability of how people treat each other on these dating apps; that they are so willing to lie to each other about getting together, making a date and not showing up. It’s happened so many times that I got really angry. How is it acceptable that because you meet on this electronic medium that you can be flippant and so disregarding of other people? I guess I expected that it would be different and now it’s just so commonplace. It’s a protest song [laughs], not against an issue, but just a personal issue of how gay guys treat each other. Not every song is a personal song, but that one is.

GS: “Blame The Bible,” the album’s glam-rock centerpiece, is one of the band’s most political statements.

JG: Chris, Joel and Luis came up with that one. It came up out of conversations we were constantly having. “Did you see what this creep did? Did you hear what they said now? Not another one!” The tension among the right-wingers and the hyper-religious about sexuality and what physical behavior is supposed to be like is so strong that you get all these uptight people with all these contradictions. That was kind of the original concept for Pansy Division. “What do gay guys talk about that we don’t hear in a song?” We always talk about this, we’re all political with a small “p,” but every once in a while it’s good to be specific. It’s an election year, but I think it will last past this election, unfortunately. It’s longtime bugaboo – the bad treatment of gay people by the religious right. Where does it all come from? The bible is the source of all this hatred and it gets described by the people who believe it as “love” and “the word.” The bible is one of the sources of people’s beliefs. They’ll say, “I believe this and you deserve that because this book says that.” That was the last song we did for the album. It was unfinished and when we got together to record we had to finish putting it together on the spot. As the political train got rolling, there seemed to be all these people running for President on the Republican side who had all of these hateful views. It takes a village of hatred to get a Republican nominee. This is the kind of stuff we’re worried about, let’s write about it.

GS: There are several dates in a variety of cities on the upcoming fall tour schedule. What can fans expect to hear?

JG: I think we’re playing about half the (new) album live. We still haven’t rehearsed for the tour. We’re getting together the weekend before. I have a set list, but I’m not sure it will be adhered to once we get together and play these things. It will be a mix (of songs).