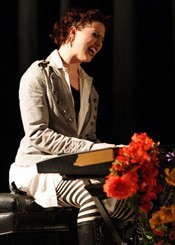 Try as you might, it’s pretty damn impossible to categorize the music of The Dresden Dolls. Sure, many labels have been bandied about: theatrical rock, punk cabaret, manic-musical, neo-glam-torch. But forget about what you’ve read—you’ve got to hear it to believe it. For the past five years, this dementedly dramatic duo—writer/singer/pianist Amanda Palmer and drummer Brian Viglione—have slowly but surely been building one of the most passionate and diverse fanbases in all of rock. Music lovers of all stripes have responded with passionate fervor to songs that detail the often brutal emotional and sexual lives of a diverse cast of misfits, crazies, compulsives, and sociopaths.

After signing with Roadrunner Records in early 2004, the band has been enjoying a whirlwind schedule that has included headlining sold-out tours on four continents, opening for Nine Inch Nails, performing at the world’s biggest festivals, including Coachella, Fuji Rock, Roskilde and Glastonbury, writing an original musical at the prestigious American Repertory Theater (scheduled to premiere in 2007) and releasing an innovative and acclaimed live DVD. Their second album, YES VIRGINIA, received universal raves when it was released this past spring and became the #1-selling new title of the week on the Billboard album chart. YES, VIRGINIA is the follow-up to the 2004, critically acclaimed self-titled debut, which slowly built from selling 275 copies first week to a total of over 100,000 copies sold in the U.S. alone.

The band is touring with Panic! At the Disco this summer and as a special treat for their fans, they’ve created a series of events along the tour route that mix short films submitted by fans with Dadaist vaudeville antics from a myriad of performers, all topped off by a special performance by Palmer.

Here, Palmer talks freely about her “fetish” for freedom of expression, her songwriting process, and her musical partner’s penchant for sequined, Brian Boitano-like blouses.

CP: Let’s talk about sex. Listening to the lyrics of your songs, sex isolates rather than connects. And at times, there’s a brutality and a deviancy about it. What is the personal origin of that kind of perspective?

AP: Well, the first important thing to know about my particular style of songwriting is that I tend to write about topics that are inherently conflicted and dark. And I think that people are often really surprised that I’m a pretty relaxed, balanced, happy person. I can be that way because I’m outputting all of this heavily charged, dramatic, isolated kind of music. When I really want to sit down to play the piano and pour my heart out in a song, it’s usually because I’m upset about something. I don’t ever write songs about the fantastic, loving, emotional sex that I’ve had. I don’t write songs when I’m just gazing at the sky on a beautiful day—it’s just not a song topic for me. Really, in that moment, I don’t get anything out of it except the pure enjoyment of the moment, so I just want to actually enjoy the day.

AP: I never go into a song with a political agenda. Maybe I have an artistic agenda. But usually, I have an idea in my head, and I want to get it out. The hardest part of my job—much harder than writing itself—is filtering out all of the judgmental, politically sticky questions that are going to come up when you start writing about certain topics, including sex. I try really hard to stay away from even asking those questions. There’s a real power in ambiguity. There’s a real power in not staking your political flag and declaring your views. I try to keep my songs deliberately interpretable. It keeps it interesting for repeated listening. Why would I write a song about how I feel about transexuality? For me, it’s more interesting to bring up ideas and images with no direction or agenda, and then everyone can process the song based on their own feelings.

CP: In other songs on the album, you seem to bemoan the loss of intimacy in our culture, a loss that’s resulted, as least partly, from the technological advances in the way we communicate—email, cell phones, BlackBerrys, etc. Is something that you feel in your everyday life?

AP: Yeah, I feel it in my own life; I see it around me a lot. I feel like I see people connecting more and more on a superficial level and less on a profound level. Everyone’s collecting friends and contacts so fast that you really can’t connect deeply with anyone. I think that can actually make you very sad. I was having a really hard day yesterday, and I looked down at my phone, and I had one of those moments where I felt like calling someone. I had already talked to my best friend, but I still needed to talk. So, I looked at the phone, with its 172 contacts, and I just started scrolling through the numbers really fast. I thought, “Technically, I could reach out to any of these people,” but I sometimes feel that I’ve just spread myself too thin.

CP: I’ve read that your music, which has repeatedly been labeled “punk cabaret” in the press, has been influenced by German decadence, the Weimar Republic, Kurt Weill, and even Liza Minnelli. Your music really doesn’t sound like anything else out there. What do you feel is the core influence of your sound?

AP: Those labels are a necessary evil, honestly. As soon as journalists start to write about us, I feel like their first job is to find a label for the music. And if there isn’t a name for it, they make one up. On the other hand, a lot of ink has been spent on us that says, “I don’t really know how to classify this.” That’s fine with me—I actually find that rather flattering. If it’s easy to explain, then it’s easily disposable.

But it’s also been hard for this band because we had no set niche—we had no set audience or demographic who would obviously be into this band. We literally had to win people over one by one.

CP: There was interesting statement in your press, though, which said that, in spirit, the band in more akin to Sid Vicious than to Liza Minnelli.

AP: [laugh] Actually, if it came down to a choice between them, I’d have to say I’m closer to Liza Minnelli. It’s a stretch to find something that Sid Vicious and I really have in common. He wasn’t really a songwriter, he wasn’t really a musician, he had a generally negative world outlook, and he had a drug problem. But there is something that the three of us do have in common--we’re all exhibitionists.

CP: Now, let’s talk about your fans. Are you conscious of having a gay fanbase?

AP: We definitely have our fair share of gay fans. I’ve gotten a lot of direct letters from people who are gay, bi-, and transsexual. To me, it seems it’s clear as day that this band would appeal to someone who was gay or sexually out of the mainstream. I figured out that I was bisexual when I was a teenager. I think Brian found out he was an actual textbook cross-dresser when he was like twelve. And I’ve never met a more completely straight guy who is so passionate about cross-dressing than Brian. He does it occasionally on stage. He has a whole collection of clothes that he calls his Brian Boitano Collection. He’s really into gaudy, sequined dresses and tops. You should check out the gallery on our site. There are some great shots of Brian in drag.

CP: Why do you think gay people are drawn to your music?

AP: This band at its essence is about total freedom of personality. As corny as it sounds, we are about freedom of expression, whether its sexual, musical, aesthetic, etc. So, we encourage each other—Brian and I—to follow our impulses, whether it’s in the bedroom or onstage. You can not only hear that in our music, but it comes across in our stage shows, in our photo shoots, in our interviews, in everything we do. If you had to boil down our philosophy as artists, it would be, “Listen to your inner voice. What do you really want to do, and why aren’t you doing it?” If that means you’re gay, that’s an easy one. We feel really passionate about people being emotionally honest with themselves. It’s almost a fetish of mine.

The Dresden Dolls play a sold-out show at Chicago's House of Blues on Friday, July 7th.