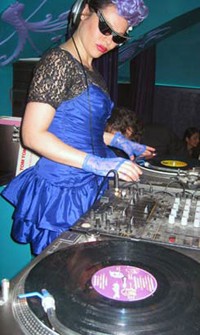 I know all of you remember Deee-Lite and of course front woman Lady Miss Kier, who was essentially a female drag queen. The cuddly, mainstream-pop version of New York drag culture and deep club music, they stayed faithful to their pan-cultural, pansexual, musically wide range of dance-utopian roots throughout their too-brief career. Even their biggest hit, the agelessly compelling suite "Groove Is in the Heart," They were never less than sweet, and rarely less than kittenish--or, as Kier put it, "De-groovy!" Lady Miss Kier has now moved on to greener pastures.

Let’s see what she is doing now.

TM: First of all can you tell us about some of the great memories you had with the group Deee-Lite?

LMK: Opening up for Grace Jones, Parliament Funkadelic at the Montreuax Jazz festival, Prince in Brazil, playing with Jungle Brothers, ESG, and the Pharcyde, getting to meet Eartha Kitt, Patty Labelle, Lee Bowery, Sweet Pussy Pauline and Jimmy Carter. Some people say STAR is just RATS spelled backwards but these stars all impressed me with their humble nature, sense of humor and generosity.

The first time I went to Paris there was a riot in front of the sold out venue - someone lit a car on fire out front. Who was in the front row- Jean Paul Gaultier and Thierry Mugler... they both knocked me off for the next season.

Paris was burning - eat your heart out Willi Ninja.

I also remember having our concert protested against by Mormons in Salt Lake City because we used to throw out "safe sex" rubbers to the crowd during our show.

TM: What did you do after the demise of the band and before you started DJing?

LMK: The very last Deee-Lite concert was in London and after the show I decided to stay. I wanted to know what it was like to live in another country. I was impressed that their government provided beautiful homes for everyone and free health care to everyone in need. I studied music, poetry, history, programming, engineering, and although I was living abroad I reunited with my estranged family in the US. I also learned how hard it is to do absolutely nothing which I picked up easily.

TM: You were "brought up" by drag queens, how has that affected you and your performance?

LMK: Actually, I was brought up by a powerfully fierce feminist who never wore makeup, dresses, heels, or a bra so when my little butch ass saw the Pyramid and Boybar with drag queens

in all their splendor I was like a kid discovering fluorescent crayons for the first time. I have always been a magpie-attracted and mesmerized by their glittering beauty, sense of humor, compassion, awareness and immediately joined the parade. I became a drag queen... something about that double life also intrigued me.

TM: We heard that you were at Four's Flawless and Funky Buddah Lounge last October and coming to Circuit Nightclub this month. Were you DJing these events?

LMK: I DJed at the first two and will be performing live new songs and a few Deee-Lite numbers at Circuit on November 26th. (Event Details)

TM: Tell us about your new music, what inspires you?

Check out the November 26 live performance at Circuit where I will debut some of my new music. (Event Details)

TM: What else do you want our readers to know?

LMK: These are crazy times in US history- don't lose your nerve!!!! Register to vote and make sure that vote is counted this time.