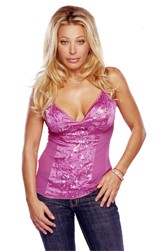 The year was 1987. The hair was BIG. The shoulders were padded. And the dance floor was "totally awesome." That was also the year of Taylor Dayne's first effort as a solo artist—a dance interpretation of the ballad Tell It to My Heart which led to a contract with Arista Records. That smash hit propelling her to stardom. It was followed quickly with the album of the same name. This led her to a string of classic Top Ten singles such as "Prove Your Love," "I’ll Always Love You," and "Don’t Rush Me." Several years and millions of sold copies later, Dayne continued with the hits "With Every Beat of My Heart," "I’ll Be Your Shelter," and the number one "Love Will Lead You Back."

Dayne's career has continued throughout the years with recording, touring and motherhood while never losing her loyal fan base. This down-to-earth songstress stepped away from the microphone long enough to reflect on her music, her career and her family.

PJ: Many of your fans may not know of the diversity of your musical influences--both during childhood, your studies and early in your career. How did that affect your approach to guiding your own career in popular music?

TD: I was brought up in Long Island NY.

My parents exposed my brothers and me to a lot of theatre growing up as well as music. My own personal inspirations and tastes were and are very eclectic, as were my influences which began with the radio…Stevie Wonder to the Carpenters to the Isley Brothers to Neil Young.

As a singer, you start by mimicking the voices that turn you on. I started with Stevie, went to Joni Mitchell, and along the way you find your own sound.

PJ: If my memory serves me correctly, Tell It To My Heart was initially a huge hit as a dance single. Then a full LP had to be made quickly due to its success. Is that just music business legend? Do you recall that specific time and how you felt?

TD: Yes, you’re correct. Tell It was released in August, 1987 as a single—I believe in Europe—and started climbing up the charts. Six months later I was recording a full record and we didn’t have one in the can prior.

PJ: You are remembered for your ballads, and you sing them with as much intensity and passion as your dance hits. How do you prepare to record a ballad?

TD: The first ballad I recorded was I'll Always Love You. I remember being very nervous about how to approach this song, and quite honestly didn’t feel comfortable doing it. It felt too mature for me. So it was amazing for me to hear the vocals and the textures my voice had in the context of a beautiful melody.

PJ: I recall seeing you on television discussing the art of fung shui in your home. I imagine with your work schedule that you must consider you home "sanctuary". What is your favorite day at home like?

TD: Well, home for me is not quite what it used to be. It’s usually a three-ring circus now. But, at moments like this, it’s quiet. I’m in the office. There’s a slight drizzle outside and the roses smell sweet.

PJ: Very Nice. How has motherhood changed you?

TD: That’s such a tricky question. Some people leap right up and have such certainty of the points of change in their life .I would say I’m feeling very responsible and I’m learning to be a better person by trying to be more patient and less selfish.

PJ: You are scheduled to appear at the Names Project event in Chicago. (Event Details) What does it mean for you to perform at an event like this versus a regular concert?

TD: Benefits and shows that are attached to an awareness project are always for the community—so it’s always a good thing.

PJ Gray is a versatile, award-winning freelance writer experienced in feature, human interest, travel, and humor writing, as well as celebrity interviews, short stories, and essays. He is a former Managing Editor for Pride Magazine, a regular contributor to PINK Magazine and a contributor to the popular short story collection, Rebel Yell 2 (Southern Tier Editions).