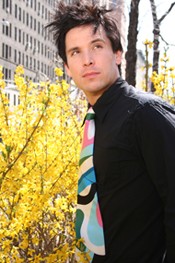 If Kristoffer Cusick has been aided by any witches, they seem to have been good ones. Magic has been kind to the Los Angeles-area native since he began his professional career in Disneyland shows, playing characters like Aladdin. Two years ago, he joined the company of a little Broadway-bound show called Wicked, which has consistently been selling in New York, Chicago and on tour. In New York, he was a member of the ensemble as well as understudy for the part of Fiyero, the aimless prince who becomes a classmate and boyfriend of the two future witches of Oz.

For Chicago's production, now playing at the Ford Center for the Performing Arts/Oriental Theatre, the part is all his. Though Wicked has been especially popular with young girls, gay guys are digging it as well. Could part of the appeal to our community come from Fiyero? The fantasy of a handsome, rich boyfriend who’s sweet but too slow to be threatening and ultimately more concerned about your well-being than his own?

The openly-gay actor and I talked about his character and Chicago's Wicked in the fashionable Chicago apartment he’ll be calling home for the next year.

When I walk down the street in my real life, I may turn a few heads and feel good about myself, but I’ve definitely been able to look at the guys that I go, “I want to be that guy,” because they get attention everywhere they go.

I don’t think of myself in that same way.

So when I go on stage, I don’t think of the role in that respect. In that way, I think of myself as a little more dorky.

KC: Both Joe and (assistant director) Lisa Leguillou were involved with rehearsing the cast. Joe’s obviously very busy... he’s doing a lot of things. Time-wise, I think Lisa was there a lot more. I could not say that Lisa did more or less than Joe did. They’re both really good at what their roles are. Lisa, as assistant director, she’s great at getting things working... getting all the gears of the clock running in time.

So that when Joe comes in…I don’t think that’s necessarily Joe’s bag…trying to get all the little pieces in place... ...so her getting all of that ready was great, so he can come in and do what he does really great, which is direct us and fix up and point us in the direction we need to be.

Now it’s down to a science. Now they know what the characters are and what they need to be.

And they didn’t know that before when we were rehearsing for Broadway or doing the workshop in San Francisco. So yes, there was less physical time with Joe (rehearsing this company) because he’s so busy but the amount of time he did give us was so unbelievably important. It really shaped the whole show.

I feel like Lisa got the whole ball of clay on the wheel there and got it going and got the water going... and that’s so important or you’re not going to have a show, and then Joe came in and shaped the base... made it what it was going to be.

JO: Have you read the book Making It on Broadway?

It’s a collection of anecdotes from people who have performed on Broadway – stars and ensemble members – and their horror stories about things like job insecurity, stalkers and physical conditions of the backstage areas of Broadway theaters.

Do you have any horror stories you’d be willing to share?

KC: When I was doing Rent in Chicago, we had a girl who was writing to us and who was suffering from cancer, had been in the hospital and it was really awful. She had been friends with a lot of the original cast of Rent on Broadway. Anthony Rapp was here playing Mark at the time in 1997-98 when we were here with the tour.

A couple of the original cast members from New York flew out to Chicago to see her.

She said she had been in the hospital several times for different reasons. None of us ever had a reason to believe any of it wouldn’t be true.

We brought her backstage, we did prayer circles with her, we showed her around, we became good friends with her.

A couple of the cast members had regular online dialogue with her, with her friends and members of her family. And in the end it all turned out that she was the same person – she had been posing as her friends and her family under different screen names.

She was not sick. She had pulled this huge scam to become involved with the cast. We were just shocked. None of us could believe it. It was such an invasion of your space. We definitely had more of the stalker situation with Rent than anyone’s ever gotten with Wicked. We have fans and groupies, I myself don’t, not that I know of at least (laughs).

As far as backstage and stuff, each theater has its own problems. The Gershwin Theater in New York is great, it’s a big theater, it’s fun, we love it, but the mice are horrible and you can’t leave anything out.

The producers did everything they could, they tried fumigation and we were careful not to leave food out.

I love to meet people who have regular jobs, and they look at show business as this super, super glamorous thing.

It is glamorous... when you come to the theater and you see these costumes and you see us on stage under the lights, at the stage door we’re signing autographs and you see pictures from these parties where we’re dressed to the nines and there’s fabulous celebrities there and cars and gowns and suits and tuxes and food…but those are the special times. It’s the in-between times... when you look at where performers live... in these tiny 400-square foot apartments with rat and roach problems. You see somebody in a $500.00 gown for one opening night thing, but you don’t realize that gown is sitting in a closet that is the size of a shoebox and that’s the only one they’ve got because it’s not always glamorous.

JO: Speaking of work, I have to imagine the Wicked ensemble works really hard.

Another topic in Making It on Broadway was the ways in which casts of long-running shows goof around to combat the boredom of doing the same show night after night. With all the onstage activity and costume changes, I doubt that there’s time for that in Wicked.

We fight with a lot of injuries. We still don’t know why that is because seemingly the show is not that difficult dance-wise or physically. It’s not that it’s easy, but you’re not talkin’ about Movin’ Out. It’s not a show like Lion King where people are physically drained. Our dancers are working really hard, but they’ll be the first to tell you it’s not like the hardest show I’ve ever done in my life, yet our show is plagued it seems like ...and not just the Chicago company, but New York and LA... there’s a lot of injury. We’re trying to figure out why that is. I think it is because everyone gives 100% all the time. But even in a show where you’re working your ass off and you’re busy changing costumes all the time, we still find ways to make it interesting and you try to find it within a way that the audience isn’t going to notice. We used to have a punching game we would play in New York that left me many nights with bruises on my arms, my legs, with charley horses. We’d be walking around in “One Short Day” and somebody would nail you with a jab punch in your arm. We try to find fun ways to keep each other on our toes and stay excited to be there.

In Part 2 of this interview, Kristoffer talks about his plans for a cabaret act, his life in Chicago and his feelings about being an openly gay performer.