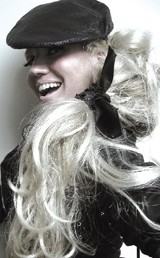 
CP: Tell us a little something about the young Suzanne Palmer?

SP: Well, first off I was a mistake baby. All of my siblings are like 8, 10, 12 years older than me. I was born and raised right here in Chicago. On the Southside in the South Shore neighborhood actually, and thus I was affectionately known as “the white girl, third in from the left.”

CP: How about the young musical Suzanne Palmer? How did she come about?

SP: Interestingly, I had many diverse influences that augmented what kids in my neighborhood were listening to. I would hear my brother in the basement with his garage rock band and at the same time hear my dad upstairs in the living room practicing with his jazz group. And then my mother would be playing Billie Holiday and Judy Garland records that I also enjoyed. But the first person who really caught my undivided attention and became my initial inspiration was Chaka Khan. I just loved how she sang with such emotion: it really connected with me.

CP: What were you doing musically during your late teen years.

SP: Well, I was actually performing professionally, appearing on a few albums, and traveling around a lot with a very secular gospel group called the Victory Singers. I came back home to go to school and to pay for college I did what I did best: sing. At one point I was a singing waitress working along side Shawn Christopher (the singer of house classics such as “Another Sleepness Night” and “Don’t Lose The Magic”).

CP: How did you venture over from gospel, jazz, and R&B to start a dance music relationship with Peter Rauhofer?

SP: I was here in Chicago and went in to record a demo for Mark Picchiotti. From there Mark introduced me to Rob DiStefano at Twisted Records. And this was back in 1995. And then Rob introduced me to Peter, who had me over to Vienna, Austria to record a song for him. Peter and I worked really well together and he liked my voice, so instead of one song I ended up singing on four of the tracks that were on the Club 69 Style release back in 1997. I did “Muscles,” “Much Better,” “Alright,” and “Twisted.”

CP: While folks were familiar with your voice on those original Club 69 tracks, they really got to know your name with the monster hit “Hide U."

SP: Yeah, that was something else when that song came out. Originally, the group Kosheen had released it in Europe and it had more of a faster paced progressive and drum n’ bass feel to it. Peter heard it and approached them about re-making it with more of a house feel to it. They weren’t that interested and so Peter decided to just do it himself on the Star 69 label and brought me in to do the vocals. It’s an incredible song and production; it just really resonated with dance floors all over the world.

CP: You have this new artist album, Home, that has just been released: a collection of 14 uptempo dance-oriented tracks, including your chart-topping songs from the past year: “Luv 2 Luv,” “Home,” and “Sound Of The Drum.” You’re again paired with Peter Ruahofer and his Star 69 Label.

SP: We’ve worked together so much over the past decade and really understand each other artistically. While I definitely was more involved in this project than just being a “hired gun,” the CD is based more off of Peter’s vision. I trust my voice completely with him and thus I think we have something really special here.

CP: You’ve got some of the very best dance music producers in the business working on the CD: Rauhofer of course, but also David Morales, Angel Moraes, Murk, and Cevin Fisher just to name a few. Wow! How was it working with so many of the top names, two of which have won Grammy Awards?

SP: It was a really great experience for me and helped to bring a versatility to the CD that makes it that much stronger. They are all a bit different in their approaches and that could have been somewhat schizophrenic. But since it was done over a period of time that really wasn’t a problem. I recorded the tracks in various locations: Montreal, New York City, and even up in Connecticut at Eric Kupper’s home studio.

CP: Anything extra special or out of the ordinary about the process for you?

SP: Well yes, actually. My husband and I adopted our daughter right during the making this record last year. She’s from China and so we went over there for two weeks to finalize everything and then brought her back to the States. The adoption process really was an incredible experience for us and helped to complete our family. The symbolism of making our home complete in the midst of making this CD, that’s in part why I went with the title of “Home” for the entire project.

So yes, there was obviously something very special that occurred.

CP: Now you’re going to be performing at Circuit Nightclub this coming Saturday night as the first act in their inaugural Summer Artist Series. Will you be touring to other cities in the coming weeks and months in support of the new CD?

SP: Well, I’ve already performed in the last month in New York City, Atlanta, and in Toronto. I’ll be hitting other cities for weekend club dates later in August and into the fall as well.

CP: Everyone I know has their favorite Suzanne Palmer song. For dancing purposes, mine is “Hide U.” I’ll never forget during that winter and spring of 2001 when it first hit how I and the rest of the folks on the dance floor would get so excited whenever the DJ played that song. When I’m in control of the booth and DJing a party myself I absolutely love dropping “Much Better.” I think it’s the old-school house-head part of my personality.

So what is your favorite Suzanne Palmer track?

SP: I don’t know if I have a favorite. It kind of depends on what mood I’m in.

CP: That’s fair, I guess. You know most parents don’t really have a favorite child, though they may favor one child over another depending on the particular time and circumstances.

SP: No wait. Now that I think about it, I’d have to say that “Luv 2 Luv” is my favorite Suzanne Palmer. When I first brought my daughter home from China that was the next song we were making for the album. It was just the perfect song in light of all that was going on with me and I remember singing that song to her and just being so happy. So yes, I do have a favorite after all!