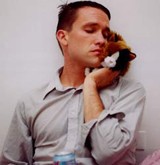 Jamie Stewart is a really nice guy. He's attractive with a slim figure, he has a dry and quick sense of humor, has a unique and unobtrusive sense of personal style and has a serious side that cares about politics and people. With so much going for him, why are his songs SO sad? You have to ask, "Seriously, dude, what is so bad about your life?" But who knows. Coming from San Francisco, where "gay" is part the environment, his band Xiu Xiu (pronounced "shoo-shoo") has found a welcoming community where they can sing about the most painful subjects. Incest and death are just a couple of the many taboo subjects tackled by this artsy collective. A dichotomy of noise and folky blasts only serves to accentuate the bipolar ups and downs of life described in Xiu Xiu's songs, and what we have here is one of the most daring and important artists the gay community has to offer. In the middle of a North American tour, Jamie is pleasant and forthright, and had a lot to say about his music and life as the driving force behind Xiu Xiu.

Interview with Jamie Stewart of Xiu Xiu in his van, outside of the Bottom Lounge, 3/24/05.

ER: How long have you been performing as Xiu Xiu?

ER: How many people are in the band and where are you guys from?

JS: Currently it is a little hard to say. On this tour there are two people. On the next tour there will be three people. Probably about eight or nine people work on recording pretty regularly. A few people live in Seattle and a few live in the bay area—San Francisco and Oakland.

ER: And you are the main songwriter?

JS: Oh. I guess for all intents and purposes, usually I get the song started and people work on them together.

ER: Since you first started out, how has your music changed?

ER: As a band, do you have a mission or a vision?

JS: (Laughs) (Pauses) That’s another funny question. We very definitely do have something specific in mind that we are working on doing and that we are hoping to achieve. But I’m hesitant to say what that is because if anybody has ever heard what we are doing or may at some point hear what we are doing, knowing it might color what their experience of it might be. I don’t think it’s necessarily our business to impose our feelings about what we are doing on somebody else. That’s the second question I’m kind of not answering so keep them coming...

ER: What is your favorite album of yours and why?

JS: (Laughs) Fag Patrol. This is going to sound totally ridiculous. I was working on it with Cory Mcullick. He is the only person who has been in the band since the very beginning who is still working on stuff. That record is almost entirely just guitar and vocals and acoustic versions of previously recorded songs. It was at an unbelievably bad time in my life. Hands down, that period was the worst time in my entire life. I was having a really serious nervous breakdown and drinking heavily. Large parts of that record I really don’t remember working on at all. The parts that I do remember working on, I have a really clear picture of it being the least calculated thing we have ever worked on. It just seemed very essential to getting through the day to be able to work on it. I think in some ways that sounds mellow dramatic and self aggrandizing. But, personally, for lack of a better word, it is the most pure thing that we have worked on. I guess that’s why I can appreciate it. And also, largely, because I don’t remember it very well, either, I can say that I appreciate it. (laughs)

ER: What percentage of your lyrics would you say are autobiographical?

ER: Your music has been described as difficult. How do you respond to that?

JS: (Laughs) Let me think of a difficult way to answer that. Ooh! That was cheap! No…I don’t care. We are just trying to make the music that we’re making. If some people find it difficult then oh well. There’s a ton of other not difficult bands that they can listen to if they aren’t interested in stuff like that. I guess most of the bands that we are interested in are probably perceived as being difficult for whatever that means. I don’t think it matters. Whatevs!

JS: It’s difficult for me to answer how I think it’s being perceived. I can’t get into people’s heads. The reason that we are doing that is that we are trying to have the music reflect the emotionality and what the song is about. Sometimes those are the sounds that seem to reflect that best…Or that we feel, at the moment, seems to reflect that best.

ER: Why is it important to be “out” as a musician?

JS: I think it’s important to just be out as person, particularly right now. There are enough people on earth at the moment doing there best to make that as difficult as possible. I think the more that those who can’t deal with queer people are faced with them on a regular basis the more they are able to humanize them and potentially get over their own bigotry. On the other hand it’s not queer people’s responsibility to help people get over their own bigotry. That answer isn’t such a good one, though. (Laughs)

ER: Well do you think that for someone who is admired by a group of strangers, even if just tonight here at the Bottom Lounge, but as more or less publicly known person, being out can change things?

JS: That’s really difficult to say. From my own experience, having appreciated different queer artists, having known that they were queer helped me feel better. It made me feel more embraced. That, potentially, is a good reason for people who are part of a more public dialogue to be out. I don’t know. It must change things. It has for me.

JS: Nothing negative really. Not as part of the band. I my life I have, as probably almost everybody who is out has. A far as band stuff, no, just positive. People who are interested in what we are doing are usually incredibly generous about sharing their feelings with us. We appreciate it a lot. We are really, really lucky that way.

ER: Do you feel that you are part of any type of community?

JS: I live in the bay area, so it sort of transcends community there. Luckily, it’s just a normal part of the entire environment. It is a very fortunate and weird thing. As far as being part of a queer music community, not really. Most of the people that are making music that I’m interested aren’t queer. Probably about 3/4ths of them aren’t queer. But everybody that I know is very embracing and supportive of queer people.

ER: How does it affect you relationships outside of the band?

JS: Only in so far as that I don’t have any. Only like family and friends. A far as maintaining any sort of love relationship, I’m really terrible at that. But it has nothing to do with touring. (Laughs)

ER: Tell me about the new album.

JS: It’s called La Foret. One of the guys who we are touring with said it’s “wonderfully abrasive.” He told me to say that the next time someone asked, so there you go. (Laughs)