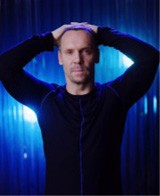 A man of many musical talents and interests, DJ Barry Harris started DJing at dance clubs in Toronto back in the early 1980s.

After honing his skills as a DJ for several years playing the disco-infused house music of the day, Harris married his booth skills with his musical abilities (he plays guitar and piano) and started a brilliant career as a producer and remixer.

Throughout the late 1990s and into the new millenium, Harris paired up with his friend Chris Cox to produce an impressive string of dance music hits under the name Thunderpuss.

The duo dominated the dance music scene as they topped Billboards’s Dance Music chart more than 30 times with tracks such as “Play” by Jennifer Lopez, “Your Love Is My Love” by Whitney Houston, “All For You” by Janet Jackson, and “What It Feels Like For A Girl” by Madonna.

Harris is no stranger to Chicago, having made many club appearances here over the years.

He will be back in the city for another prime event weekend, spinning at Sound-Bar on the Sunday night of Market Days weekend. (Event Details)

I recently spoke with Harris, whose based out of Los Angeles,

by phone for this ChicagoPride.com Quick Chat.

CP: You wear so many hats: DJ, remixer, producer, musician.

Is one a bigger part of you than the other?

How would you describe yourself?

BH: All of the above.

I was playing musical instruments while I was growing up and DJed for five years before I did me first remix project. Back then it wasn’t cool to be a remixer, it was all about being a DJ.

Things have obviously changed over the years.

I’m comfortable with each of those descriptions.

Though currently I really haven’t been doing any remixing or producing and am mostly just DJing.

CP: Of all the various remix projects you’ve been involved with over the years, which ones are your favorite?

BH: “No More Drama” by Mary J. Blige that I did with Chris is probably at the top of the list. I’m also real proud of “Stranger In My House” with Tamia.

CP: Which artists haven’t you worked with yet that you’d really like to do something with?

BH: There really isn’t anyone on that list. I’ve been quite fortunate and worked with some of the best already.

CP: How do you typically program your DJ set?

BH: Well of course it depends on lots of variables, but normally I’ll start out a bit with some garage house and then work my way toward a more tribal groove.

I tend to have a decent amount of vocals in my sets.

Toward the end it’s more of a happy house feel.

CP: What DJing influences have been important to your development?

BH: Early on in the mid 1980s I was influenced by the DJs out of New York City.

Of course as the house music scene exploded in Chicago, the DJs and the music coming from there couldn’t be ignored.

Currently, the real creative developments seem to be coming from Europe, especially out of London.

Not so much from the U.S. anymore.

CP: Are you vinyl or CD guy?

As much as I travel it's just much easier.

CP: How do you go about getting new music.

Do you go record shopping a lot?

But most of the time I talk with other DJs and producer friends of mine to find out what’s good out there.

CP: Your face and your “sound” are quite familiar to those of us in Chicago: over the years you’ve had numerous club dates here, including most recently at Hydrate, and you gave a great performance at the Closing Party of Fireball a few years back at Excalibur. Why do you think that you and Chicago have been such a good match over the years?

BH: I like Chicago a lot and am very comfortable there.

I feel like I’m in my neck of the woods when I get to Chicago.

Plus I feel somewhat inspired coming to the center of the dance music world, where house music was born.

CP: What’s the deal with your XM Radio show?

BH: Well, XM is satellite radio which is heard all over the country and I do a one hour show every Friday night.

I record a mixed CD at home each week and send it in.

I’m doing a lot of different things: maybe one week heavy on electro and then the next week more old school house stuff.

What do you really like to listen to when it’s time to venture away from the dance music beats?

BH: David Bowie!!!! That man is the original chameleon, not Madonna.

I’m amazed and impressed at how he’s musically reinvented himself throughout the years.