I believe comedy is one of the best ways to process pain and inequality. 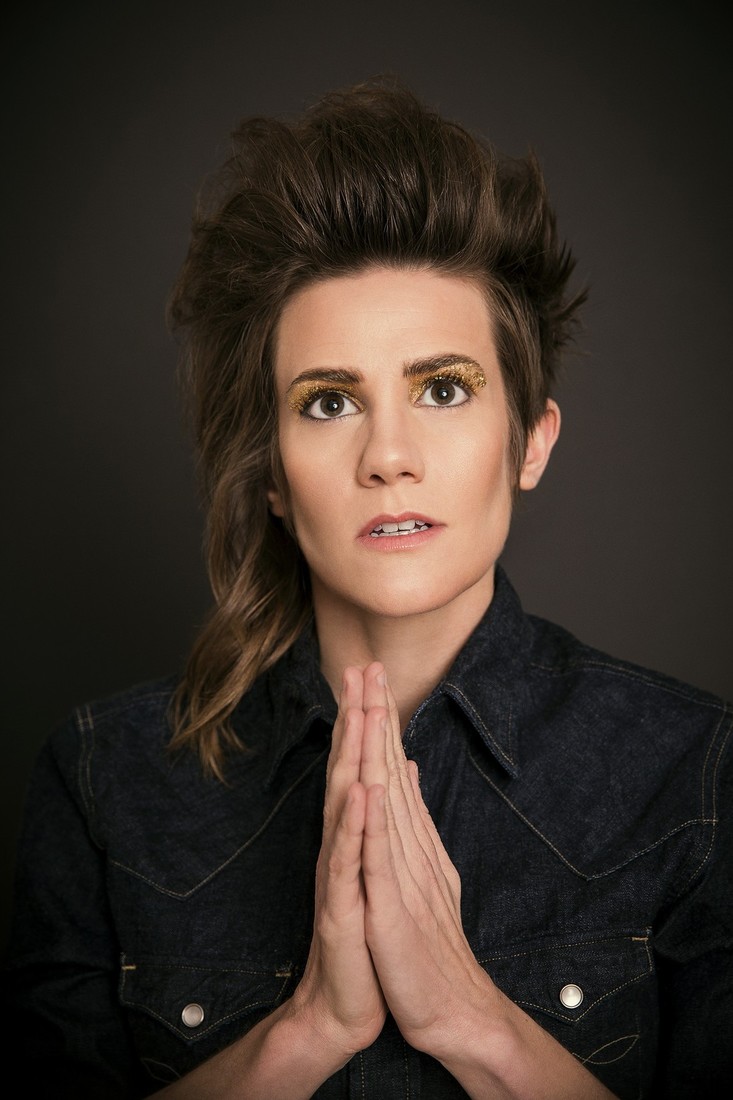 In the world of comedy, specifically lesbian comedy, Cameron Esposito is the new reigning queen. This is especially true now that Lea DeLaria wants to be a serious actress and singer. Esposito, whose delivery sounds like a cross between Tig Notaro and Paula Poundstone, and her trademark asymmetrical haircut, has them rolling in the aisles on her new stand-up comedy special Marriage Material, debuting March 24 on the new NBC comedy channel Seeso. Filmed in front of a live and enthusiastic hometown audience at Chicago’s Thalia Hall mere days before her wedding to fellow comic Rhea Butcher, Esposito skillfully demonstrated why she’s an in-demand performer. I spoke with Cameron about the special and her career in February 2016.

Gregg Shapiro: In the realm of comedy, Chicago is known first as the home of improv and then as a place for stand-up. Did you put in your time in the improv scene or did you go directly into stand-up?

Cameron Esposito: I got my start doing improv in Boston during and after college, then moved back to my hometown Chicago, an improv Mecca and never did improv again. I'm ten years into standup and have definitely found my home.

CE: I did the opposite. Only improv in Boston. Only stand-up in Chicago. Well, standup and whiskey and thin crust pizza. That's right, thin crust [laughs] in Chicago.

GS: You talk about going to Catholic school in your show Marriage Material, which was filmed at Thalia Hall in Chicago. Were you a class clown?

CE: Nope. Total jock. Three sport athlete, captain of the swim team, into reading and committed to Student Government. But I was a big wacky. Like very friendly and wore lots of weird belts.

GS: You include social commentary in Marriage Material, on subjects such as guns, marriage and body shaming, to mention a few. How do you see the role of comedy when it comes to social issues?

CE: I believe comedy is one of the best ways to process pain and inequality. It puts folks at ease in a way that creates real dialogue and movement on issues that, if approached directly, would trigger knee-jerk emotional responses. But, also, comics really just talk about what they're interested in and I'm most preoccupied with working for social change.

GS: You make reference to your haircut and I wanted to ask you to say a few words about Chicago comedians, such as you and Emo Phillips, and hair.

CE: Emo still sports his classic cut, which is beautiful to behold in person, My wife and fellow comic, Rhea Butcher, is known for her David Lynch-esque [hair] as well. But other than us, Chicago stand-up is kind of a sea of beards and glasses. Well, a lake, I guess. A lake of beards.

GS: I’m so glad you mentioned Rhea. Your show was taped for Seeso in Chicago a couple of days before your wedding to Rhea, who is also a stand-up comic. What’s it like living in a two-comedian household?

GS: Moving on. You work in a very Chicago specific bit about the homophobic Old Navy preacher. How important is it for you to include, as you call it “local stuff” into your show?

CE: It's always fun to connect with the audience in a specific city and give them some points for being unique and having a culture all their own. On my side of things, though, the motivation is even stronger. Connecting to each city I'm in keeps stand-up fresh and keeps the challenge alive. And I love a challenge.

GS: Menstruation humor is a big part of the show and you talk about how no one ever makes jokes about it. Are there any subjects that you consider to be off-limits?

CE: [Laughs] "Menstruation humor" is an amazing statement. No, no topics are off limits. However, heavy or taboo topics require special care, attention and clarity. That's when things go south: when a comic takes on a huge topic without realizing it's huge.

GS: It was recently announced that you and You're the Worst creator Stephen Falk will be collaborating on a series exploring gender and sexuality for FX. What can you tell me about it?

CE: It's set in Chicago!

GS: That’s it, huh? Okay, Cameron. Finally, if Thalia Hall was a drag queen, what would she look like?

CE: Divine in a Bears jersey.