Sing out, sister: an interview with Margaret Cho

I’m trying to incorporate all of the different elements of my work as a performer. 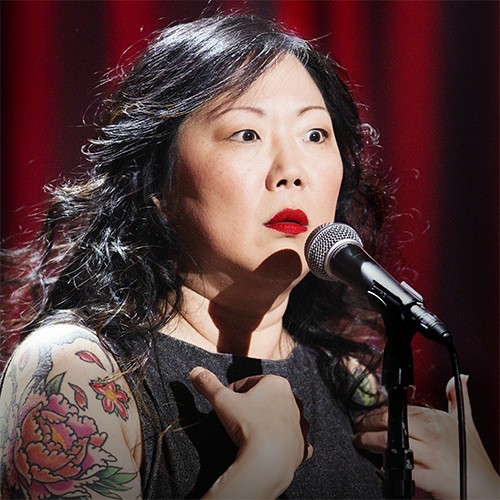 Margaret Cho talks about her forthcoming music CD and much more

Fanny Brice wasn’t the only funny lady who could carry a tune. Margaret Cho did a good job of establishing herself as a singer and songwriting collaborator on her 2010 debut music album Cho Dependent. One of the busiest women in show business, between her stand-up comedy shows, Showtime specials, co-hosting duties on Fashion Police and her activism for queer, women’s and animal rights and causes, Cho has found the time to write and record her follow-up album American Myth (Clownery Records). Due out on April 29, Cho recorded the album with her band The Dog Children, and co-wrote most of the songs with out singer/songwriter Garrison Starr. She describes it as “a glamorous and glittering tribute to family, comedy, anger, fame, gayness, grief, fat pride, love and hate.” I spoke with Margaret about the album and more in early 2016.

Gregg Shapiro: Margaret, I had the pleasure of attending your concert in Miami in the fall of 2015, and the thing that struck me when you sang during the show’s finale is how increasingly strong your singing voice has become. You were belting!

Margaret Cho: Why thank you!

GS: Are you taking voice lessons and who is your voice teacher?

MC:  I had been taking various lessons. I’ve also had a lot of incredible singers give me a ton of great advice. From Cyndi Lauper, who kind of taught me the basics, and I’ve also worked with Bird. She’s a tremendous coach and she often coaches the contestants on American Idol. I’ve had a great amount of support. I’ve worked with incredible producers who have also taken my voice and brought it to another level. I think I have some natural abilities, but it’s the technique that I’ve been learning from the best that keeps me going. I’m really honored to do it.

GS: When I interviewed Lea DeLaria at the time of the release of her first jazz vocal album, it seemed to me that singing was something she had wanted to do all along and that the other things she did as a performer all led up to this moment. Would it be fair to say that being a singer is something that you have always wanted to be?

GS: You are calling your new album American Myth. Please say something about the title.

MC: It comes from one of the lyrics to the song “Anna Nicole.” It’s a song about Anna Nicole Smith. It’s the archetype of the tragic beauty who is too good for this world. It’s an American myth in the same way we mythologize Marilyn Monroe or James Dean. It’s an archetype we see over and over in film and on TV. That’s what I was referring to and what the song is about. It’s my version of “Candle In the Wind” for Anna Nicole.

GS: I’m so glad that you mentioned the song “Anna Nicole,” which you co-wrote with Garrison Starr. Why was now the time to do this loving tribute to Anna Nicole?

MC: I actually wrote the song with Garrison in 2010. We just hadn’t released it. It seemed too soon. You want to have some time to think about her. The world has changed. I think it’s the right time to look at her as kind of a frontrunner in reality television. She was Kim Kardashian before Kim Kardashian [laughs] was Kim Kardashian. Of course, Kim Kardashian is a kind of archetype. But she owns her beauty and is tremendously successful. There’s no tragedy, there’s no drug story. There’s  just her and her fame and her beauty. But Anna Nicole created that template of somebody that you’d want to watch on reality TV. Somebody that you’d want to invite into your home or as a role model, in terms of beauty and lifestyle and glamour.

GS: As someone who spends a lot of time on tour, have you had the chance to try out all of the songs on the new album in front of a live audience?

MC: Yes, I have tried a few of them. A couple of the songs are a staple in my stand-up comedy. I usually end my shows with songs.

GS: How has the reaction been?

MC: The reaction has been tremendous! Especially to a song called “Kill My Rapist.” I think it’s an important song. It’s not about violence. It’s about a cathartic release. To let go of the anger that survivors often feel (because) they are silenced and not allowed to express it. There’s a great catharsis that happens in the audience. They’ve watched this comedy show, they’ve laughed and laughed, and now let’s take it to something that is serious, but at the same time there’s a dark humor running through it. It’s a good way to bring what I do as a musician into what I do as a comedian.

GS: I’m glad you mentioned “Kill My Rapist” because it made me think of Tori Amos’s song “Me and A Gun” and the way that opened up the conversation about rape, and made people aware of the organization RAINN (Rape, Abuse and Incest National Network). Do you feel like you are reigniting that torch of conversation?

MC: I hope so. I love that song and I love Tori Amos. RAINN is a really important organization and it’s still going strong. I think rock and roll can bring a lot of healing. This year we’ve also seen, “Til It Happens To You,” the wonderful Lady Gaga and Diane Warren song (from The Hunting Ground doc), we’re seeing more of this and people talking about their experiences. It could also be an effect of Bill Cosby and all of his victims coming forward. We’re living in an era of important truth and feminism and women standing up for themselves. This is a good sign.

GS: Did you collaborate with any of the same songwriters that you worked with on your previous music album Cho Dependent?

MC: No. Most of what was just written by me and Garrison. I also wrote a little bit with Roger Rocha, who is wonderful as well. I had fewer collabs on this one because I wanted to settle down and focus on my own songwriting. I also wanted collab with Garrison who is someone I will always work with.

MC: I think I look a lot to Morrissey. I think Morrissey is pretty funny. Of course, Bob Dylan and Patty Griffin; Patty’s not comedic but there are elements where she goes for lightness. There’s “Heavenly Day,” which is a love song for her dog. It’s so beautiful. I love Jill Sobule, another tremendous singer/songwriter who incorporates a lot of humor. There is also the amazing Flight of the Conchords who are very funny. They’re more in the vein of Weird Al Yankovic, who is the ultimate!

GS: Leslie Jordan is featured in the video for “Ron’s Got a DUI,” also co-written with Garrison. What was it like working with Leslie on the video?

MC: Oh, I love Leslie! He’s a sparkling star. There’s so much effervescence and so much joy in everything he does. I really love bringing his energy to a really nice fairy tale; this great relationship and one that I had when I was much younger. As a child, I had a lot of older gay men taking care of me. There’s a trust there. I feel like little girls and old gay men together – there’s a safety. They make a shield from all of the bad things they’ve experienced in the world. They make a home together. There are no songs about that. I don’t know if you remember, but there was a show a long time ago called Love, Sidney.

MC: Right. Originally, they didn’t state it in the show, but it was about an older gay man with a kind of surrogate family. That’s the only time I remember seeing something like that. Unfortunately, I’m of the era where a lot of the men I was around when I grew up died of AIDS. At the end of the video, there’s a regulation size panel (that I am making) that I’m going to sew on to the AIDS Quilt. It’s a great tribute and something that I think tends to get forgotten. Society moves so fast now, but we need to look back at important things like the AIDS Quilt. We have to remember that there is a whole generation of men we’ve lost and to remember to honor them.

GS: I wouldn’t ordinarily watch Wife Swap, but when I saw that you were going to be on it, I couldn’t resist. On the whole, what was that experience like for you?

MC: It was great! I love Holly Robinson Peete. I love her family. We had the best time. Her husband is fantastic. Her kids are beautiful. I really enjoyed being in that environment. I’m not often around that kind of family. I’m not around kids. I’m not around straight men [laughs]. I had a very nice time.

GS: Your television presence has also increased with your recurring appearances on Fashion Police. How do you like being a part of the Fashion Police team?

MC: I love it! I’ve become very close to all of the co-hosts. I love Brad, I love Giuliana, I love Nene, and I’m especially tight with Melissa. I’ve known her for a very long time. She’s my sister. Consistently what we do is try to honor Joan Rivers’ memory. We try to do her justice. Fashion Police was Joan’s favorite thing. It was her most prized accomplishment. She really enjoyed it. What we try to do is bring it up back to her level. There’s no way you could ever replace Joan Rivers, but we can at least try to have fun and make her proud.