Millennials have much more progressive attitudes about gender and sexuality and identity than any of us did even a decade ago. 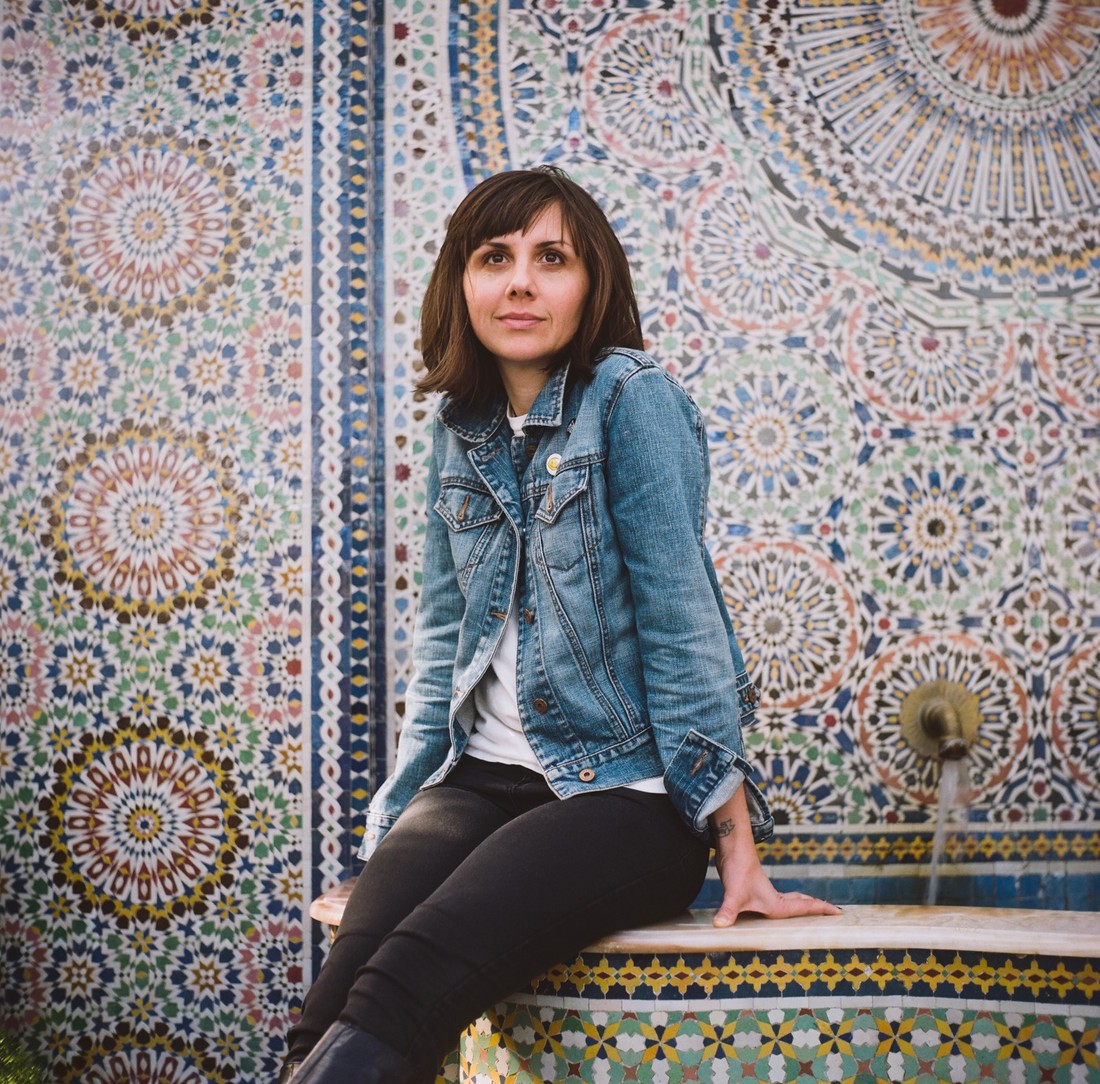 They say you shouldn’t judge a book by its cover, but sometimes the title is all you need. The First Collection of Criticism by a Living Female Rock Critic (Featherproof, 2015) by Jessica Hopper tells you everything you need to know about what’s between the covers. Separated into eight sections, the collected writings span an 11 year period, from 2003 to 2014, in Hopper’s rock criticism career. Incorporating work from publications on the national level, including Spin and Village Voice, to regional outlets such as Chicago Reader, Nashville Scene, LA Weekly and Portland Mercury, and online sites such as BuzzFeed.com, Hopper’s voice has rung out loud and clear on the topic of rock music. Her subjects in the book range from internationally known artists such as Bruce Springsteen, Lady Gaga and Rickie Lee Jones, to more independently heralded acts including M.I.A., Abe Vigoda and Mecca Normal. I spoke with Hopper about her book in fall 2015.

Gregg Shapiro: Jessica, I first encountered you when you were working as a music publicist. Did it feel like a natural progression to you to become a music journalist after working on the other side of the fence?

Jessica Hopper: I was a music writer first. I started writing about music, freelancing, when I was about 16. To me, being a publicist, which I started doing when I was 19 or 20, and I did that for about eight years full time, I was writing at the same time. Not that one financed the other or anything like that, but they were both coming from the same place of fandom and a profound interest in music and my own independence. I didn’t transition into writing full time until I obviously decided to stop being a publicist. I had to work up to that place, get my mettle up [laughs] to write full-time. I was really glad that I did. I realized after the fact that I could have done it years earlier, that people were waiting for me to not have these various [laugh] conflicts of interest, because I was writing about some of the same music scenes that I had also been participant in because of industry.

GS: In addition to writing about music, are you also musical?

JH: I’ve played in bands. But it’s not something I’ve done in the last 10 or so years. All of my energy really needed to be in writing. I had toured with bands and I had an idea of what it took [laughs] to make it by virtue of working in the music industry. I was never interested in that. I played music for about 10, 15 years, but it’s not something I do much of anymore.

GS: What musical instruments did you play?

GS: How do you feel about the quote attributed to Martin Mull – “writing about music is like dancing about architecture”?

JH: If I believed that I wouldn’t be doing it for a living.

GS: What was the first rock concert you ever attended before you became professionally involved in the music industry?

JH: Gosh, I don’t even remember. I think I started going to concerts when I was in 8th grade. The first concert that I ever bought tickets to for myself was Sinead O’Connor’s US tour that she canceled when she got pregnant.  I think it was 1989. I remember those were the first tickets I bought myself and they were five dollars. That gives you an idea of how long ago it was [laughs].

GS: In addition to the publication of your book The First Collection of Criticism by a Living Female Rock Critic, 2015 is also a time in which other women in rock, such as Grace Jones, Chrissie Hynde, Kim Gordon, Carrie Brownstein, Patti Smith, Carly Simon and Freda Love Smith, among others, published memoirs. Why do you think that such a confluence is taking place?

JH: I think part of it is that the publishing industry sometimes needs to see a precedent. That people are really interested. Carrie and Kim’s books were in the works for quite some time. I don’t know about the other ones. I think between the success of (Patti Smith’s award-winning) Just Kids and also the success of Viv Albertine’s memoir, which became a mass market success, not just a niche success, that people were definitely interested. Carly Simon had an earlier co-written biography whose author was discredited. I can see why she would want to do another book. Grace Jones has some box sets coming and it’s timely in terms of her career. I think some of it is that people are looking around going, “What other stories are there to tell?” I think some it is a larger cultural dialogue. You have to wonder, for sure, because all these things are coming fast and furious in the last six months. I hope it’s also a shifting of the cultural tide. But I think it’s also part of an interest in conversation that maybe before the huge success of Just Kids people weren’t necessarily seeing that there was a dearth of books about women’s development as musical artists.

GS: The Faith section is the centerpiece of The First Collection of Criticism by a Living Female Rock Critic. Do you consider yourself to be a religious person, and if so, is that why you felt it necessary to include this section?

JH: No, to both those things. I am a spiritual person. But I think more so that faith, in another way, is fandom. I think a lot of music has to deal with faith. I was playing both sides of that card. When I was talking about Michael Jackson, I wasn’t talking about church, I was talking about what it is to believe in something. I’m coming at it from all sides. For a lot of people, music, the same way that religion is for other people, is something they orient their lives around. When you believe in music, sometimes you believe in a lot of other things that sustain you in a similar way.

GS: What else can you tell me about the process of deciding what would be included in the book?

JH: First we culled a long list and cut that down and cut that down. Once we were getting down to pieces where we thought, “All of these have to be in the book,” you start looking at them for themes and organizing principles. That’s how that went. I knew what the overarching themes were in my work, but they become even more evident when you put it all together.

GS: You manage to hit a few queer buttons in the first essay, “Emo: Where the Girls Aren’t,” with mentions of Mr. Lady Records and Andrea Dworkin, as well as throughout the book in pieces featuring Tegan and Sara, Annie Clark (aka St. Vincent), Juan Velazquez (of Abe Vigoda), Hole drummer Patty Schemel, and “queer show collectives.” As a straight ally, what is your take on the current state of queer music?

JH: It’s as thriving as it’s ever been. I think the thing that beautifully is happening now is that hopefully that people are able to have more understanding and access and routes of entry to work by queer artists. I also think we’re in this era where sometimes labeling things marginalizes them. There are some necessary and interesting conversations that are happening about intersectionality and how we can be allies and how we fortify and create equal resources for queer, trans and non-binary musicians and artists and create safe spaces so that everyone can feel welcome.

GS: In the “California Demise” essay, you write about rapper Tyler, the Creator's "viciousness...directed towards queers and women." Do you think that kind of thing will ever change and what will it take to bring about a change?

JH: I think it is already changing. I think a lot of it is generational. Millennials have much more progressive attitudes about gender and sexuality and identity than any of us did even a decade ago. Because they’ve grown up with it, there’s less of a chasm to be bridged.

GS: You have been a journalist for many years. Do you have any interest in writing fiction; do you think you might have novel in you?

JH: No. My brain has never worked like that. I’ve never written fiction in my life. It doesn’t even occur to me. My brain is critical. That’s how my brain assembles things. When I hear things, I’m listening critically, I’m watching critically always.

GS: What can you tell me about your November 2015 departure from the music website Pitchfork?

JH: I was doing work that I really liked and enjoyed there. I had an incredible amount of opportunities that came because of the work I was doing there, but also a lot of it came from what I was doing outside of Pitchfork, and it was difficult to balance those things. I had to say no to a lot of things. Then some offers came up that I couldn’t say no to that I had to jump at. That’s what hastened me leaving Pitchfork. I knew I was going to have to leave in order to work on the book I wanted to do next. It’s really difficult to try to balance a daily editorial schedule and run a magazine. I was doing two jobs within the magazine and working on the site. It didn’t leave a lot of space in my brain or time in my life for me to do the research I needed to do on the next book. I’m working on that and I’m going to be going to another job soon, but I can’t really talk about it yet. I’m really grateful for what I got to do in the year that I was at Pitchfork. It was an incredible opportunity.

JH: Yes, the next book is both a critical and cultural and musical history. [Laughs] that’s pretty vague but I’ll be able to talk about it once I sell it.