Don't let stuff get you down is the main message 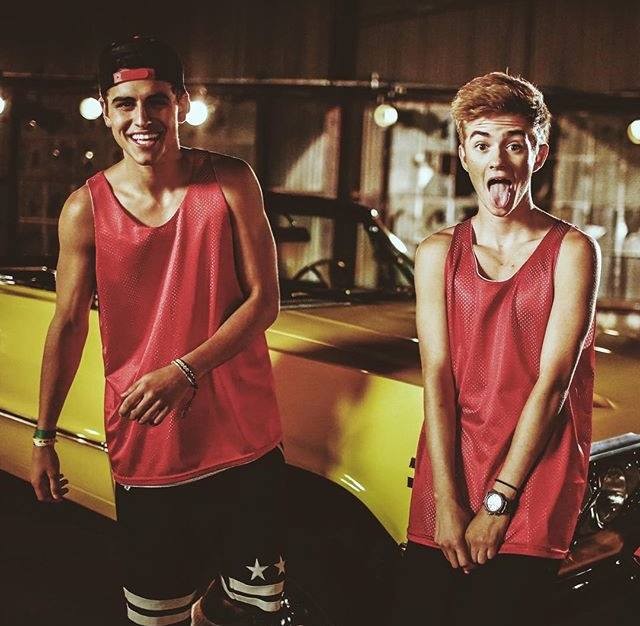 Jack and Jack went up the hill and there was no Jill in sight. The teen heartthrobs are heading to Boystown for Market Days where they are eager to introduce their new music to the crowds.

Combining comedy with rap and pop music has done well for the up-and-coming duo with their tune “Wild Life” topping the iTunes charts and the Billboard 100.

As childhood friends growing up in Omaha, the two eventually created a YouTube channel and shot to stardom with Vine videos.

This past February they released a full length album with collaborations including Emblem3, Shawn Mendes, and Steve Aoki. Last month their EP reached number one within hours of its release. They opened for Demi Lovato on her tour which recently cemented a loyal fanbase.

Nunn talked to the two this past weekend at a Dell event where hundreds of screaming girls waited outside for them.

JN: (Jerry Nunn) Start off with talking about your history together.

JG: (Jack Glinsky) We met in kindergarten when we were four and five years old.

JJ: (Jack Johnson) We have been friends ever since elementary school.

JG: Flash forward to fifth grade we started a YouTube channel together where we began our creative process.

JJ: The channel didn’t last too long but we made a lot of song parodies of popular songs at the time. It was a way for us to express ourselves creatively. We stopped doing that when high school came around. We let the pressure get to us. We then discovered an app called Vine. We started making little sketch comedy shows on there. I don’t what it was but we were captivating enough to gain millions of followers on there.

JG: I think we had a million followers within six months of starting. It was crazy for us and not something we expected at all.

JJ: It was crazy that it all happened during our senior year in high school. We were going to prom and we had all of those followers.

JG: It was balancing school and coming to events, doing shows, which brings me to the next point. About six months after Vine we started taking music seriously. We were writing it with no means of recording it in Omaha, Nebraska. We thought we needed to be in LA. These kids hit us up from our hometown who happened to be just two high school students. They knew we could sing and rap from our videos so they wanted to work together.

JJ: We made a few tracks with them. Our first four songs were made in a closet in Omaha, Nebraska. That got us to LA where we met producers that did it as an occupation not a hobby. The music quality jumped up a crazy level when we got to LA. We have been excited ever since. It has been music constantly, making videos and performing for our fans. It has been unbelievable.

JG: It has been amazing!

JN: Since living in LA now how is the family back in Nebraska?

JG: That family is good. We actually go back all of the time and are heading there tomorrow, to be with the family and my dog Libby. I miss her so much. I get to see my sister off to her first real job. She just graduated college.

JJ: We still have great family ties. We never want to be those kids that are too good for their families.

JN: I am sure it insane with the fans.

JJ: Yes, sometimes you can put yourself on a mental pedestal. You just have to remember, “Yo, I’m just a normal kid in unusual circumstances.”

JG: We were born in Omaha, Nebraska. We know how normal our lives have been up until the last couple of years.

JJ: We went to a normal high school so it is all good. We are very humble and try to stay grounded as much as possible.

JN: How did you grow such an Internet following?

JJ: I wish there were some kind of magic answer for that. There is no formula for that.

JG: I think it was the chemistry that Jack and I have with each other. That is something these young girls are susceptible to fall in love with. They see this brotherhood friendship and they say, “These guys love each other and love what they are doing. They are genuine.” We were consistent and I think the fans can tell if you are really being yourself.

JJ: It was putting effort into it and every single day posting. Naturally it happened over time.

JN: You both work very hard on this with 11 singles made already.

JJ: Yes, and we released an EP recently. We have about 15 tracks now all together.

JN: So you are putting in the work and it didn’t magically happen?

JG: Right, we didn’t just wake up one day with millions of followers.

JJ: It doesn’t feel like work though, but more of a hobby. We really love what we are doing.

JG: It isn’t just us at the same time it is our fans doing a lot of the work. They are tweeting and sending our photos around. They get things trending and get out name out there.

JJ: We are the ones that make the content but they get it out to everybody. They share it to their family and friends, to people that might not know us.

JG: As of right now we have no radio or label behind us.

JJ: So people show other people these new tracks of ours. You gotta give it up to the fans!

JN: What is the craziest thing a fan has done? Someone passed out earlier during your show today.

JJ: It was so sad. We were performing one of our songs “Groove” and we were dancing then all of a sudden we see a girl who was just blank in the face.

JG: She was pale. Everyone else was jumping around and having fun. I didn’t know what to do.

JG: It was the middle of the song so I couldn’t stop it but I wanted to help her. That was a crazy fan experience because I don’t want to see people pass out. I don’t like that.

On a different note we have had some weird interactions with fans.

JN: Tell me about your “Wild Life” instead.

JJ: That was our first song that we made when got out to LA.

JG: We wanted to make a gimmicky fun song with a drop in it. We found on Vine that a bunch of people are using drops to songs on Vine.

JJ: We wanted something really unique so we wanted to incorporate animal noises. The catch line was “getting Wild Life” worked really well. The novelty of it made it a success. That is still one of our best selling songs to date.

JN: You are playing Market Days so are you staying in Chicago until then?

JJ: We are going back to Omaha for the five days in between. We will be back to Chicago on Friday night.

JG: We are excited to be back in Chicago.

JN: Do you know about Market Days? The attendance is huge.

JG: That is incredible.

JN: You will build a gay fan base.

JJ: That is awesome.

JN: You have both been supporters of anti-bullying in the past.

JJ: A big message we preach always to our fans is to not bully anyone. You see it in every high school that you go to. There is a bullying in the hallways. Now that we are out of high school and have this huge fan base to promote a message to we want to make sure that nobody feels the need to bully or to feel that a bully can get to them. At the end of the day bullies are people that can get you down or may be jealous of you or happy with their own lives so you got to remember they are living a sad life if they are a bully. They may not have themselves together as much as they seem to.

JG: Don't let stuff get you down is the main message.

JJ: Be better than the bully.

JG: I think the reason we are so passionate about that is because not only in high school did we see it but once we started developing this fan base we see it online and on social media. We will see a girl on our timeline saying she wish she could stop cutting but it is her only way of release. We will hear that a person was mean to someone and make them feel bad.

JJ: It made us so much more aware of the situation that these girls are going through. We were lucky to have a good group of friends in high school. We were not the butt of too many jokes and very grateful of that.

JG: We would watch each other's backs.

JJ: Some people don't have that or don't have a good support system. They are very vulnerable to bullies at school. We see that all the time on Tweeter with our fans and we are an outlet for them for happiness or whatever that may be. We want to make sure and give them that message to never let a bully get to you. At the end of the day people need to keep their head up.

JG: We made a song that targeted that message called “Tides” that was a metaphor for it.

JJ: “Keep your head above the water and don't let the Tides drag you down.”

JG: Referring to the bad things in life. I think people responded great to that because they can relate to it really well.

JJ: Some girls have even gotten tattoos of the lyrics to that song on their backs. That stuff just makes you emotional. We like to preach that good message.

JN: What is next after Market Days?

JG: We are definitely going to Europe in about three months.

JJ: We spend a month in Europe and our first time over there. We are stoked.

JG: We have Europe and some other continents coming soon. We don't know exactly where we are going but we are excited. Even for next summer we are starting to talk about plans. We can't wait to get out there.

JJ: We will have new music and new content.

JG: Even some more comedy sketches, everything we have been doing just on a higher scale.