I'm always surprised and humbled by how far the show has come already. 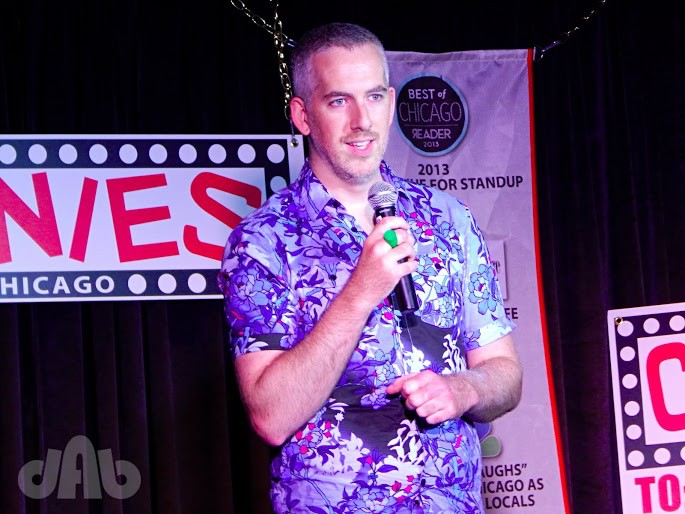 Have you ever seen a queer comedy show in Chicago? Chances are the producer for it was Adam Guerino. Called a "comedian-producer-genius" by Chicago Reader, Guerino has produced comedy in Chicago for almost a decade. This Tuesday, Guerino is hosting his baby Queer Comedy at Zanies' 4-year anniversary. Since 2011, Queer Comedy at Zanies has hosted comedian greats from Cameron Esposito to James Adomian, been named The Advocate's "9 LGBT Friendly Comedy Shows You Should Be Supporting," featured in Chicago Tribune's "Stand-up Scene," Timeout Chicago's "Critic's Pick," The Redeye's "Do" and included in Chicago Reader's "The Agenda" and "Culture Vulture" with the praise "More, please." To talk to him about the anniversary show and the years that led up to it, Aria Baci asked him a few questions.

AB: (Aria Baci) What inspired you to start a queer comedy show back in 2011?

AG: (Adam Guerino) I wanted to start the show because I believe queer comedy and comedians belong in the mainstream. I approached Zanies Comedy Club because it was the most historic stand-up comedy club in the Midwest—everyone who has come up as a comedian has come through Zanies before from Roseanne and Seinfeld to Chelsea Handler and Chris Hardwick. I thought the perfect opportunity for the show would be during gay pride so I pitched it as a one-time show, and to my surprise, Zanies wanted to do an ongoing monthly show. From the start, we've had queer and straight comedians in the show because having a "queers only" show would be just as ridiculous as a "no queers allowed" show.

AB: And at the time, this was the only such show in the city, right?

AG: There were bar shows that had a queer focus but never an ongoing stand-up show in a mainstream comedy club. I co-produced Laugh Track at Sidetrack which was a great example of the queer community being ready for comedy shows, but it wasn't until Queer Comedy at Zanies that there was an explicit home for both the queer and straight community to watch comedy. The magic is in the mix.

AB: And now there are multiple shows around town! Does that feel like progress?

AG: Absolutely. My goal was to bring attention to queer comedy with an all-inclusive show and now almost every comedy club has a similar show. When I started the show, there were a handful of queer comedians, and now there are dozens. The times have changed, and though I wouldn't say it was because of my show, I hope it helped.

AB: So the stand-up comedy scene in Chicago has been welcoming toward a queer-inclusive show?

AG: Yes and no. I've often heard from queer comedians that they wouldn't have continued with comedy if it weren't for my show and I've heard from straight comedians that it's their favorite show in the city. But while people love doing the show, I've often heard criticism that niche shows like a queer comedy one are gimmicky and not productive. Almost always that criticism comes from a comedian who has never been to the show and are under the false assumption that we don't have straight comedians. I've even been sent random messages from comedians saying they'll "make out with another dude" to be in the show, as though that's part of my booking process. But hey, though it wouldn’t hurt or help their chances, it could be fun.

AB: Psychologists have studied the way laughter encourages social bonding. Can we talk about how a queer-inclusive comedy show brings the LGBT community together with straight allies?

AG: Totally. I think the all-inclusiveness resonates with people and our audiences are straight and queer alike because of it. I usually start a show asking "Where my gays? Where my straight allies?" because I want to frame the show with community. One of the greatest compliments I hear from audience members at my show is that a comedian is the "first person" they've talked to from varying backgrounds whether it's gay, bi or trans. Of course I think, "That you know of," but it's nice to think that my show was the gateway. "Gay-tway?"

AG: Anyway, I've found you can't help but feel a kinship in a room full of people where there are so many differences and people are telling stories about their lives.

AB: I think we can agree that laughter knows no sexual orientation or gender identity, but do you think having a good sense of humor can actually make a person more attractive?

AG: I certainly find banter a must. Funny is sexy, without a doubt. Though I have a strict "no jokes during sex" policy. That being said, I'd rather someone loved me for my body than my sense of humor.

AB: Can a two-drink minimum make a person more attractive?

AB: What do you envision for the future of the show?

AG: I'm always surprised and humbled by how far the show has come already. When I pitched the show, I thought it might be a one-time event and now it's celebrating 4 years! With each year, I expanded it, either by welcoming national headliners or doing contests, but the purpose has never changed: to create all-inclusive and entertaining shows. Moving forward, I want to continue doing a queer-inclusive show that provides a home for queer and straight performers and audiences alike. We have a lot of amazing new and returning comedians booked for the next year including the hilarious comedienne and TV writer Emily Dickson on September 29th. Who else? You’ll have to keep an eye out...