Vidal and Buckley had this unique relationship with each other where it wasn’t just about the ideas of the other. It was like they saw in the other person somebody who was dangerous. 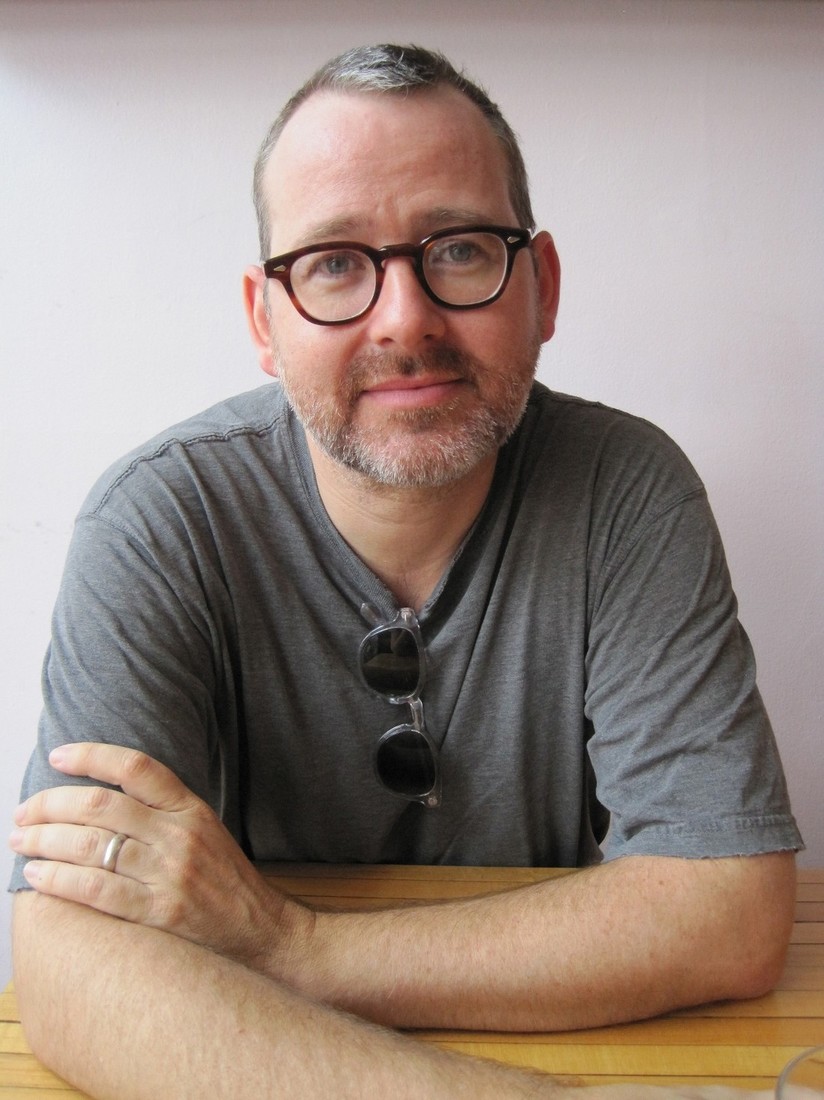 Don’t be surprised if Morgan Neville, who won an Academy Award for the 2013 documentary 20 Feet From Stardom, takes home another Oscar for his 2015 doc Best of Enemies (Magnolia/Participant). The Enemies of the title are gay journalist/novelist Gore Vidal and conservative writer/pundit William F. Buckley who, in the days long before reality TV, gave viewers both an earful and an eyeful, during their live 1968 TV debates, which aired on ABC during the Democratic and Republican conventions. What began as bitchy banter eventually escalated in to a full-on assault, both verbal and physical. Not only did the debates make the dueling duo household names, it also helped to establish the struggling network airing the debates as a force with which to be reckoned. I spoke with Morgan Neville at The Standard in Miami Beach. [Best of Enemies opens on Aug. 7 at the Landmark Century.]

Gregg Shapiro: I want to begin by congratulating you on your Oscar for 20 Feet From Stardom.

Morgan Neville: Thank you, it was pretty exciting.

GS: What does that kind of recognition mean to you as a filmmaker?

MN: What it really means? As an independent filmmaker I can make more independent films [laughs]. I’ve been doing it for 20 years. The whole film was an amazing kind of ride and it was one of those things where everything we did clicked, the stars aligned, or as all the back-up singers kept saying, “God took care of business.” They all said they were praying. I guess God came through. That project was kind of blessed. Normally stuff goes wrong. Somehow on that film nothing ever went wrong.

MN: It is kind of amazing. I know that’s not ever going to happen again in my life. It’s helpful, honestly (in terms of) finishing Best of Enemies. I was making it for three and half years and when 20 Feet (From Stardom) came out, suddenly it was like, “Oh, here’s all the money you’ll need to finish making your film.”

GS: With your new doc Best of Enemies you shift gears from the recording studio and the stage to television and the page. You were born a year before the Vidal/Buckley debates took place during the 1968 conventions, so I was wondering when you first become aware of them and their significance?

MN: Right after college I went to work at The Nation magazine. I got assigned to work as Gore Vidal’s fact-checker. I knew of Gore beforehand, of course. Then I really got to know him and his work. His work is great. Gore, himself, could be difficult. I honestly can’t remember when it was that I first heard about the debates. It was one of those things of which I was dimly aware. Before YouTube you couldn’t see anything. Only some of them are online. It was my partner Robert Gordon who had a bootleg tape. He saw the potential in it. He showed it to me and I saw the potential in it. They’re two huge titan figures.

GS: Was there anything you learned in the process that hadn’t anticipate?

MN: The thing we didn’t know about was the network news history. Someone recently told me this that back then it was really all about affiliates. CBS and NBC had like 250 affiliates. ABC only had like 180. There were a lot of secondary markets that didn’t even have ABC. They were fighting to make it. CBS and NBC also came out of established radio networks and ABC was started from scratch.

GS: What was it about the debates that inspired you to make a feature length doc about them?

MN: I started as a journalist and I love journalism. I love media studies and culture and all that kind of stuff. Instinctively, I felt like it was saying a lot about what TV has done to our democracy; civil and uncivil discourse, all of the things in which I was interested. What I didn’t realize until we got into it was how deeply it resonated. I saw the potential there and we came to see it as one of those big pivot points in TV’s history.

GS: There are many elements of the doc that still ring true today, from the police brutality at the Democratic convention in Chicago to the conservative disdain for anything gay and liberal to TV networks jockeying for position in the ratings. Did that surprise you?

MN: Even after watching the raw debates, to me it seemed very relevant. The biggest battle we fought, getting this film made, was people saying, “Is this relevant?” We kept saying, “Yes! Yes!” And now the most common comment I get after people see it is, “I can’t believe how relevant it is.”
GS: What do you think it will take for things to change in this regard, if that’s even possible?

MN: Fox and MSNBC aren’t going to go away. To me, this is what PBS should be doing. They should have a weekly debate show with people – from the left and the right -- having informed debates. Firing Line did that for decades on PBS. Buckley had fantastic people on those shows. On those shows, Buckley was consistently civil. I think he was the embodiment of civility. Christopher Hitchens and others said they would go on his show and get into verbal debate. Afterwards, they would go out for a drink or dinner. It was about the ideas. It wasn’t personal.

GS: Maybe he got all the personal stuff out of the way with Vidal.

MN: Vidal and Buckley had this unique relationship with each other where it wasn’t just about the ideas of the other. It was like they saw in the other person somebody who was dangerous. Also, because they were so similar in so many ways; I feel like they thought that the other person had a unique vision on their own insecurities. That’s why it was never civil. Someone said it was like they were frenemies. I said, “No, they’re not. There were not friends. They were just pure enemies.”

GS: What was involved in the process of selecting interview subjects including Brooke Gladstone (of NPR), (blogger) Andrew Sullivan, Lee Edwards (of The Heritage Foundation), Dick Cavett and, as you mentioned, the late Christopher Hitchens, to mention a few?

MN: We wanted to talk about a number of different things. We had to cover their biographies, the debates, political dialogue and media. We actually interviewed a dozen more people that we didn’t use in the film including Bob Scheer, Noam Chomsky and Gore himself. We interviewed some great people who aren’t in the film. Not because they didn’t say good things, but I wanted it to be very focused and not become a talking heads soup where you have lots of people popping up and saying one thing. People come back (in the film) and you can think, “Oh, now I understand where this person is coming from.”

GS: John Lithgow and Kelsey Grammer provide the voices of Vidal and Buckley, respectively, in some sequences. What was the thinking behind that?

MN: We had a hard time figuring out what to do. Do we have people imitating Vidal and Buckley’s voices? We tried some of that. Do we have women do the voices? Susan Sarandon was very close to Gore – maybe she could do him. Just thinking outside of the box. At the end of the day, we said, “Why don’t we just get somebody who has the tone of them?” We thought of John Lithgow, and Kelsey Grammer being a conservative.  They both have those mid-Atlantic accents. We didn’t tell them to imitate Vidal or Buckley and they didn’t. But they still captured an essence of it. Once you get used to it, you’re right there. And the fact that they’re great actors means that you get the drama of the words, too.

GS: One of the most shocking things about the doc is the way that it reveals the toll that the debates took on both men.

MN: I didn’t know that starting it. Nobody had ever written a book about the debates. There were only fragments in different biographies. I had hints of it. Chris Buckley wrote a book about his parents, Losing Mum and Pup, and he talks a little bit about it. After his father died, he talks about a file cabinet labeled “Vidal,” that had all the depositions from the lawsuit, and how throwing it out lifted a great weight off of him. In addition to Buckley’s brother and assistant, we interviewed a researcher and another brother who we didn’t put in the film, and they were all saying the same thing. It weighed on him.

GS: Have you started thinking about or working on your next film?

GS: Back to music again.

MN: Back to music. All of these documentaries I started years ago. I’ve been working on the Yo-Yo Ma documentary for three years. Best of Enemies was five years. It just takes time. I love music, but I love other stuff, too. Even though it’s music, it could not be more different. It’s about Yo-Yo and his using music to change world. We filmed in Jordan and Turkey and China. It’s about musical activism. That’s the thing about something like music. Through music, you can tell any type of story in any place in the world about any subject. It’s a good window into something.