We grew up with The Sound of Music legacy 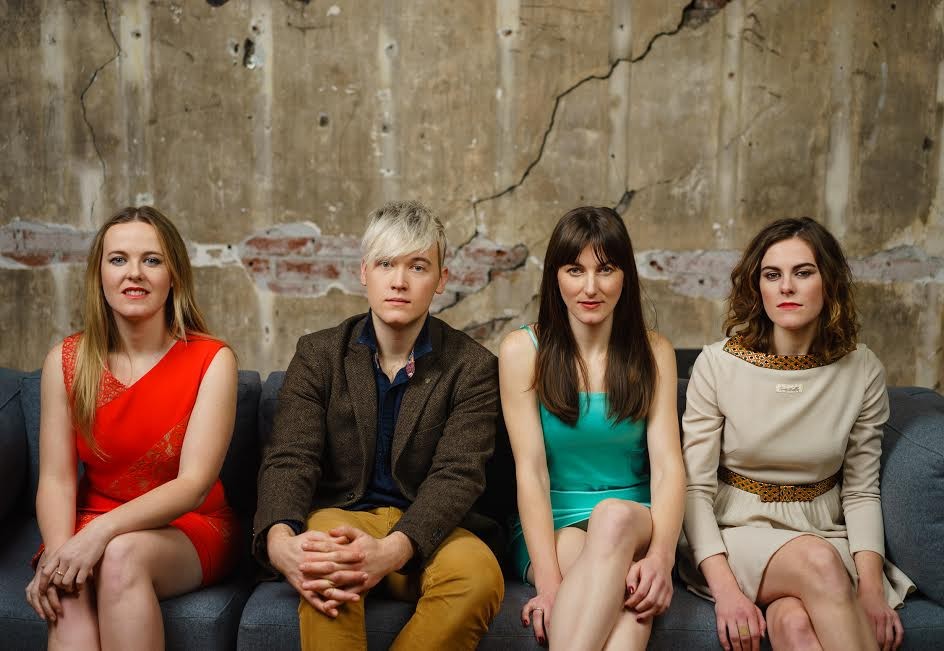 The hills are alive with The von Trapps

The next generation of the iconic family von Trapps is banding together to create a whole new sound. Siblings August, Amanda, Melanie, and Sofia are the great grandchildren of the Captain and Maria von Trapp who many know from the musical The Sound of Music.

Dancing in Gold is the first of three EPs of new material that will be released in the next two years with the first out April 14. They have worked with the group Pink Martini singing Johannes Brahms' “In Stiller Nacht” and “Edelweiss” for the album Dream a Little Dream. They have also recorded with such artists as Wayne Newton and Rufus Wainwright.

We called the lead singer August to learn more about this new group.

JN: (Jerry Nunn) Hi, August. Where in the world are you?

AvT: (August von Trapp) Portland, Oregon. We moved here after the Pink Martini album because it is a pretty awesome city. I'm enjoying the little bout of sunlight we are having.

JN: Did you live in Vermont where the many of the von Trapp family still live today?

AvT: My dad moved out of Vermont a year or two after my eldest sister was born. We grew up mostly in Montana until I was seven then we started touring. I spent most of my life on the road traveling after that.

JN: That is wild that you have been traveling and performing for over 14 years now.

AvT: It has been such a crazy adventure but it has been very amazing too.

JN: It must be in your blood.

JN: How is it traveling with your sisters?

AvT: There are lots of funny factors. Musically it is really cool because our voices started adapting into each other. We have a really special blend that is fun to perfect. Even a group that has been working together for a long time to really achieve an intense blend. It is fun for that to come naturally.

It is also working with people that I have known and have loved for so long. They know everything about me so I can't try to act cool or anything.

JN: With your new song “Dancing in Gold” was it hard to sound retro and modern at the same time?

AvT: It has been great developing that sound. I am a huge fan of a Japanese artist called Yumi Arai who changed her name to Matsutoya. Her music is like old American '60s pop on steroids. It is so over the top but so good. I wanted to influence the music with that sound. It is playful but has a sound of coming of age. There is an imperfection to it that also adds a mystique to it.

The idea was not to just sound old but to be open to a genre that is significant, at least in my mind. That is the mentality behind it.

JN: You are working on three EPs?

AvT: Yes, all sort of calling back and forth to one another. We are working with this amazing painter from the UK. We are doing a call and response thing with him where we send him the EP and asked him to translate the music into something visual basically, however he envisions it. That is what we are using as the album cover. He has an amazing sense of esthetic and form. From the picture he is going to build a new painting that engulfs the first one and we are going to write music for that. It is a multimedia experiment in a way. It involves a lot of interesting collaborations.

JN: Will the new EP coming in April be similar to the “Dancing in Gold” track?

AvT: The rest of it is pretty similar. It fills out more of that '60s vibe. We have Israel Nebeker from Blind Pilot as the producer. They are a fantastic indie back from here in Portland. He had a cool influence on all of the songs. There are times it sounds a little more rock and sometimes a little quieter. It has a Portland indie vibe to it.

Every song is different and has a lot of value. It is meant to be taken song by song not an album necessarily.

JN: Do you feel pressure living up to the von Trapp family name?

AvT: We grew up with The Sound of Music legacy where our grandparents had very traditional culture, very Austrian and straightforward. There was also the Broadway musical with a Hollywood adaptation of that.

There's the movie that is exaggerated and people make it their own. We have our grandparents who we have met and talked to. Having them as people and not actors helped us understand The Sound of Music legacy and make it human. It is a part of our lives and luckily there is not a huge disconnect from what The Sound of Music is and what it is based off of and what we are doing. We are doing our own thing and not trying to make anything live longer necessarily. We like to honor their tradition.

The reason it is cool is that people have a really strong reaction to The Sound of Music and a good memory with it generally. It is nice to remind people of that. On those terms we like to carry it on but there is no pressure to be the next Sound of Music people.

JN: I know there are so many LGBT fans of the musical that want to see this show.

AvT: Good, we are excited about it, too.

AvT: Yes, I have friends there that I have lived with for a little while so I know a bit of Chicago.

JN: What did you think of Lady Gaga performing songs from The Sound of Music at the Oscars?

AvT: I thought it was really good. It was well done and traditional, very Broadway and beautiful.

JN: How about Carrie Underwood's version?

AvT: Honestly I didn't see it but I heard all about it.

JN: Maria von Trapp, the last of the original singing children (not to be confused with the baroness) died last year at age 99. How did that affect the family?

AvT: It was a little eerie I have got to say. That was the end of that line. It was even more eerie when my Aunt Agathe (Leisl in the musical) died because there was only one person that had seen it and experienced all of those outrageous adventures after her. They were extremely close as a family so they had many memories together. To think there was only one surviving was haunting in a way.

AvT: Yes, he was portrayed as Kurt in the movie.

JN: Now I got it. On the TV series Glee, Ryan Murphy named the character Kurt because Chris Colfer reminded him of Kurt from The Sound of Music.

Traipse down to SPACE, 1245 Chicago Avenue, in Evanston, for The von Trapps on Tuesday, March 31 at 7:30 p.m. Visit evanstonspace.com or vontrapps.net for more information.