Trannika is the most extreme version of myself... There's power in that wig! 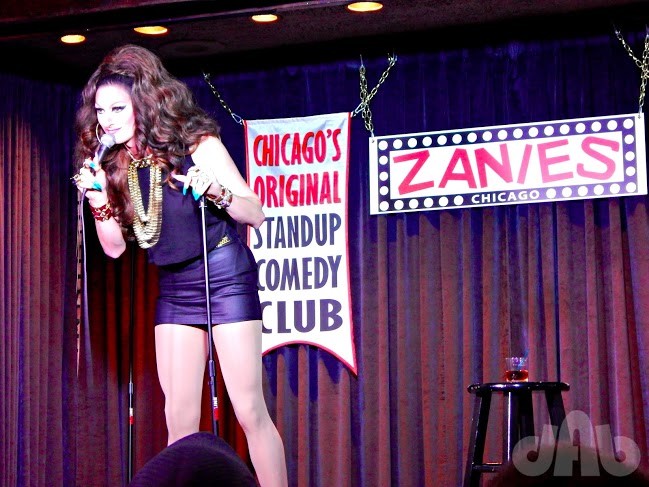 Exciting news is on the horizon for Trannika Rex. Comedian Adam Guerino caught her for an update on all things Trannika.

Trannika Rex is undoubtedly one of the hardest working queens in the country. In addition to running more shows than any other drag queen in Chicago, (Drag Matinee weekly at Berlin Nightclub and Trannika's Most Wanted monthly at Scarlet Bar,) she also guest hosts events from Milwaukee Pride Fest to Neverland Parties and Out In The Park. What sets her apart isn't just her hectic schedule but her cross-over ability, she is also the only drag queen to perform at the historic comedy club Zanies in downtown Chicago. Speaking of set apart, it doesn't hurt to be a seven foot tall drag queen if you want to stand out in a crowd. Thankfully, I ran into her in the parking lot of Dunkin Donuts on Belmont and Halsted and got to ask her some questions about being a queen and her upcoming shows.

AG: (Adam Guerino) I think a drag queen's "how you got started" story is really interesting. I mean, unlike a lot of artists, you came up with an alter ego complete with a different name and appearance. How else does a drag queen's starting story differ from an actor, writer or dancer?

TR: (Trannika Rex) I did community theater throughout school, mostly extreme character stuff. When I was cast in a part I would fill out this 5 page long questionnaire that included these obscure details to make you think deeper about being this character. "If he was a color," "his favorite food," "any scars?" Every human has details that we don't get immediately that impact every movement and that's the fun part for me as a walking character. Most drag queens don't think about character work but I have to talk on the mic more. Most of the details are just exaggerated moments from my personal life. Some of them are just funny lies.

AG: And possibly different than, "How you got started," when did you decide that this was something you wanted to do as a full time job?

TR: When I was little, my grandfather used to say that if you didn't wear your seatbelt when you drove, you had less of a chance of crashing because you had more to lose and you tried harder. That theory has 1,000 holes in it but here I am... A full time drag queen because I took a bunch of weird chances and stayed true to my beliefs.

Last year after my first time hosting Milwaukee Pride I got excited and quit my shit retail job and stopped bar tending to do drag full time. I had been doing drag two years. Scarlet and Berlin had both just committed to shows that were continuously breaking records and I just gained two sponsorships. That shit is hard to get so I figured it was my time to jump into this thing head first because it wasn't gonna happen again. I don't regret any of it. Life is rad.

AG: You started your act lip synching, right? Tell us about the process to become more of a host and not a traditional drag queen?

TR: I can honestly say I regret every lip sync I've ever performed. When I joined the cast of the now defunct House of Santana three years ago at Berlin, I knew I wanted to host but it wasn't an option. Performing was basically a requirement for me to get there eventually and I saw it as a task. It still makes my knees quiver. One night I was asked by Miztress Vana to help host and everything just kind of fell into place... it was meant to be. Each show after that show was an exercise in making excuses as to why I couldn't perform... I slowly peeled back from performances until I hosted the whole show. And here we are today.

AG: You've brought your comedy style to Zanies Comedy Club, were you nervous to see how your comedy translated to standup comedy?

TR: I didn't get nervous per se but there was definitely the question of "are straight people gonna get it?" My act already had a great reception and a hearty following so I just had to find a way to stick to what I knew. There's audience involvement because so much of my act involves reacting, so that's different for stand-up. I would have been an idiot to stand up there the first time and try to sell canned jokes they would expect from a drag queen about my tuck or wig shopping or some bullshit. Drag is my sight gag but it isn't the focus. I'd rather tell a story about shitting my pants or dare an audience member to lick a smashed Butterfinger off the stage in exchange for a shot of Fireball (true story... Great work, Luke!) That's stuff that anyone can laugh at whether they would like to admit it or not. It's more simple than it seems.

AG: One of your signature moves is to tease the audience as well as fellow performers, is this part of the act or do you find yourself giving people a hard time in day to day life?

TR: I enjoy conversational chess. It's more extreme on stage because they paid to see it. Trannika is the most extreme version of myself... These are things I would only otherwise say to my best friends who know my sense of humor. There's power in that wig!

AG: Well, Trannika, to try and understand the brains in that wig, let's try some word association and get to the root of it.

TR: Crying on Christmas morning in a sea of dollar store wrapping paper comforted only by the relaxing sound of eight barking Rottweilers under an overpass.

AG: Mango? I'm sorry, I think I might just be hungry. Anyway, you've got a big act and a big secret act coming up August 9th. Is it a coincidence that the shows get bigger during Market Days?

TR: These crocs don't pay for themselves!

AG: Tell us about The Princess?

TR: The Princess is one of my best friends. She's an incredible performer with amazing hand-made costumes and incredible stage presence. I book that girl any chance I get because she makes me laugh, she's easy to work with, and the audience goes nuts for her. Also: she's the only one who can drink as much Fireball as me.

AG: And what can you tell us about the secret act? This better not be some invisible drag queen no one can see lip synching but you, girl.

TR: She is legitimately famous in the drag world. She has been to Berlin before. She has never been on Drag Race. She was born a man. She's real fucking good. YOLO.

AG: Burger? Nevermind, I got to get some food. What other shows do you have coming up that you think people should go see?

Trannika's Most Wanted: Five Lady Cabaret is Monday, August 18th at Scarlet featuring our newly expanded cast of Kim Chi, Shea Coulee, Valentine, and Kahmora Hall. We're presented by Fireball Whiskey so bring your drinkin' bib! Out in the Park 6 Flags: Chicago, September 13 with Lady Bunny and Traver Rains and St. Louis, September 27 with Raja. Every Friday night at Scarlet for #ridikulous!