From Breaking Bad to Fargo: a chat with Bob Odenkirk 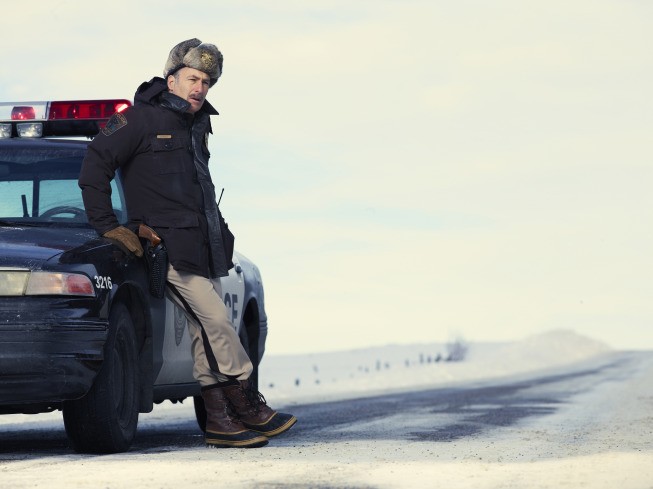 Breaking Bad fans have a real treat on their hands with the new television show Fargo based on the movie. Bob Odenkirk who played Saul Goodman in the Bad series now gives audiences quirky Deputy Bill Olson in Fargo.

The actor has strong roots in our neck of the woods being born in Berwyn, Illinois, and raised in Naperville. He left the suburbs to write on Saturday Night Live among other television shows. He eventually landed the role on Breaking Bad that made him famous and even spawned a spinoff called Better Call Saul that is set to debut in November.

We talked a bit about his new endeavors last week.

JN: (Jerry Nunn) Hi, Bob. Guess what? I was an extra in a film you directed called Let's Go To Prison.

BO: (Bob Odenkirk) You're a good guy. Thanks for doing that. How is everything going?

JN: It's going great up here. You have to come back to Illinois soon.

BO: I will be back in a few weeks. My mother still lives there so I will be visiting her.

JN: You have been in several projects in the Midwest. Is being from Illinois what drives you towards them?

BO: The writing is what draws me to them. I do think I probably relate to the stories being told in those projects and to the people being presented in those stories, so yes, you're right. These are Midwestern stories and Midwestern people and I relate to them. I always feel like I don't know what Vince Gilligan is going to decide on this new show, but I always felt Saul was from Chicago originally. Of course I sound like a Chicagoan so that probably forces his hand. I relate to those people and I'm one of those people and that's probably why I'm attracted to these projects.

JN: How was the weather in Calgary where you shot Fargo?

BO: Being from Chicago, I laughed at the cold wind. I've been in Los Angeles for over 20 years, so it was the usual acclimation process of two or three days. People live here why again? Do they know LA exists? I also experienced it a lot as a kid, until I was 25 I lived in Illinois and in Chicago mostly. Calgary is cold, for sure, but it's sunny most days, which Chicago can go a week and a half, two weeks without sun. That's a bummer.

JN: How was shooting Fargo different or similar to Breaking Bad?

BO: The similarities were these are amazing casts of people who are completely professional and grateful to be working in this area. I know I've been lucky. I know that this isn't the norm, so I got to be real careful not to get deluded by these wonderful experiences that I've had in the last two years, or four or five years if you include Breaking Bad and Nebraska and Spectacular Now and now Fargo. Most of the casts including Fargo are veterans. They really know to appreciate good writing because they've seen not so good writing.

So when they're on a project with a great original voice and integrity to the work, they are thankful and you see it and you feel it all the time every day. It's like they show up every day glad to be in something that has quality. I think I've been very lucky, but I got to keep that in mind, not get deluded and think and forget that this is just a special case for these great, great projects.

JN: What attracted you to the part on Fargo in the first place?

BO: I love the movie. I got the script and my first instinct on it was, "Please don't ruin the movie I loved," and I would say by about page eight or nine of reading of the script, I felt, "Oh man, this is great." This is everything good. They took all the great vibe from the movie. They took the darkness and the comedy. Noah Hawley is the writer and he did all this work. He took what you can take and not take the specifics of the movie. I could just tell it was very entertaining, so I wanted to go in on it and I just worked on my part and went in and I read for it, hoped that I would get it and I did.

I was just surprised at how it grew over time as we were shooting it and how my part as Bill Oswalt, without giving away too many spoilers, he gets to go somewhere emotionally and it's pretty great.

JN: What do you think about the violence on Fargo?

BO: I think the signal is sent to the viewer that this is a performance. This is a story that you're being told and you're not forced to wallow in sort of up close darkness. It's allowed to be a story point and oftentimes I think a darkly funny one and that comes from the Coen Bros., that tone. It's a little bit of a distance, honestly, on the violence

It's not asking you to feel the pain. It's more like you watch it as a story point and it's gruesome and it shocks you, but it makes you laugh.

JN: Has the show changed your view about law enforcement?

BO: I don't think it's changed much. My godfather was a Chicago policeman and I've always looked at law enforcement as an interesting and challenging job. There are so many decisions that law enforcement officers have to make and the situation changes so much from moment to moment and day to day. I have a lot of respect for officers and what they go through.

JN: Since you are in between playing Saul again, was this role refreshing?

BO: One of the reasons I was interested in it truly was how different he is from Saul. This guy is defiant, innocent and he's fighting like hell to hang on to his innocence about the people around him. Saul is cynical and clever and he's ahead of everyone. Having played Saul I was eager to play something like this and this is a great part for that reason.

JN: How was learning the accent?

BO: I will just say I hope I did a good job. Everyone in the whole cast from the get go was extremely thoughtful about trying to do a good job with our accents. One of the things we all agreed and we had two different voice coaches, one was on set. One of the things you notice if you watch videos on YouTube of the Minnesota accent is that it fluctuates. It comes and goes. It's not strong all the time and it's like it can be very strong on some words and then it can kind of be gone completely on other words. It's tough to get it right, but I think what we all tried to do is to not push it too hard.

As far as doing the accent, I'm from Naperville, Illinois and I spent a lot of time in Wisconsin as a kid because I was in Boy Scouts and I would go there pretty much once a month.

JN: You have done some wonderful writing in the past. Were you tempted to go in the writer's room with this project?

BO: It started with Breaking Bad, was getting a script and not attempting to manipulate the words at all. My challenge with Breaking Bad and with Fargo was how do I do this part as written literally word for word and how do I make those words come to life and be a character? I really take them apart so I approach these shows purely as an actor and it's been refreshing and a new way to look at acting. I think it's allowed me to be a much better actor than I was when I was constantly messing around with the words because I was either the writer on the project or I felt like it was my job.

JN: What other projects do you have coming out?

BO: I have a book coming out in October, pieces that I wrote and when I'm doing Fargo, I was able to do these other projects, Birthday Boys and stuff.

JN: Congrats on the success of Fargo and your spin off from Breaking Bad.

Fargo airs every Tuesday on FX.