It’s nice to have a piece that is connecting in that way and people want to see it. It’s selling! 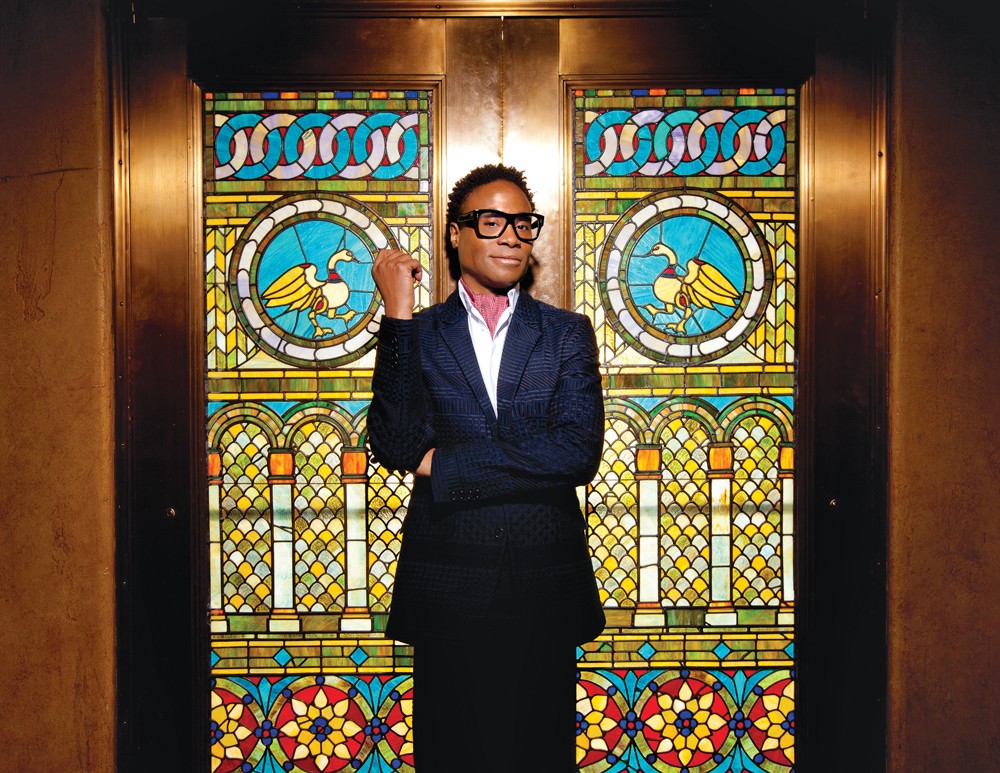 Billy Porter is a true hyphenate. He's a singer. He's a dancer (in high-heeled, thigh-high boots, no less). He's an actor. He's a songwriter. He's a playwright. Is there anything he can't do? Did I mention that he dances, nightly on Broadway, in high-heeled, thigh-high boots? Porter, who won a Tony (and several other awards) for his portrayal of Lola in the acclaimed stage musical adaptation of the British film Kinky Boots, has just put out his first new studio album, Billy's Back on Broadway (Concord) in almost 10 years. On it, Porter revisits the Broadway songbook, old and new, and comes up with refreshing and appealing interpretations of legendary show tunes. I spoke with Billy about the disc, Kinky Boots and more during the spring of 2014.

GS: (Gregg Shapiro) Billy, I want to begin by congratulating you on winning the Tony and Drama Desk for your portrayal of Lola in Kinky Boots.

BP: (Billy Porter) And Outer Critics Circle and Grammy [laughs]! I don't think a lot of people know that the rules for Grammys changed a few years ago. The show that wins the Grammy – the leads in the show actually get a Grammy (too).

GS: Do you have a place of honor for all your awards?

BP: I'm working on it. I just got an apartment. I actually didn't just get it – I've been here for a year. But I've been a little busy [laughs]. I'm finally designing it and painting it and getting furniture and hanging things on walls; doing that kind of stuff. I have a designer who is helping me out. There will be a place for them. Right now the Tony is just sitting on a decorative tray under my television. I don't even have the Grammy yet.

GS: Kinky Boots recently celebrated a year on Broadway. What does that mean to you?

BP: It's such a landmark. It's like catching lightning in a bottle. I've been in this business for more than 20 years, dare I say. I know what it's like to be a part of things that are exceptional and nobody cares. It's very rare that you get to be a part of something that is so good, so wonderful and connects. Ultimately, at a certain point, everybody wants to connect. Everybody wants that thing that connects. You can work and work your whole life…one of my mentors, George Wolfe, always said to me, "You have to practice your art, even when no one's listening. That's right and that's good and you learn how to do that and you build your creative muscles that way. Ultimately, you still want it to connect [laughs]. You still want to pay your bills and eat. It's nice to have a piece that is connecting in that way and people want to see it. It's selling! I'm not in debt any more [laughs].

GS: Speaking of Kinky Boots, you include "I'm Not My Father's Son" on your new album Billy's Back on Broadway. Why did you choose that specific song from the show?

BP: A lot of reasons. First of all, the songs (on the CD) are about hope, encouragement and empowerment. That's the theme that I chose for my record. The songs in Kinky Boots all fit into that. One of the things that I love about "Not My Father's Son" is that it's the first song that I learned from the show. I did a reading of it way, way back a couple of years ago. One of the things that I'm attuned to is when you have larger than life characters like Lola; it's very easy for those characters to get lost in the fantastical. I remember watching the movie and loving Chiwetel Ejiofor and the spirit, the story and the heart of it. When they said that they were going to do a musical of it, my hope was that they would understand the depth of the story and this character. Sometimes it doesn't translate. I was a little nervous at first. I don't want to have Lola/Simon be written as a caricature or a clown, something that as an artist I have to be climbing uphill to justify.

GS: But didn't you feel safe in Harvey's (Fierstein) hands?

BP: In Harvey and Cyndi's (Lauper) hands. When I walked into the room and that was the first song that they played, I knew from that moment everything was going to be okay.

GS: I'm so glad you mentioned Cyndi because she joins you for a duet on "Happy Days Are Here Again/Get Happy," a duet made famous by Barbra Streisand and Judy Garland. Why was that medley chosen for you and Cyn?

BP: I always choose material that means something to me. I've stopped singing songs just because I like them years ago. There has to be a reason. I have to understand the why. When Cyndi agreed to a duet with me on the album, I went in search of something that could represent our relationship and honor her presence in my life. That was the only thing that came to mind. There was never anything else. Maybe in other people's minds there was something else, but in my mind that was the only thing. For those of us who have the historical precedent, we understand that Judy Garland was introducing Barbra Streisand to the world; A mentor/mentee configuration on The Judy Garland Show with this song. I feel like that is what has happened (to me). She (Cyndi) has taken me under her wing and she has presented me to the world. I'm so thankful for that. I wanted to honor that.

GS: While we're on the subject of songs made famous by others, you also do a cover of "I've Gotta Be Me," a song closely associated with the late Sammy Davis Jr. Why did you select that song?

BP: When I was thinking about how I wanted to expand my recording artist presence, I thought long and hard about who came before me that could be a template for who I am, what I represent. The closest person for me was Sammy Davis. In his day, he was the kind of person who transcended race, genre, that glass ceiling that existed for him. There's a glass ceiling that exists for me. He existed in all worlds, whether it was pop, classic standards, film, television, Broadway. He was a true renaissance man. I wanted to try to align myself with that energy, because that's what I feel I am.

GS: You close Billy's Back on Broadway with "I Am Changing" and you also performed "And I'm Telling You I'm Not Going" on your 2005 live album At The Corner of Broadway + Soul. What can you tell me about your relationship with Dreamgirls?

BP: I was in the 6th grade when I did my first musical at Reizenstein Middle School in Pittsburgh, Pennsylvania. I was mesmerized by the form. We did a production of Babes In Arms. So you can image an 11 year old, coming from the Pentecostal church only ever singing gospel music and the music I sang in choir. I didn't have a whole lot of range. I did my first musical and I enjoyed myself. It was a great after school activity. It never occurred to me that it was a profession. More importantly, it never occurred to me as a black gospel singer that it could be a profession. The type of music that I was singing in Babes In Arms was not commensurate with the type of music I sang in church. I didn't know that I could make a living doing that. We did Babes In Arms in April or May. The second Sunday in June, I'm washing dishes in my kitchen and the Tony Awards come on (TV). I have no idea what it is. But I see all of these people singing and dancing on stage, and I'm like, "I just did a version of that. This is a thing; a profession! People can make a living doing this. Then, bam, they announce Dreamgirls and Jennifer Holiday. Here are people who look like me, dressed in sparkly outfits and suits and amazingly beautiful. There's Jennifer Holiday singing like I sing. She's on the stage, making a living and winning this award. [Laughs] I can do that! That's the significance of that show for me. It fully changed my life.

GS: You wrote several of the songs on At The Corner of Broadway + Soul. Are you still writing songs, and if so, do you have plans to record any of them?

BP: Oh, yes! I am writing. I'm writing a lot. I actually wrote a play about my family that is being produced this fall by Primary Stages off-Broadway starring S. Epatha Merkerson. I am writing music. Because the music industry is in flux right now, it's very difficult for artists with new material to break through. What I'm trying to do – and we'll see if it works – is re-enter the market with songs that everybody knows so that people will pay attention to me again. My goal is to sell a million records by year's end; through social media, through my connections, through Kinky Boots. That's my goal. Sell, sell, sell. It's hard to get people to buy music anymore, but people do respond to things that are familiar. It makes them feel warm and fuzzy all over.