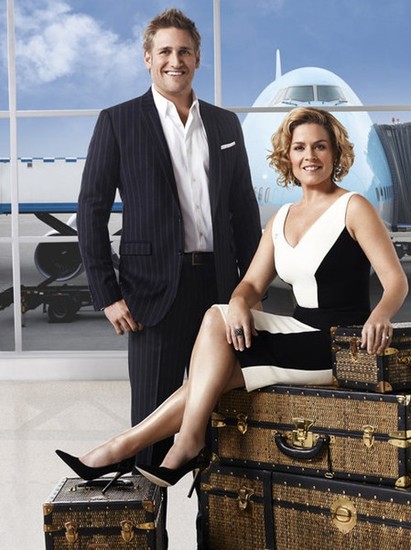 Food experts Curtis Stone and Cat Cora have a new recipe cooking for a weekly series on Bravo television entitled Around The World In 80 Plates. Twelve chefs will compete on the show in two groups as they travel around the world running local restaurants. The losing team has to vote off a teammate, stirring up drama in the process.

Stone is not only a chef but a best-selling author and television personality, leading him now to be a permanent advisor on the hit show The Biggest Loser. He took over for the third season as host on Bravo's Top Chef Masters and will do it again this year.

Out and proud lesbian chef Cora made television history by being the first and only female to land on Iron Chef America. She has authored three top-selling cookbooks and raises four sons with her partner, Jennifer.

They talked about the show that mixes Top Chef, Survivor and The Amazing Race all together to make a new dish for television viewers.

Q: (Windy City Times) I just watched the first episode and I was hoping you both could talk about the Chicago contestants John Vermiglio and Gary Walker, who I just spoke with yesterday.

A: (Curtis Stone) Well, you might have lost one of your locals there because when I saw Gary just the other day at the press tour he had mentioned he was thinking about a move out to L.A.

Q: I know; he told me he just moved there.

A: (Curtis) Gary might be jumping around. But, look: John worked with [chef] Art Smith for a long time there and, you know, Art's a dear friend of both Cat's and mine and an incredible cook. When you have somebody that comes from such a staple of that beautiful comfort food that Art's known for—and Chicago's such a great foodie city, too—you're sort of immersed in that culture. They were really strong contestants, both Gary and John. They're a lot of fun, too.

(Cat Cora) Oh, yeah. Both of them were great and so different in so many ways. Just in the fact that Gary has this just incredible personality and can speak all of these languages and I think to me and Curtis, you might agree, just one of the sweetest of the contestants on the whole show. John is very talented, very strategic, has a really good mind for this kind of competition. Both were just a joy to work with and really, really fun to watch.

(Curtis) Yeah, they sure were. A great example of the diversity of talent that we have on the show because Gary, you know, his last job I think was working at a sorority house. He's the first to say that he doesn't have the chops of some of the other chefs in terms of their culinary expertise. But as Cat mentioned, he speaks four or five languages and he's traveled the world and extremely street smart. He can get by on his smile.

We saw great skills come from Gary, but John is a self-proclaimed Midwestern boy who hasn't done a whole lot of travel, doesn't know much outside of America but is a really good cook and comes from a really great background of chefs. It's really fascinating to watch these episodes unfold, through the drama that the contestants have to live with within their own family, constantly voting each other off and then being put into a team with someone that they were just fighting with the day before and having to work all that out. [There's] also the fun just of being in different parts of the world.

Q: Curtis, can you talk about how chefs worked with certain ingredients?

A: (Curtis) Do you know what? When I'm asked to develop recipes, which we do on a daily basis, it's almost so much easier for us when someone says, "We want you to do a recipe with sea bass." Your mind goes straight away to sea bass and you start playing. I actually found it really interesting watching the contestants be told [what to use].

Q: With different levels of chefs, what was a big challenge with them adapting to different cultures?

A: (Cat) Well, I mean I definitely think they did come with so many varied ranges of skill and I think it was really just really trying to figure out who was going to lead.

There were language barriers in a lot of countries. There were a few that could speak multiple languages, although some of the street-smart chefs had skills to get through the cities a little quicker.

Q: Did you have a favorite destination on the trip?

A: (Cat) That's a hard one. I'm in love with Thai people and the food from Thailand. I've said that over and over, although Morocco was pretty amazing as well.

(Curtis) I loved Buenos Aires for the culture and the way they cook. These guys cook on grill pits for their entire life and are so skilled.

Q: Cat, you are married and have four kids. How do you find time to travel and make a show?

A: (Cat) Well, you just have to come to agreement with your partner. This is a really great opportunity and we decided together that it was worth taking it on for us for our future.

Around The World In 80 Plates runs every Wednesday on Bravo. Visit www.bravotv.com for more information.

Also in the Windy City Times: