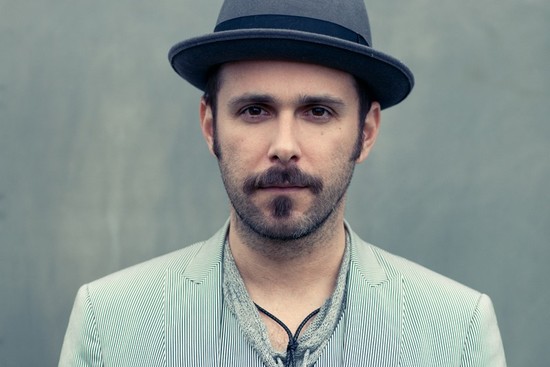 An interview with singer/songwriter Greg Laswell

On his solid new disc "Landline" (Vanguard), singer/songwriter Greg Laswell comes through loud and clear over the course of 11 songs. Utilizing a stellar cast of guest musicians, including wife Ingrid Michaelson (on the gorgeous title cut), queer powerhouse Sia (on the irresistible "Dragging You Around"), Sara Bareilles (on the forceful opener "Come Back Down") and Elizabeth and the Catapult's Elizabeth Ziman (on the heartbreaking "Back To You"), Laswell comes calling with the most ambitious album of his career. Also worth mentioning are "Late Arriving" and the rhythmic "Nicely Played." I spoke with Laswell in early 2012.

GS: (Gregg Shapiro) Four of the songs on your new album "Landline" are duets – "Come Back Down" with Sara Bareilles, "Back To You" with Elizabeth Ziman, "Dragging You Around" with Sia (Furler) and the title track with your wife Ingrid Michaelson. Were those four songs written specifically as duets or did they develop into them?

GL: (Greg Laswell) The only one that started out as a duet was the one with Ingrid. That's the only song that was co-written on the album. We were in Maine together. We wrote that song and then recorded it the next day. Elizabeth's song, for instance, I did the first verse and the chorus and it was done in my head. I was going to put out a little one minute-long song. Then I showed it to my manager and she said, "This song is really pretty, you should figure out a way to make it longer." I really didn't have anything else to say in the song and then I had the idea of writing another verse from the perspective of a girl or another person on the other end of it, giving it a little more depth. So I wrote that verse, she came in and did that after the fact. With Sia, we kind of shopped around for a little bit, because I knew I wanted her on the record. I sent her a few songs, one of which didn't even end up on the record. I sent her "Dragging You Around" and she wrote back immediately and said, "This is the one I want to sing on." With Sara, the song was done and I asked her to sing on it. She ended up forcing me back into the studio to record my vocals because my kind of easy-going vocal take sounded a little silly next to her effortless, energetic [laughs]… I got the track back from her and listen to it and thought, "Oh God, I've got to redo my part."

GS: I'm glad that you mentioned that song, "Come Back Down," because it gets the album off to a stomping start. It's a refreshing take on the anti-drug/anti-self-destruction anthem. Was there one person in particular that you had in mind when you wrote this or was it meant to be more universal?

GL: If I'm quite honest, I wrote it to myself [laughs]. Not to my present self, but to a former version of myself. It was one of the first songs that I wrote for the record, kind of laying to rest a lot of things that were going on in my life. The entire song isn't about that, but that's definitely how it started and then I took it from there.

GS: The theme appears to continue on "I Might Drop By" and "Another Life to Lose." Was this album a catharsis for you?

GL: Of any of my albums, it's the most pivotal, as far as where I am at personally. I've done quite a bit of changing over the last three or four years. I didn't really know how to make my music match. So I'd gotten pretty good at writing heartbreak songs. Not only could I not do it anymore, but I just gotten so tired of it. I've gotten kind of universally ashamed of singer songwriters who are always writing sad songs. I felt like I owed it to myself to try to put something new out into the world with a positive spin on it.

GS: "I Might Drop By," like "Do What I Can," has a Coldplay quality to it. Would it be fair to say that you count Coldplay as an influence on your work?

GL: It's funny, because I don't own any Coldplay. I'm not one of those people who doesn't like Coldplay. I think if someone says that they're not being very honest; because it's pretty hard to dislike a song by them. But I'm not necessarily a fan. I feel like when I wrote that song I took more from early Tori Amos. I've gotten that (Coldplay comparison) off and on, and I certainly don't shy away from it.

GS: Songs such as the dance-floor friendly "Nicely Played" and "Dragging You Around," your duet with queer diva Sia, could potentially increase your visibility in the LGBT community. Are you aware of a following among the gays?

GL: Yes, actually. Quite a bit of the gay community comes out to my shows. I usually go out after my shows and they'll come up to me and buy CDs or I'll sign something. More than I ever would've imagined. It's pretty cool. Probably one of the best compliments I've ever gotten was from this young man who had just recently come out to his parents. His parents had been pretty religious during his upbringing and I had written a song about coming through a hard time called "Comes and Goes in Waves" on my previous record. He came up and found me after the show and said that he knew was going to be difficult to come out, but it turned out to be even more difficult than he ever imagined and his life had been pretty much turned upside down. He was really having a rough go of things. He said that he put the song on repeat almost every day. It reminded me of why I started doing this. The root goal of this is really just communication with other human beings and struggles and getting over things and hurting when it's time to hurt but then also getting better and all that sort of thing. It gave me a new perspective and it came at the right time because I was starting to get a little cynical about the business and all that. He ended up helping me more than I probably helped him.

GS: That's a great story. New Year's Eve finally gets its own lovely and romantic song in your "New Year's Eves." Would it mean something to you if, it became something of a standard, in the tradition of the winter holiday song?

GL: [Laughs] I hadn't thought about that. Yeah, that would be awesome. I actually wrote it during the holidays, so it's very timely. I was actually struggling with the lyrics to the last verse and I got to the end of the song and I thought, "Screw it, it's almost New Year's, so I'll just leave it."

GS: At a time when most people only have mobile phones, the title track reminds listeners of the value of the old fashioned home phone and landline. Do you still have a landline?

GL: I don't! My parents just got rid of theirs. I took it hard. I was like, "Wait a minute, I don't have a home phone anymore? 826-2704 is gone [laughs]." But no I don't. The story behind that is that we were staying at my wife's parents' house in Maine when we were writing that song and cell phone service up there is just terrible. We were using a landline pretty much the whole time we were there. That's where that came from.

GS: What would you do if AT&T came to you about using the song for one of its ad campaigns?

GL: [Laughs] To boost up business of their land lines? Why not? I feel like landlines were a romantic time that we will miss but we don't realize it yet.

GS: The music world has suffered a number of significant losses since the beginning of the year, including Etta James, Soul Train's Don Cornelius, Whitney Houston and Davy Jones. Did the passing of any of those people have more of an impact on you than the others?

GL: They all have. I remember being really young when I watched the monkeys. My parents would sit me in front of the TV to watch that. And they were a huge influence on the Beatles as you know [big laugh]. There are pictures of me in my backyard playing the rake like it's a guitar. From an early age it was ingrained in me to do this sort of thing. I remember being in college, girls playing me Whitney Houston songs on our dates. You don't really realize how much of a part they play in your life until they're gone. That's when it becomes quite alarming.

GS: What can you tell me about your upcoming tour?

GL: We are starting on the East Coast and looping the whole country. It will be the biggest band I've ever toward with; I'm taking six people out with me. We're going to have a cello player. And then Elizabeth (Ziman) will be opening the show and then she'll also be playing the piano and singing all the girl parts during my show. We can have all the ladies' parts covered. You won't have to listen to my falsetto voice. I'll go back and forth between guitar and piano. In years past, I've made these big records, because I do them myself and I don't know when to stop adding tracks. But when it comes time to prepare for a live show, I have to pick and choose which parts are going to get played and this time around we'll have enough people on stage to reproduce the sound of the record.