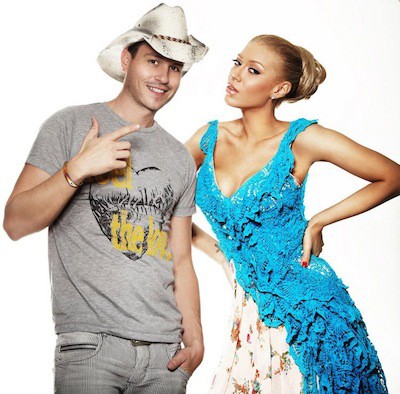 Waymon Hudson talks to Kaya Jones and Traver Rain before a special fundraiser on Sunday, Dec. 4

On Sunday December 4th, Lakeview sister establishments Taverna 750 and Scarlet Bar Chicago will celebrate their four year anniversary with a star-studded, day-long fundraiser sponsored by Belvedere (RED). Using their anniversary as a way to raise funds and awareness for their charities of choice, proceeds will benefit Project (Red) and TPAN in honor of World AIDS week, as well as the Trevor Project.

I recently had the chance to talk with Kaya Jones and Traver Rains about their role in the event, as well as the importance of using their public platform to talk about issues that matter to them.

Waymon: What made you decide to come to Chicago for your upcoming World Aids Week benefit at Scarlet and Taverna 750?

A: (Traver) I worked with Scarlet and underground on previous occasions and love the vibe they promote. I've also always loved Chicago and how it's always an adventure to visit. So when they approached me to come back to the city for such a great group of causes, I was happy to say yes!

A: (Kaya) I've actually never been involved in this project, but I work a lot with GLAAD here in LA and am doing the Equality Tour to promote marriage equality and LGBT issues, so I've always been passionate about these causes. I've also always been very fond of Traver's work, both in fashion and in the community, so I was excited to get involved with the upcoming event.

Waymon: Do you feel a special kinship with the LGBT community- both of you seem to have a bit of an irreverent, some would say queer, bent to your work (with songs like Kaya's ‘Boyfriend' about having a boyfriend who also has a boyfriend and boundary pushing fashion like Traver's work at Heatherette and T-Rains). Does that factor in to the connection you feel to the community and why you like to get involved in awareness-raising events like this celebration?

A: (Traver) My connection is pretty obvious. I've been openly gay for a dozen years now and know that it can always be an ongoing struggle in life. It's part of my life and who I am. So whenever I can and I believe in the cause, I do everything I can to give back and show support for something I'm very connected to on a daily basis.

(Kaya) I am very personally connected as well due to my out friends, business team, and family members. I've watched the struggle for equality for years, and these are human rights issues. The Equality Movement and the LGBT community are near and dear to my heart. Brave men and women fight and die for our country, to protect the rights we are supposed to be guaranteed, so speaking out for equality and civil rights is something that I feel I have to do. Artistically, songs like ‘Boyfriend' are a perfect fit for me.

It had been shopped around to other artists, who were nervous about it and it's content. But as soon as I heard it, the song made sense to me. It reminded me about my high school friend who had a boyfriend- and the three of us would walk around holding hands and spending time together. And that was really special. ‘Boyfriend' is a good interpretation of that for me.

Waymon: Your benefit & visit coincide with World AIDS Week and proceeds are going to local organization TPAN, as well as national organizations like Project(Red) and the Trevor Project. Do you feel that using your fame and time in the public eye as a platform to raise awareness is an important part of who you are as artists?

A: (Kaya) I think when you have a platform as an artists, it is important to use it. People in the arts have a responsibility, especially speaking for those who can't. That's what being an artist is all about- you can speak out for your fans and reach other people in ways that will hopefully educate and change minds. Being in the public eye is a great opportunity to really work and push the causes and issues that matter to you.

(Traver) Absolutely- having a public platform and using it for the causes you care about is a important responsibility as an artist. And we couldn't do it without the backing of great places like Scarlet and Underground for giving us a venue, as well as Belvedere for sponsoring the event. Giving back is so important, and having the support of an amazing group of people and organizations like we have allows us to talk about the issues we care about.

Waymon: Kaya, you are doing a National Equality Tour. What gave you the idea and what do you hope to accomplish?

A: (Kaya) The idea came from collaboration with my team while talking about some ways to help the LGBT community. I really felt the need to do something after my tour around the world. I did a 15-day China tour and did a free performance in a gay club there, as well as performed at the only gay club in Dubai, which was underground and really secretive. It really made me realize how much work still needs to be done around the world when it comes to gay rights and visibility. It became really important to me to not just do my regular shows, but also do something special for the LGBT community. By bringing attention to equality issues, I can hopefully help young people in different cities know that they aren't different and they aren't alone. That's what makes it so important to get involved as much as I can. Hopefully I can lend my support and increase awareness, not just to those in the community, but those with stigmas against LGBT people as well. Being an ally, especially as someone who isn't gay speaking out about LGBT rights and how much equality means to ALL of us, is important.

Waymon: Traver, you've released two shirts now to benefit the Trevor Project, as well as hosted events benefiting them. What got you interested in the work Trevor Project does and why does it hold a special place in your heart?

A: (Traver) Trevor Project is amazing. I have always loved the concept of an organization made especially to help kids who may feel they have nowhere else to turn. I know how fragile teenagers are, especially with coming out, and how important support can be for them. I've met some of the kids who have called in to the Trevor Project suicide prevention hotline and have heard firsthand how it changed their lives. Their stories are so moving and powerful. It really speaks to the work the organization does.

Seeing it is believing. And I really believe in the work they do.

Waymon: Thank you both so much for the work you are doing! Where can readers and fans get more info about your upcoming projects?

A: (Traver) Thanks so much! I hope people will take time to visit t-rains.com and buy one of our Trevor Project "Feel the Love" shirts, as well as come to support the great organizations on Dec 4th in Chicago!

(Kaya) I'm really excited to be involved in this event to raise awareness and funds for some amazing groups. Readers can also check out my official EP "Release" on iTunes and get information about dates for the Tour for Equality on my website www.kayajones.com.

Kaya Jones recently released her EP Release that features the gay anthem "Boyfriend" and current dance hit "Release the Energy". The vocal gay ally has also embarked on a Tour for Equality in an effort to increase awareness of marriage equality and other LGBT causes. Famed designer Traver Rains has also released two T-Shirts on his fashion line with portions of proceeds benefitting the Trevor Project. Belvedere (Red) and other participating brands have raised over $180 million for the Global Fund, for the Global Fund, which works to eliminate HIV/AIDS in Africa through testing, education, and antiretroviral treatments.