I am really proud of how my projects have helped me as a queer woman. 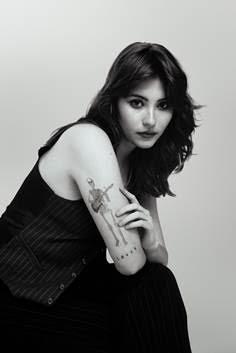 Out and proud singer Allison Ponthier hails from Allen, Texas, a suburb of Dallas and studied at the University of North Texas. She moved to New York to follow her dreams and was signed to Interscope Records.

She has released two EPs Faking My Own Death and Shaking Hands with Elvis to high acclaim. Ponthier performed these songs live at LA Pride in the Park and with Jack Antonoff’s band Bleachers on a recent tour.

Her vibe combines mental health lyrics with a melodic, sweet twang reminiscent of classic country artists. She brought her storytelling to Metro in Chicago where she talked candidly backstage just before her set opening for Holly Humberstone.

JN: (Jerry Nunn) You are from Texas originally?

AP: (Allison Ponthier) I am. I grew up there until I was about 21 years old.

JN: Did you always want to sing?

AP: I always was singing in church and pretended that I was in musicals all the time when I was younger. I was in show choir too.

AP: Little Shop of Horrors and I also love Cabaret.

JN: What do you miss about Texas?

AP: My family obviously but also Raising Cane’s chicken fingers, which are more accessible there. Every time I am on tour to Chicago I go to the local one here. I am like a Cane seeking missile when there is one nearby!

JN: So you draw pictures as well as sing?

AP: Yes on my website I made the gifs of a green fog coming out of a haunted house. I draw for my music videos to show my aesthetic to the other people involved.

I love being creative and it all winds up being a part of my work in one way or another. I am constantly pushing myself in new ways with my projects and not just musically.

JN: How was performing at LA’s Pride in the Park?

AP: I love doing Pride events. There are many queer musicians but I love cornering the market on sad lesbian music. I loved performing in a tuxedo in 90-degree weather! [laughs]

JN: We will have to book you here in Chicago for a Pride festival.

AP: I would love that. My mom is from Chicago and I came here every summer growing up.

AP: As a lesbian and also a sad girl…

JN: How sad are you?

AP: I am much less sad now. I feel like my project has really helped me identify myself more than other things in the past. My queer identity and my music coming out at the same time weren’t because I felt everyone needed to know about my private life. It was a bunch of songs that led me to come out and translate things that were hard to say out loud with the music.

I am really proud of how my projects have helped me as a queer woman.

JN: That is very cool!

AP: I think anyone who knew me before I put out music will say how much it has helped me.

AP: It absolutely is. I am in therapy and that has helped me so much but my music helps me act out the things I talk about in therapy such as bettering my life or feeling less sensitive to rejection. I get to explore who I am in a healthy way through my music.

JN: Talking about therapy is almost like coming out again isn’t it?

AP: Yes and when you hold yourself back from being who you are in one way it is very hard to pinpoint one thing. You can hold yourself back from growing in many ways. For me, holding back on my queer identity when I was younger stopped me from understanding my ADHD diagnosis or why I felt socially anxious. All those things are married to each other and a person can’t shut just one piece of themselves down.

JN: I interviewed Jack Antonoff several years ago and he’s been a strong ally for the community. How was it working with him?

AP: He has Jack Antonoff’s The Ally Coalition every year where performers come and they donate all the money to queer youth homeless shelters.

He practices what he preaches. His openers on tour are LGBT performers like myself. He’s a great example of an ally. For so people thought an ally was someone who was not hostile towards LGBTQ people and I think that is not enough anymore. Treating people with basic human decency is not ally behavior. Allies advocate for better laws, especially for trans women of color for example. It is being active, not passive.

JN: In reference to your EP, have you ever faked your own death before?

AP: No, but I have fantasized about it a lot. I wish I could see what my funeral will look like one day. I have a song called “Chasing a Feeling” and where I state that I imagine my own funeral to see how people would react.

I don’t know a single person who doesn’t wish they could start over fresh with their lives and try something in a new way. I want to move to the woods, become way more butch and chop wood while being totally off the grid. I have my dream job and my girlfriend so that will never really happen! [laughs]

JN: Where are you based?

AP: Brooklyn. I love it and have great friends there.

JN: You have another EP with Elvis in the title. Did you see the recent movie?

AP: I did and found it to be a fever dream of sound and color, which I love. My music videos are full of bright colors and textures. I am a fan of people going at a 10 and I felt that Baz Luhrmann’s directing style is at that level.

JN: Have you been to Graceland?

AP: I have when I was really little. That is what I wrote Shaking Hands with Elvis partially about.  it is about the loss of a friend of mine and also when I took a tour of Graceland. I couldn’t believe the Jungle Room and jewel-encrusted bathroom on his private jet. It was everything I could dream about then I grew up to love camp which is not shocking.

JN: How did you pick the different celebrities to feature in the video for “Hollywood Forever Cemetery?”

AP: Part of the song is about people who are larger than life and take on their own identity as pop culture icons. The two people that I thought of immediately were Elvis Presley and Marylin Monroe. Sometimes when people are immortalized as an icon others forget they are human.

In the song, I talk about a celebrity having a secret tattoo and going joyriding when they were 15 years old. At the end of the day, these icons had thoughts in their head like anyone else.

I wanted the video to feel warm, happy and welcoming. It is a reimagined afterlife for people who weren’t appreciated in showbiz when they were alive.

JN: Did you see Netflix’s Blonde?

AP: No, but I do believe the way she was treated was wrong, even the way she was buried wasn’t respectful. Someone wanted to be buried facing down on her and they let him. That is why she is the subject of my song because even in death she deserved better.

AP: Yes and she was Jewish, which I think is very interesting. She was beautiful, talented and complicated.

If she were around today I hope she would be treated better and that is my hope for all women in entertainment.

JN: Is it hard to perform some of your personal lyrics at a concert?

AP: Yes and performing, in general, is scary. It is everything your brain tells you not to do like going in front of people and sharing things you care about.

I thought I would hate it, but have been surprised how much I love touring. I didn’t tell anyone how I felt when I started so I wasn’t perceived as a big chicken, but now I really love it. I have fans that I empathize with and even met someone on the way to the venue today.

I thought when I performed I would have to look away from people to not feel nervous but instead I now look at their face to see them smile. That has really helped me.

JN: I can tell you are in therapy.

AP: Shout out to my therapist who has changed my life. People tell me that I don’t seem nervous at all when I am onstage. No matter how I am acting on the outside it is all about the inside and how you are affected that matters. It is hard but I have to keep going. That is the important part.

JN: You keep on going! What are you doing for the rest of this year?

AP: I am going to finish this tour and then continue writing. I have some songs finished so will be releasing more music in the future and will be preparing for that!