We are a band with complete freedom of expression, so there are no rules. 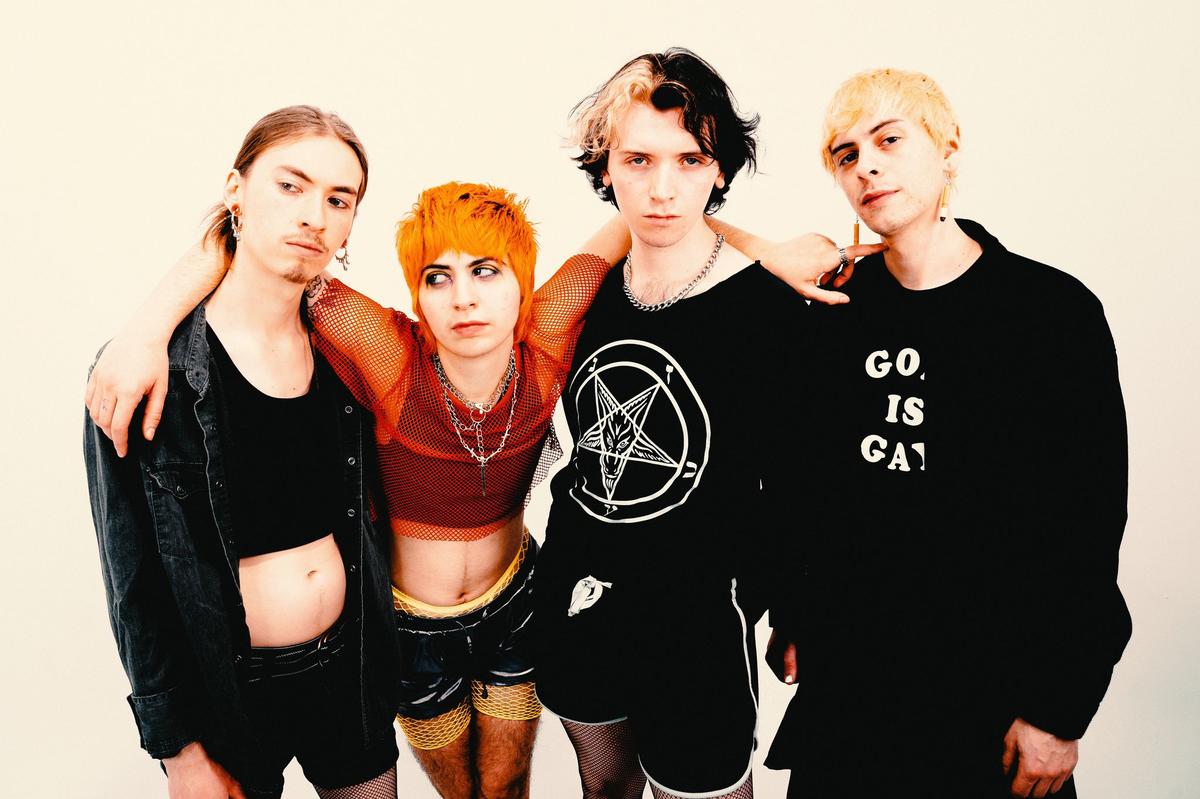 Pollyanna is ready to slime you with rocking tunes while out on tour this year. This four-piece band from New Jersey mixes genres of music such as pop, grunge and punk to keep listeners guessing.

Out and proud queer lead singer Jill Beckett [she/they] sat down at Beat Kitchen in Chicago to discuss the meaning behind songs like “Slut” and what Slime means to them.

JN: (Jerry Nunn) Have you been to Chicago before?

JB: (Jill Beckett) Yes, a few times. We used to follow other bands’ tours that sounded similar to our music and hand out CDs outside their shows to gain fans.

JN: How long have you been a musician?

JB: Dan McCool started working together as a band when we were 14 years old, so eight years ago. We started Pollyanna in 2017 when I was a junior in high school. The sound and lineup have both changed immensely. Brandon Bolton and Jack Rose joined in 2019.

JN: So you always wanted to perform for a living?

JB: Yes and it happened very organically. My dad has been playing guitar his whole life, so I have been around music since I was born. I fell in love with the instrument at 12 years old and started playing for six hours a day.

I saw the band Paramore play at Madison Square Garden and I told my dad that I wanted to do that. My friend asked to start a rock band and so I did. I never turned back!

JN: I tried to play guitar in college, but it was really hard.

JB: It is not easy and now I teach guitar at the School of Rock so I know how it can be difficult.

JN: Your song “Slut” is about ending slut shaming?

JB: Yes, that is the whole idea. Out of all the songs that one took the longest to write. There were a lot of questions as to what it would be about.

I initially wrote the song because of my sister who had been working at strip clubs for a long time. I was out as gay since I was 15 years old. My parents are accepting of us but they are old-fashioned Italians. When our relatives called her a slut I thought about how technically I had more partners than she had. She was called that because of where she worked. I felt that was wrong.

JN: What would you like people to know about Pollyanna?

JB: We are a band with complete freedom of expression, so there are no rules. I never wrote music to be in a box. When I tried to do that it didn’t work.

I write music to feel better about myself and if it connects to another person then that is us winning. Our music has a vibe and it is a form of expression. There can’t be rules to the expression.

Our music is bold and is about the things that people are afraid to say. That is what our album Slime is all about!

JN: What is your favorite part about touring?

JB: Meeting new people while out on the road.

JN: I noticed how friendly you were at the merchandise table tonight.

JB: I am the most social and extroverted person in the band. My drummer came up with the idea to buy a notebook for the first day of touring. He writes down the venue and the date. We have different pens for the fans to be creative to write or draw anything they want in the book.

Every night has a different vibe with all kinds of styles and art. The energy is different in every city.

JN: What are you going to do with the book at the end of the tour?

JB: We might scan it and post it online. We will definitely reminisce about the book after the tour. People wrote some wild things in it so far!

JN: Many bands tell me how merch is where they make the majority of their money these days.

JB: It is so important. I am always going to buy a band’s merch when I see their show after this.

We are the opening band on our first US tour. It can be a struggle being the lowest band on the totem pole. That one t-shirt sold can go a long way.

At the beginning of the tour we bought a small amount of merchandise but then sold out of most of it, so bought more.

JN: I heard that the supply chain has been tough to obtain merchandise orders for tours with everyone out on the road.

JB: The industry shuts down from December to January then tours pick up in February.

JN: Is there an item you would like to have on your table in the future?

JB: There’s a shirt we like that has a boob on it. We would like to have green slime socks too. We have done beanies before so hopefully again. Bootie shorts and a crop top would sell well also. A pair of shorts with Slut on the butt would be in high demand!

JN: Is the slime inspired by Nickelodeon?

JB: No, but I do like SpongeBob SquarePants. Slime represents messiness and something gross. We started writing the album and it was more aggressive and angry. The name Slime immediately came to me during practice.

Our first song on the album “Pixie” has the lyrics “flip the smile turn right into slime.” We present slime as something raw and in your face with feelings.

JN: The band name Pollyanna is a name referring to something positive.

JB: Dan my drummer named the band Pollyanna. We were 17 and he looked in the dictionary to come up with a name. Pollyanna means “to be unreasonably or illogically optimistic.” That is completely us. When we didn’t know what we were doing we still believed in ourselves. Reality has hit us in the face over the years but we still have Pollyanna energy!

JN: I thought it was possibly a play-off of polyamory.

JB: It is not, but I have been writing songs as to why monogamy exists in society. I have had my struggles in relationships to figure out why I have a love for multiple people instead of just one. I had to come out about that as well to people since I was about 18 years old when I began feeling that way.

JB: We are finishing out this tour. We have a long tour because we leave the other bands in California and then start driving back to Jersey with other performances along the way. We don’t get back home until October 10.

We really want to do a Halloween show and have dressed up like The Powerpuff Girls in the past. I was Blossom. It was a good time!