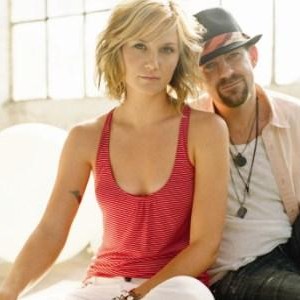 Grammy Award-winning duo Sugarland are spreading lots of Christmas cheer this year with the release of their holiday-themed record Gold And Green. The album includes five original songs co-written by lead members Jennifer Nettles and Kristian Bush, plus classics like “Winter Wonderland,” “Silent Night” and “Holly Jolly Christmas.” Also, with the purchase of Gold And Green, fans will be able to access exclusive content and the chance to enter special sweepstakes.

This is the second release of 2009 for the country duo, who’ve sold over 8 million records since exploding onto the music scene in ‘04 with their debut album Twice The Speed Of Life. In August of this year, Nettles and Bush released Live On The Inside, a CD/DVD set of live tracks, covers and footage from their tour. Sugarland’s impressive discography also includes the multi-platinum smashes Enjoy the Ride (2006) and Love on the Inside (2008). In the short span of five years, the duo has been honored with trophies from the Grammys, American Music Awards, Academy of Country Music, CMT Music Awards and the Country Music Association.

Here, Nettles lets us in on some of her most personal thoughts on what Christmas means to her both musically and spiritually.

Q: Does singing Christmas songs bring back feelings about how you felt about Christmas as a child?

A: I think Christmas in general--be it the music, the colors, lights, Santa--all of it brings out the child in everyone. It's a time of excitement, anticipation, and belief in something magical. I believe you can hear some of that child-like playfulness on parts of this record for sure, particularly on "Nuttin” For Christmas.”

Q: Did you try to convey a specific message or feeling about the holidays through the original songs on Gold And Green?

A: Part of the beauty of Christmas is all of its different and varied images. There are the symbolic traditions, like gift-giving, decorating the Christmas tree, and dealing with family madness. Then, there is also what I would call the "inner room": the deeper spiritual and emotional portion of Christmas. The celebration of relationships with family, friends and loved ones. The search for peace. The lament of loss throughout the year. The homecoming. The inspiration and promise of newness and self- redemption in the religious tradition, through the symbol of the Christ child. All beautiful images. We tried to explore both aspects of Christmas on our original songs. We wanted to celebrate the fun and honor the sacred.

Q: How do you get inspiration to write an original Christmas song given that your subject is predetermined by the specific time of year?

A: While the Christmas holiday is relegated to a certain time of year, the themes that the holiday inspires are timeless and ever-present. That makes it convenient and easier to capture the "spirit of Christmas.” Though, we did help ourselves out in the studio process by hanging Christmas lights, burning Christmas candles, and putting a Yule log video on the TV monitor.

Q: Do you have a favorite version of a Christmas song sung by a specific artist, like maybe Nat King Cole singing “The Christmas Song,” Eartha Kitt doing “Santa Baby” or Band Aid’s “Do They Know It’s Christmas?”

A: Oh God! All those you mentioned put a big smile on my face! I mean, can we talk about "Do They Know It's Christmas?” Hysterical! What a wonderful concept and charity, but at the same time, it cracks me up. I remember the video in all of its 80’s-crazy-fashion glory. But then the artists were all so serious. Later I remember thinking, "Well, no, many of these children probably don't know it's Christmas because they aren't Christian. They're Muslim and Buddhist and Hindu."

But, that was my young 80's mind taking it literally, being bitchy and political. Now, I absolutely love the song.

A: We started a new tradition in my family: the soup party! Everyone brings his or her favorite soup, and we have a big soup buffet. It's fun because you get to try lots of different kinds. And, it keeps one person from having to slave away all day and consequently allows us to focus on enjoying each other rather than entertaining. Plus, the take-home leftovers are awesome the next day!