I had to sneak out of the house to take the Red Line for the first time when I was in high school. 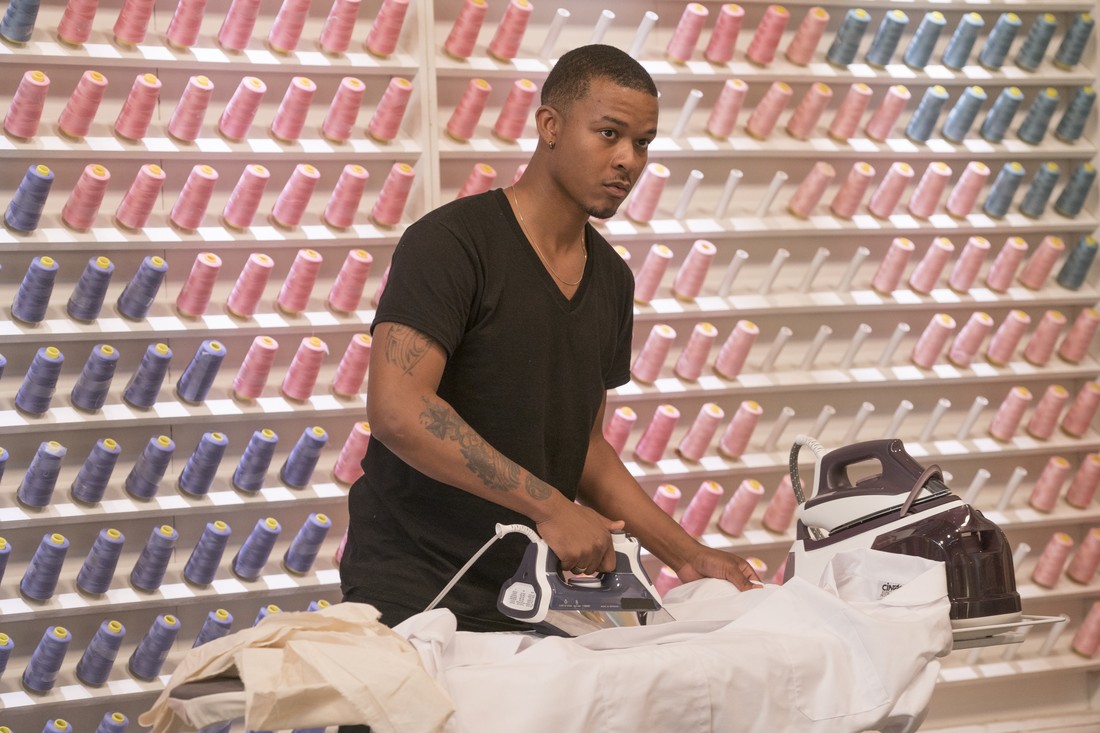 Project Runway is launching an epic 18th season on television this year. Fashion designers compete on TV and are eliminated every week for a chance to show a fashion collection at New York Fashion Week.

The hit reality show as originally hosted by supermodel Heidi Klum on Bravo TV, then switched to Lifetime for 11 seasons and returned to Bravo for the 17th season and continues there now.

Delvin McCray is one of several Chicago contestants on this current season. He majored in fashion design at Columbia College Chicago and competed in the Driehaus Design Initiative Competition in 2016.

McCray sat down to talk Project Runway in Chicago the day his retail store opened in the Downtown area.

DM: (Delvin McCray) Born and raised. I’m from the South Side, Englewood.

JN: Did you always want to do fashion?

DM: I had a secret love for fashion, but I was trained in the arts, In high school, my professor took me under her wing and started teaching me painting, drawing and I did dance as a hobby.

When I went to college I went to NYU for fine arts first, then got cold feet with the arts degree. I switched to film, then nursing and fashion later.

I didn’t want to fail at something I wouldn’t enjoy, so I moved to Columbia College Chicago. The rest is history!

JN: It’s a big investment to work in fashion isn’t it?

DM: Yes and all on my own. I’ve not gotten a dollar from anybody. I went from zero dollars to my first custom client. The first dress I made was a bride’s maid dress for $200, ever since then, I have just built and built…

JN: Your bio describes a strict childhood. What does that mean?

DM: My family is religious, but the strictness did not come from religion. It came from living in a dangerous neighborhood. My mom thought it was best to keep the kids inside. I could never spend the night at a friend’s house or hang on the other end of the block. We had to come in when the street lights came on.

I had to sneak out of the house to take the Red Line for the first time when I was in high school. I always kept myself busy with after school programs. I was in sports and dance. It was anything to keep me out of the house so I wouldn’t have to go home.

JN: What kind of dance?

JN: We have such a great dance scene in Chicago. I just spoke to someone from The Joffrey Ballet the other day.

JN: What did you learn from Columbia that paid off in real life?

DM: Columbia was great because their professors were people either retired or still working in the field. I had real life connections and experiences. It was not just a pretty picture of what people think. I learned it was a business first and 10 percent creativity. You have to make money. That was the best part of Columbia. College laid the foundation of everything. I learned everything I needed to know from the experience of being in the industry later.

JN: How did you designs get in British Vogue?

DM: They contacted me. They found me on my website and asked if i wanted to be featured. I sent over photos and it happened.

JN: Were you a fan of Project Runway before?

DM: I was. When it was on Lifetime, I grew away from it, because it was more reality with a lot of drama. The focal point of fashion really wasn’t there, so I lost interest.

I applied for a season two years ago. They didn’t even bother acknowledging my application. Two years later, I actually got on it. I didn’t expect anything. I was over it.

With me, if I don’t get it when I want it, then I lose interest.

DM: It’s a process. I was waiting on the next step. One thing led to another, then I was on a plane and being flown there!

JN: Did you know any of the other Chicago contestants before the show?

DM: No. I stay to myself and I’m a workaholic. My social life is down the drain. I could have known them, but I am always behind a sewing machine.

JN: Describe your brand to people.

DM: My brand is unique. The Delvin McCray line is my high end designer, price point line. Most companies have a bridge line. It’s a more affordable price point. My dresses run like $350-$400. It helps the customer that can’t afford my high end brand, but still want designer pieces.

Instead of having two separate brands, I have the designer and the other line infused into one.

A customer shopping in my store may not be able to afford a $3,000 jacket, but there’s a $200 jacket with the same company and same esthetic. They can still get part of the Delvin McCray brand at an affordable price point without leaving the store. Many customers buy one expensive garment and style it with more affordable pieces.

Along with that, I offer sizes from double zero to a size 28. If a customer is larger than that, they can request a garment in their size. I want to encompass as many people as possible, regardless of size or income.I want to dress people and make them feel good about themselves!

DM: I also want to keep the quality. I’m an old soul. I take a lot from ol’ school designers in upholding tradition. I love tradition because if you keep breaking rules, then you will have chaos. You have to have control. It is going back to the old days and building bonds with customers. It’s a one on one situation and not about making money. Some billion dollar companies don’t listen to their customers.

JN: Was there a designer that influence you?

DM: Alexander McQueen. He reminds me to continue being an artist. A lot of things like inspiration and the way we think are very similar. Some of my sketches that I made back in college are the same as what Alexander McQueen makes. I should have done it, but I was afraid. It’s again that reassurance that I am now doing the right thing.

Dior just reminded me of my training in haute couture and all the tradition and elegance with timeless pieces.

Those two designers fused together equals me.

JN: Have you seen the McQueen documentary?

JN: I read that Japanese manga is your jam.

DM: It’s my escape from reality. Those comics are the gateway to not focus on the negative things in this world. It’s super powers and things that are not real. It’s fun to dream!

JN: I was at the Driehaus Foundation event that you showed a collection at in 2016. Were you just out of school back then?

DM: Really? I was in my last semester in college. That was amazing. I’m still in touch with the whole team. I let them know about Project Runway.

JN: How are you with the LGBT community?

DM: I’m supportive of the community.

JN: Do you work at Saks Fifth Avenue?

DM: I did. I don’t work there anymore. It was an eye opener working in luxury retail. I got to see how customers operate and was in the trenches. I had the opportunity to listen to valuable feedback. I could see what the company could improve on and what was missing that wasn’t being offered. I got to understand the Chicago market as a whole for that price point.

It helped my brand a lot. It opened my eyes to things I didn’t take into consideration, such as infusing more urban design into my clothing line. It broadened my horizon.

DM: Yes, my first retail store that’s brick and mortar on the first floor. I had to resign from Saks because it’s a conflict of interest.

JN: How is business?

DM: I just opened. The response from customers is good so far.

JN: Are you having a big party for the premiere of Project Runway?

DM: Yes. I am planning one and it’s still in the works.

JN: We have had a good representation from Chicago on Project Runway, but many of them move away after the show airs.

DM: I am not. I am staying here! There are too many opportunities in Chicago. I’m giving Chicago something it’s never had, which is a taste of what New York is, like those industry level fashion shows. I will give them a reason to dress up for events and nightlife fashion. We could use it. There’s a lot of stuff to do here and there’s no place like Chicago.

I don’t like to follow trends, so I am not going to New York or California. I’m staying here!

JN: What are your goals?

DM: I want to get my brick and mortar store to run successfully. I want to open up a second shop in LA or New York. I want to have a presence readily available to connect with customers.

I want to work on the TV show Empire. They actually shop for my brand, as well as getting custom pieces for actors and actresses.

JN: I know Empire had several drag queens from the community on recently.

JN: What was one thing you learned from Project Runway?

DM: I felt like I evolved as a designer. The critiques that I got helped me. I haven’t critiqued since I was in college, which was three years ago. Hearing constructive criticism from people that actually know what they are talking about was good. It helped me clear up some faults that were part of my design aesthetic.

I’m good to go now. The floodgates are open with creativity!

Project Runway struts down the catwalk on Dec. 5 at 8:30 central on Bravo TV.