I think that was the first time I had ever been spanked! 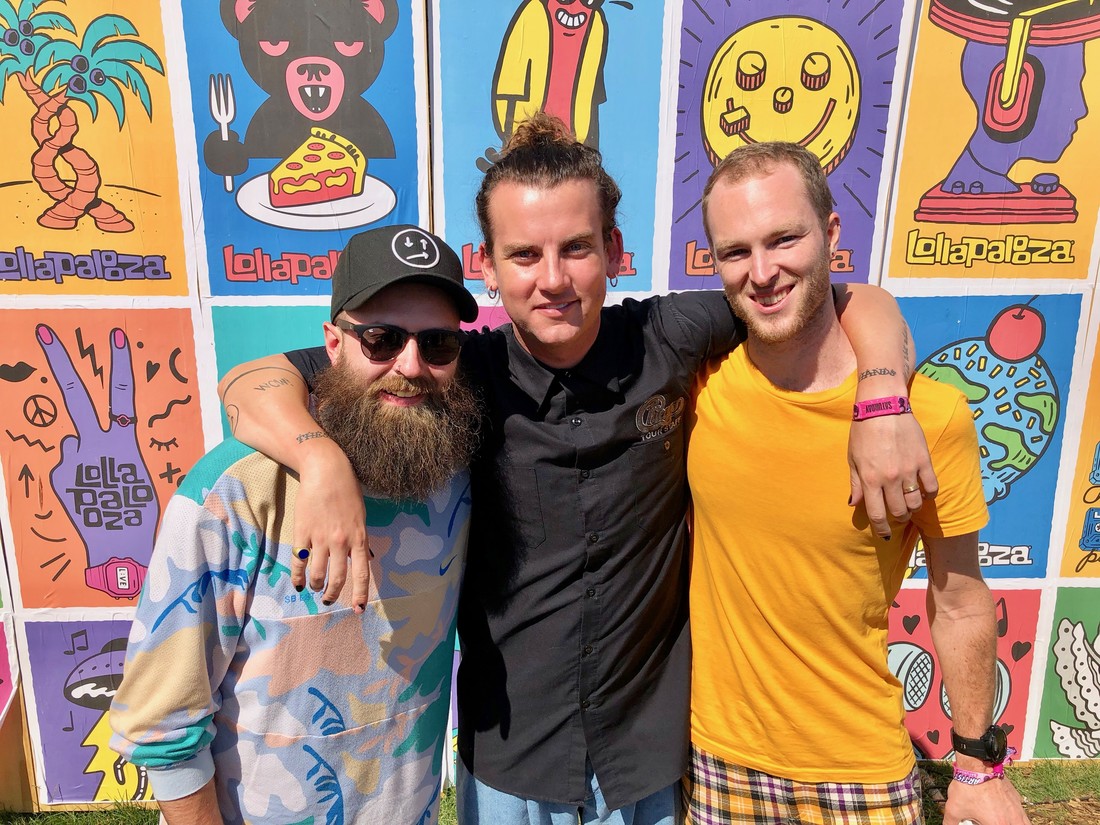 Judah & the Lion is an alternative band from Nashville, Tennessee. The trio is made up of Judah Akers, Brian Macdonald and Nate Zuercher. Their latest album is called Pep Talks and features country singer Kacey Musgraves on the track “Pictures.”

They stopped during Lollapalooza to talk about Musgraves and more…

JN: (Jerry Nunn) you are named after Judah from the bible. Are your parents super religious?

JA: (Judah Akers) Yes. I grew up in the christian faith. That is where it came from.

JN: Is everyone from Nashville?

NZ: (Nate Zuercher) We met there in 2011, when we were going to Belmont University. Judah is from Cookeville. I am from Colorado Springs and Brian is from Chicago.

BM: (Brian Macdonald) I grew up in Wheaton, which is a suburb of Chicago.

JN: I grew up in Hendersonville, Tennessee.

BM: That’s where Taylor Swift is from.

JN: Yes, she went to my school. Nashville is hopping these days. Does everyone live there?

JN: Your album was recorded there?

JA: Yes, from the start. We have always been collaborative and created out of Nashville.

JN: Do you have a favorite place for barbecue in Tennessee?

NZ: Martin’s for me.

JN: Is Nashville the reason you wound up working with Kacey Musgraves?

JA: I think because we were in the East Nashville community and that’s where she is from. We volunteered at Bonnaroo six years ago and caught her set. That was when “Follow Your Arrow” was hitting. I was obsessed with her last record. We were in the studio listening to it. I wanted Kacey to represent my mom’s perspective in the song. We randomly got ahold of her team. I think she was in Asia when they got her the song. She ended up liking the story in the song. She came in and we recorded it. It was pretty seamless.

BM: We timed it really well, before she won a Grammy.

BM: It was fine. It was kind of like take your mom to work day. It was fun for them to see what shooting a music video is like. We requested to include them. We all have good relationships with our moms, so it was fun.

JA: It’s funny because Nate gets spanked in the video. It’s only one shot, but it took a lot longer than you would expect. His mom was so reluctant to do it.

NZ: She was in the room and the director yelled, “Spank him harder!”

NZ: It was awkward.

JA: That was the funniest moment for me.

JN: Were you guys wearing diapers in the video?

JA: We made cushion diapers.

NZ: We were sewn up into big diapers with safety pins in the front.

JN: My mom is a fire and brimstone mom. Is that the case with you?

JA: My mom was more of the rebellious side of that.

BM: My mom was a good balance. She was never super strict.

NZ: My mom is really sweet. I think that was the first time I had ever been spanked!

JN: My mom used the fly swatter on me.

JA: My mom used to spank me every day after school.

JN: Nashville is a special place.

BM: Do you go back there much?

JN: I try to go once a year. Did you guys come up with the treatment for “Why Did You Run?”

JA: A lot of our community whether it be producers or people we work with are from our college days. They are our best friends. The guy who has done every single video of ours is a best friend that fuels everything we do. He had been obsessed with different variations and outlets of video that use claymation and stop motion. He also like weird animation that was ethereal. His name is Mattew DeLisi and he had the idea.

The song and its narrative is heavier, but feels happy and like a dance song. He wanted to flip the script and make it a claymation couple that was falling in love.

JN: It reminded me of Tool videos or Peter Gabriel.

BM: I could definitely see that.

JN: What is the experience of Lollapalooza compare to Bonnaroo?

BM: It’s different. I came to Lolla in high school, growing up here. I like the fact that it’s situated in the city. It’s a good location. That’s a big piece to the festival and gives it a vibe. Lolla has a really upbeat feel. People are staying in the city and coming in every day.

In Bonnaroo, you are going out there over an hour outside of the city. Everybody is isolated and you can’t really leave.

JN: I heard Bonnaroo is hot.

NZ: It is. This year for Lolla doesn’t seem as hot as it normally is.

BM: People don’t shower, where here people go home or to their hotel and shower. They come back ready to go!

JN: Was there anyone you were excited to see at Lollapalooza.

JA: It was really cool to open for Twenty One Pilots a couple of years ago, so now we get to be back with them playing here. They play right after our set. It feels like we are opening for them again. They are sweet dudes.

BM: They are friends of ours playing like Lauren Daigle.

JN: When I met Lauren she thought she knew me. Maybe it’s because we are both from the South.

NZ: Lauren filled in for us as a singer. We had a female singer back then and we needed some help. She came in and did it. I think there were 200 people at that show.

JA: We are releasing a new song from the record, which we are excited about. The North American part of the tour starts as well. Lollapalooza is technically the start of it, but the official headlining set starts in Memphis next week. We are back in Europe after that. We want to push this record and see what happens.

Look for the Lion at the Aragon Ballroom on Nov. 2 with tickets at JudahAndTheLion.com.